Cold and windy it was and little did we know what the following morn would bring - so on balance, the cold (0°C with wind chill), windy, and thankfully dry day was to be enjoyed. I had cycled out from Chester using the same route that Ivan, Ray and I had taken on that fateful 31st January. As I turned into Pentre Lane, I carefully took "Davenport corner" before the slog up the steep hill into Llay. I found a back way into the Alyn country park and as I crested the Alyn valley again, there was George in his car looking perplexed for a non-existent car park. He was near but so far from where he should have been. There were only five brave souls out today: Petar, Dave H, Jim, George and myself. Jim and I each had sort of prepared a route but given the cold and strong E wind a non-mountainous ride was decided upon with the lunch destination of Derwen College at Gobowen. 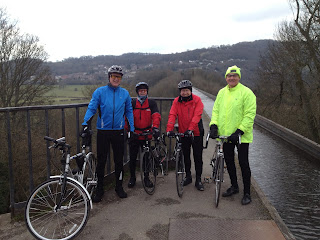 There is no easy way to miss Wrexham, so the route was via Maelor Hospital and Bersham before finding the aptly named Corkscrew Lane and along into Ruabon. Out towards Cefn Mawr, I had suggested we access the canal via the aqueduct to negate the slog up towards Chirk.

We continued canal side walking one dark tunnel before avoiding the 400 yard one in Chirk. Out past Chirk Bank I wondered if the canal path was passable further on to miss the A5 roundabout. A group of walkers confirmed it was muddy as evidenced by their boots. So up the incline to the A5 roundabout and a short section of the St Martin's road found us riding parallel to the A5 and soon into Gobowen. The Derwen College café was busy and as usual, the service was friendly, fast and fulfilling. The return route was on the little lanes via Hindford then NE to Overton. Rolling fast down the main road out of Overton and over the Dee, we take the back way to Sontley and wend our way back through central Wrexham to the Alyn. A round trip of 41m, but for me, the very pleasant day out was marred by a rear wheel puncture at the bottom of Marford Hill on my way back to Chester.
See route map and/or gpx file download.
CA

Posted by Gudfadirin at 15:50 No comments:

A light frost greeted the early risers, but this soon melted away as we made our way down the lanes to the Ice Cream Farm. The group of 10 consisted of Dave H, Petar, Trevor, Brian Mac, George, Paul, Colin, Keith, Mike G and Jim. 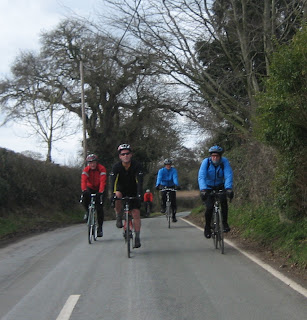 We were joined for coffee by Ivan who is making good progress and now limping well with his stick.
It was decided to head for Whitchurch via Tilston and the Wyches and we made steady progress until the downhill just after Carden Park. At the bottom of the hill we turned left for Tilston when Brian informed us that we were 3 members short. We stopped in a lay-by while Brian returned to investigate, coming back later with the news that there was no sign of Trevor, Dave and George. Calls to the respective mobiles brought no response and we presumed that they had missed the turn and gone onto Stretton. No problem as the lane went back to Tilston anyway, so we set off to wait at the Carden Arms. Still no phone contact after a lengthy wait so we decided to continue and hope that we met up for lunch. It transpired later that Trevor had punctured well before the junction, which was why Brian hadn't been able to find them, and some phones were back at home!
The main group continued on through Lower and Higher Wych to join the A525 just west of Whitchurch. Lunch was taken at The Black Bear next to the church on top of the hill. Still no sign of our colleagues, and no phone contact. They had made their way along the lanes but couldn't recall which pub we were in, so lunched at the one with the grumpy landlady (now apparently replaced by a much more pleasant landlady, so could be back on the radar). 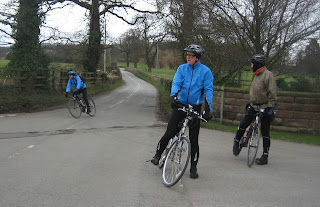 The main group set off back to the east of town, up the hill towards Marbury, then Bickley Moss. At this point we came across a 'road closed’ sign but decided to keep going anyway. As we approached the canal bridge we could see threatening signs of cranes and large concrete culverts-more than just a bit of tar and chipping then! However, Mike used his charm and we were allowed to walk our bikes over the temporary structure to the other side and off towards Cholmondely.
Then another 'road closed' sign. Once again we ignored it to find that the roadway had been partially washed away, presumably as a result of recent heavy rain.
A steady push up to the top of Harthill was rewarded by a long downhill back to the Ice cream Farm for afternoon tea. About 36 miles or near 60 for those from Chester.
A chilly but mainly dry day, marred only by the misunderstanding early on, which only reinforced what we have learned from previous exploits-keep together and keep the phones switched on!
JD

Posted by Gudfadirin at 15:33 No comments:

With a rainy overcast sky forecast throughout the day, it was a very welcome sight for me to see 10 riders raring to go at 10:30 from Ness Gardens.  There has always been a good turnout from this cafe over the years, even though routes are somewhat limited from Ness.  Here was me thinking it was because I was leading this time, until George pointed out what a lot of us like about CER; they meet every Thursday, whatever the weather, and that is a real motivator.  Clive, Dave H, Dave P, George, Jim, the 2 Lizzies, Roy, Paul & myself were joined by a CER virgin, Keith.  We set off north, waved off by Martin, who was only here for the coffee. 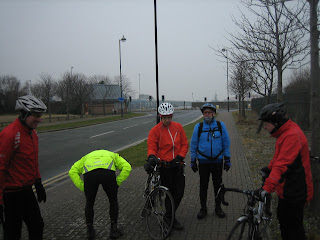 There are only two ways round the Wirral and both have been done by CER; this time I tried to go clockwise around the peninsula, utilising the plethora of lanes along the western or Deeside coastline.  There were no dramas reported before we reached The Magazine pub in New Brighton, a proper old boozer we had visited a few winters ago.  Reactions to lunch were mixed, but all agreed that the Real Ales on tap were 1st Class. 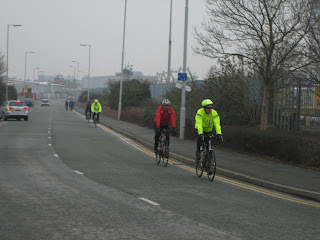 Heading south along the banks of the Mersey, we passed New Brighton’s very own “Black Pearl”, a half size pirate ship breached above the high tide, built by local artist Frank Lund & Major Mace.  Constructed entirely from driftwood & items washed ashore, it’s worth checking Google & Flikr for its provenance.
The tandem picked up a puncture by Twelve Quays & while we were waiting, Clive did his impression of an ostrich, immortalised forever on camera.  The return was via a drab Cammell Lairds, now in full swing fabricating offshore wind-turbines.
After Eastham, Clive and Roy peeled off to Chester; while the rest of us wended (is there such a word?) our way back to High Tea at Ness, having clocked up 41 miles, a record for a Wirral Circular.  Next time, the new Sustrans path from Neston to Shotton will be finished, opening up the possibility of different routes from Ness.
BMac
Posted by Gudfadirin at 21:16 3 comments:

The early risers were met with a fairly heavy frost, which soon melted away as the group assembled at Hildegard’s. Both new members returned for another ride, not having been put off by last week’s headwind. Petar and Dave R, were joined by Dave H, Clive, Martin, Liz, Andy, Ray, George (recently back from the fleshpots of Thailand), Dave Hill (on his way to work), Dave M, and Jim. After a brief discussion the choice was either a trip round the Wrexham industrial estate, or a visit to the Red Lion in Ellesmere for a two course pensioner's special £5.50.
We set off for Ellesmere only to find that Dave M had a puncture right outside the Cafe. A little later than normal we set off again, making for Farndon and Tilston. The plod up the hill into Malpas wasn't too bad without the usual southerly wind and we were soon racing through Lower Wych onto the A525 crossing at Eglwys Cross. The back lanes west took us to Hanmer village where we picked up cycle route 45 down into Ellesmere.
The Red lion service was as speedy as usual with Ray at last being able to claim his pensioners’ rights.
The sun shone benignly as we retraced our steps briefly as far as the Penley turning, crossing the A525 again this time at Holly Bush, heading for Worthenbury. This being the end of February we have been beset with hedge cutting this last few weeks, and this week was no different. Fortunately a short diversion allowed us to by-pass the obstacle, and we reached the village without incident.
The usual route from there north to Shocklach and Farndon had us all commenting on the pleasure of being able to ride on quiet lanes in pleasant countryside. Back at Hildegard’s the afternoon coffee and cakes set us up nicely for the short drive home, or ride in some cases. 40 miles in all or about 64 from Chester. But what a difference in the weather - dare I say it - has spring finally sprung?
Incidentally, talking of thorns, it is the responsibility of the local Highways Dept to ensure that any hazardous material deposited on the highway -thorns or mud - is cleared up by the perpetrators: just give the council a ring with exact location and dates.
JD

Posted by Gudfadirin at 21:07 No comments: