It was cool, dry and very windy as we congregated at Hildegard’s. Dave H, Dave & Liz P, George, Paul, Petar, Ray and myself. Brian Mac and Martin were out on a separate ride.
Dave H enquired as to whether anybody had any suggestions where to go and being the first with the Queen’s Head was duly handed his latest GPS equipment in the form of OS Map sheets 117 & 126 to plan a route. After about 10 minutes deliberation taking account of the windy conditions we were of meandering our way along the lanes towards Sutton Green. On through Bangor on Dee then gentle climbs and dips with a tail wind taking in the lanes east of Overton via Cloy Hall, Adra felin then on to Dudleston Heath. After a short left and right in Dudleston Heath we made our way onto Greenbank, Higher Ridge, Perthy and Welsh Frankton. Panoramic views, of the distant Welsh Hills, Briedden Hills and the Long Mynd area to the south were observed. Lower Frankton soon followed and we passed over the Montgomery Canal on a ‘severe’ humpbacked bridge. Queries on how far to the Queen’s Head were being received, so I decided not to extend the run via Haughton and Grimpo but head straight on through Rednal where for about 3 miles we cycled against a strong headwind to our lunch.
Rested, well fed and watered we returned via Tetchill and Ellesmere with a following wind. As we headed towards Overton Dave & Liz P decided they would return at their own pace, so keeping the wind in our favour, the remainder of us turned right pedalling onto Penley and Threapwood. We continued on through Chorlton, Horton Green and Tilston returning to Holt for afternoon tea just before 4:00pm having cycled 50 miles. For those from Chester they would eventually cover 70 plus.
MG
Posted by Gudfadirin at 16:01 No comments: 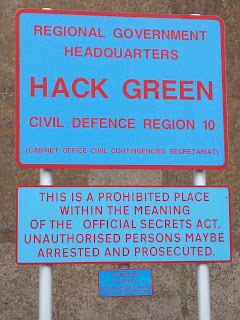 I was going to be late arriving at Rose Farm, but those assembled therein kindly agreed to wait for me. It transpired that a proposed lunch venue had been agreed upon, the Bhurtpore pub in Aston, but the assembled group were looking for a road pilot and I fitted the bill! Ivan was there in "four-wheel drive and stickless pedestrian" mode dispensing the residue of the shirts, and Dave M was in "just a cup of coffee mode" before yet another Iberian cycling sojourn. So Dave H, George, Ray, Liz and Dave, John (a friend of Dave H) and I set off into the gathering gloom and spitting rain south bound. We cut round the back of Tarporley bound for Eaton and Wettenhall. The rain persisted and the only good news was the recent tarmacking of some of Hickhurst Lane. Skirting Nantwich by the usual water meadows route, we take the Audlem road bound for Hack Green. 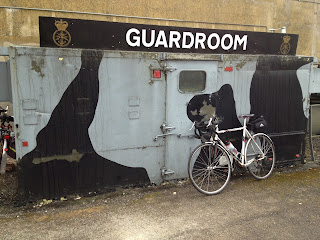 We stop at the "Secret Bunker" partly to check out if it is a possible coffee/lunch stop for future adventures. Alas No: "only if we are not busy and you phone ahead" was the response - and "we only do rolls and paninis". Decision made then! As the rain intensifies we skirt around Wrenbury from Sound rather than going down the main road. As ever the range of beers is interesting and the goat curry a hit (but a bit hot). The goat curry is obviously popular in Aston, as we couldn’t see any goats in the fields. Lunch time banter encompasses Mrs T, HST2, LDP and Council Tax. The rain has stopped and a gentle route back via Chorley and Faddiley is plotted to get us to Tilley's for tea and cake. Thereafter we make a short traverse of Tarporley High Street via Tilstone. The round trip is a surprising 42 miles, and Ray and I knock up a few more getting back to Chester in the dry.
See route map and/or gpx file download.
CA

Posted by Gudfadirin at 18:03 No comments:

It was good to see Ivan at The Gallery, well on his way to recovery, as he handed out the new Club shirts for their inaugural ride.  Plus we had the bonus of Bryan back with us on yet another cold but sunny winter’s day.  Café Talk was of riding the newly built (though not yet officially open) Sustrans path over the Dee Marshes and as some wanted a shorter ride, I volunteered to take one to Eastham Ferry.  Martin led Bryan, Dave P, Jim, Keith, Liz P, Petar, Ray, Trevor & me down through his homelands to cross The Dee at the rickety rail bridge at Shotton.  From there it was a mystery tour through Zone 3 of Deeside Industrial Estate to join the new cycle track across the marsh. 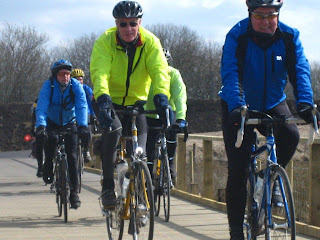 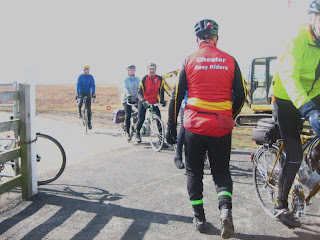 We stopped at the site of the old Hospital of St Andrews, where travellers to Ireland were given hospice at Denhall from 1231 to 1496; here Jim & Bryan were summoned home early. We eventually exited the marsh at the end of the cycleway by the best pub in Cheshire, The Harp at Little Neston.  I like to dispel the rumours that The Wirral is flat, so next came the long drag up Bull Hill to Woodfall.  From there we joined The Wirral Way through to Hadlow Road Station (closed 1956), where Trevor left us.  Incidentally, The Wirral Way there was the UK’s first designated Country Park, in 1973 and is now the start of the very popular CTC Tuesday Evening Cycles (Free advert) from 7 – 9pm.
From Willaston we headed across the peninsula, through Eastham Rake and Carlett Park, and arrived at another excellent Marston’s pub, The Tap at Eastham Ferry.  I’d wanted to bring CER here for ages, but it was not to be this time; The Tap only served toasties and crisps and as CER are a discerning bunch, we retired to the Eastham Ferry Hotel next door.  The usual 2 for £10 meals were washed down with an excellent Pedigree, while conversation ranged from nuclear war with North Korea through to the problems caused by having a welfare state.  So, CER members are gourmets and philosophers, as well as keen cyclists.
After lunch, Keith found a large hole in his tyre, which he quickly replaced with one of the many spares that Dave P carries, while the rest of us stood in the sun watching him.   Our route back towards Wales took us past Hooton Park and The White Lion at Childer-Thornton.  Now that is an excellent little pub to put on a future lunch stop.  At Capenhurst, Brian abandoned ship, leaving the remaining six to find their own way back to Hawarden, to end a sunny and easy 37 mile ride.
BMac 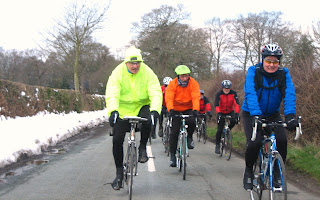 There was a fine turnout at Manley Mere despite the cold and snow.  The Mallorca contingent had enjoyed their vacation and were now sewn back into their thermals.  Andy had been chatting to the Olympics star Sarah Storey at the carousel in Palma airport. She said that she had eleven gold medals, but he wouldn’t be getting one for his chat-up lines. On his own evidence that was the closest he got to a fit rider all holiday. The full cast for today’s ride was: Clive, Jim, Mike G, Trevor, Andy, Petar, Ray, Paul, Brian Mac and myself. Dave M. couldn’t make it, but had pedalled out for a coffee and chat. Sugar Lane and New Pale were given a miss because of the conditions. The snow bank behind us at Newton Firs was a dramatic backdrop, but it appears that the dazzling expanse of white was too much for Brian’s camera. We stuck to the B5153 from Kingsley to Acton Bridge. 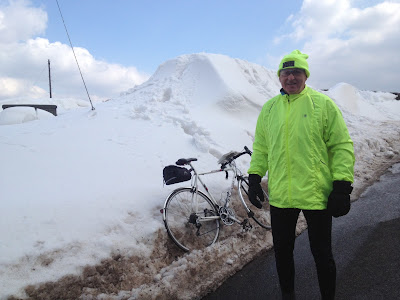 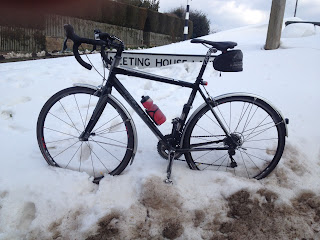 The Weaver was crossed, and then we climbed up the wooded rise from the Trent and Mersey canal, riding into Ash Tree Lane on the other side of the A533. This area was now free of snow and ice as we headed up towards Frandley. More quiet lanes meandered north and we were soon passing through the gates of Arley Hall. We turned right down the long drive where I was reminded of the time I ‘did an Ivan’ and finished up in Warrington General. I added a westerly loop down Budworth Road, right at Frog Lane and right again along Park Lane with Pick Mere below on our left.  We were now enjoying the chill east wind on a better-protected pair of cheeks! I had phoned The George and Dragon at Great Budworth the day before to warn them to expect about ten cyclists at a quarter to one, and we were spot on. There was a warm welcome inside where it was busy, but two tables near the fire had been reserved for us. The food and drink was excellent, and it was hard making the effort to leave. 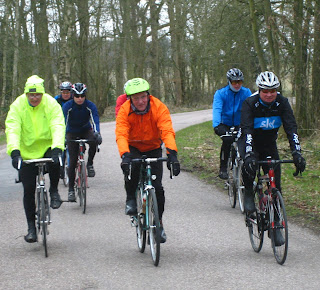 The route back was intended to be sweet and short, but I decided to do a semi-Clive, and go slightly off-piste at Comberbach. Instead of turning left just past the church we carried on to Higher Whitley duck pond via Senna, Goosebrook, Old Mill and Norman’s narrow lanes. We crossed the A49 passing Grimsditch Hall and the former Millstone pub, reaching Frodsham by way of Dutton, Aston and Sutton Weaver. Pedestrian lights changing and traffic meant Trevor following a cyclist up Fluin Lane in Frodsham thinking that it was one of us! Communication was eventually made but not well synchronized, so after a while waiting in Main Street we purchased a voucher for Specsavers for Trevor and carried on to the Netherton Hall.  A left turn up Tarvin Road was followed by a steady pull up the Ridgeway. We were waiting at Four Lane Ends when Trevor appeared. Sugar Lane was now safe for swooping down and I had a last blast behind the speeding Paul down Manley Road. Some of us had a final coffee, and Petar was about to complete a personal best of 67 miles by riding back to Tarporley. Another typical and enjoyable Easy Riders day in good company. Ride distance Manley to Manley: 45 miles.
DH
Posted by Gudfadirin at 17:42 No comments: