Extra layers were definitely called for today. It was cold enough first thing but the forecast was for a cold north-easterly in the afternoon taking the wind chill down below zero. Despite the forecast four of us met up for elevenses at Ness Botanic Gardens in surprisingly good humour. Over tea and teacakes we decided on a moderate ride with the aim of getting back to the Botanic Gardens no later than 3.00pm. Bryan suggested we ride up the centre of the Wirral returning down the Wirral Way to give us some protection from the wind in the afternoon.
With the route agreed, Bryan led off towards Neston before turning inland in Ness to take the lanes across the A540 heading for Raby. From here it was the well-established route through Thornton Hough and Brimstage to Storeton, however instead of taking the rough track to Landican, today we reached Irby via Barnston and Pensby. So far so good: the weather had turned out to be much better than forecast – cold but clear with good views across to the Dee Estuary from the high spots.
The last couple of miles to the Farmers Arms in Frankby were made in conditions suggesting that the weather might turn but we reached the pub all right. A good choice of ales and food from all day breakfast to the day’s special were available. Clive and Dave debated why the “special price” for two meals was 1p higher than the cost of two separate meals. Luckily they asked before ordering as the “special” included drinks!  Noting that the 2010 rides list was now on the blog conversation turned to the special rides.  A repeat of the Mersey Estuary ride was thought a good idea. Dave agreed to lead another ride in the Ribble Valley and Jim offered to lead one in the Peak District.
Leaving the pub we emerged to find that the weather was still being kind as we dropped down to Caldy and onto the Wirral Way.  From here it was a very pleasant ride back to Ness Botanic Gardens to finish off with afternoon tea and a mince pie before the final leg back home to Chester.
Distance from Chester and back an easy 48 miles.
BW

Posted by Gudfadirin at 20:54 No comments: 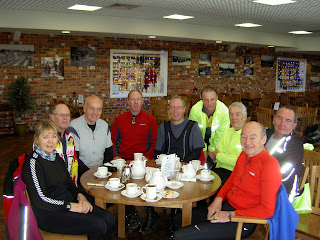 Posted by Gudfadirin at 21:32 No comments:

Despite the rain hammering on the window at 6.30 in the morning, the forecast was for an improvement as the day wore on. I set off optimistically for Utkinton, but with no sign of the rain easing by 10.30 the four of us were in no great hurry to set off and we spent more time than perhaps was strictly necessary discussing the route. Ray came up with a great idea, ‘let’s go to the Red Cow in Nantwich’, so Ray, Jim, Ivan and Clive set, following a fairly direct route, past Oulton Park to Wettenhall, Reaseheath and into Nantwich.
We rode through the puddles waiting for the promised improvement. It came eventually: as soon as we arrived at the pub!
I can thoroughly recommend the Market Day special menu, and there was no time for salads on such a day. Well fortified we set off about an hour later through the park and heading out for Stoneley Green.
The rain had given way to a freezing cold head wind interspersed with short intense showers, some of them hail. This was not a day for the faint hearted and even Xmas shopping began to take on a rosy glow in the memory banks. However we slogged on up to Peckforton by which time my little legs were feeling decidedly knackered: they’re shorter than everyone else’s!! We parted just after the castle at Beeston, with Clive heading for Tarporley and his car at Utkinton. The rest of us then set off for Hargreave and Greenlooms. There was no let up from the wind but the hedges and bends gave us some protection as we steadily worked our way to the Crocky Trail and Waverton. The A51 was crossed just below the golf course and we arrived in Guilden Sutton just as the light was beginning to tail off. Ray and Ivan took Station Lane despite the ‘Road closed’ signs (at least they weren’t riding on the footpath) while I tackled the last hill up to a hot bath.
About 53 miles from Chester: very creditable in the circumstances.
JD

Posted by Gudfadirin at 21:28 No comments:

It was a beautiful but cold day with a stiff breeze blowing when without a map between us Liz D and myself decided to get up onto the hills behind Northop.  With Liz leading the route and with a steady ascent to 800ft, we arrived at the top near to the Blue Bell Inn.  With a partial descent via tiny lanes, a near miss with a Chelsea tractor for Liz, and large hunting party blocking the lane, we turned up through Soughton towards Mold and the Glas Frynn beckoned for a well deserved lunch. The return was fast and easier retracing our route to Northop then Ewloe and back to Hawarden.  I continued back downhill all the way back to Mollington to complete a very pleasant 34 mile ride.
For route map and/or GPX file download see: www.bikehike.co.uk/mapview.php?id=26923
CA

Posted by Gudfadirin at 22:24 No comments: