Given the advice emanating from Cycling UK, it was clear that the current virus situation would affect our official club rides. Dave H has now communicated this to us all recently. However, I realise that we are, as members, gregarious characters who like to know who has been riding where. So this is a short report of the social ride that a few of us did today.

We i.e. Ray, John W, and myself, decided to meet up outside Alison's at 1000 to see who else might arrive. Steve H appeared, and was not going to join us, but rather wait to see if anyone else would turn up* ( see below)  I had cobbled together a 45 mile route out to Whitchurch and back. Thus we set off bound for Tilston via Harthill, Bickerton and Duckington. In Tilston, we had pre-arranged to meet up with Nick.

So the four of us wiggled our way via Shocklach and Worthenbury down mud-splattered lanes to the outskirts of Whitchurch. The feeding station was the tricky bit, and I had posited a stop at the service station on the Whitchurch bypass where there was a Starbucks. Nick mentioned there was also a McDonald's as well. So it was an easy choice - the toasted bun won the day.


We had to sit outside as they were only taking "Take away" orders, but apart from the fact that the temperature seemed to have dropped, it was fine for us all.

The route back was out through Whitchurch, and then down muddy lanes via Marbury and Bickerton to round Bulkeley Hill on the  way back to Tattenhall. So a pleasant 45 mile route on near traffic-free yet muddy roads. At Beeston, Nick and John headed back to Tattenhall as Ray and I headed back to Chester for 65 mile plus of social cycling. The weather held up with even sunny intervals in the afternoon.

*Steve reports that no other rider turned up, and the cafe had only three customers in.

We were going to be in for some extraordinary weather today - sunshine all day and very strong winds along with a very high Spring tide in the Mersey estuary. Serendipitously I met up with Steve H at Dunkirk. He was just riding out and back today from Kelsall, so just a 45 mile round trip! At Ness Gardens, a crowd of ten riders would eventually arrive, although John W and Steve H were just out for coffee today. Dave H and Steve T were welcoming a potential new member, Denise, who had arrived in shorts! I had already prepared a Wirral Wander ride of 40 miles, which was gratefully accepted.

So the group, consisting of Steves T and H(NM), Peter, George, Trevor, Dave H, Denise and myself, set off down to the Dee shoreline along by Nets Cafe. Here was the first surprise of the day - a debris-strewn path - a result of a very high tide assisted by a fierce NW on-shore wind. There was a digger out by the Harp pub pushing the marsh debris back off the road. In and out of the Nestons, we wiggle through the big houses of Gayton to arrive near to Poll Hill in Heswall just off Telegraph Road.

In quick succession, as it is largely downhill, we are through Pensby, Irby and Frankby (former Viking villages) to arrive at West Kirby and the railway cut-through to Hoylake and Meols. Hitting the esplanade here, we are greeted with a seething seascape of enormous rollers as it is now about the height of the highest Spring tide. The wind was very strong N Westerly, probably storm force 8-9. It had been hindering us a bit, but not now as we were literally blown down the road towards the sea wall path to New Brighton.

As we get to the end of this road, it becomes clear that cycling the sea wall path will to be dangerous with the breaking waves and high winds. So what to do - find another way inland of course. This we do by wiggling down No-Thorough roads (which weren’t) and the housing estates of Moreton. We end up along Leasowe Road where Denise takes an unexpected tumble. Although shaken and slightly injured, her bike had sustained a brake/gear lever mounting bracket fracture, and it is wobbling around on the bars. A few cables ties later we are off again heading for the esplanade which has been closed to traffic. Sea water is splashing over the sea wall with somewhat mountainous waves just off-shore. Arriving at the boating lake by the fort, the sea is in a real turmoil as Steve H(NM)'s photo shows. Negotiating the temporary sea flood defences, it is now a few minutes to Weatherspoon’s “The Master Mariner” pub and a very quick and welcome hot repast.

The route back is as per usual i.e. along the western side of the Mersey promenade. The tide height at Gladstone dock is around 33ft today with a tidal range of nearly 30ft of seawater!. The Black Pearl pirate “ship” is no where to be seen, but there was a great pile of driftwood just off the prom though. So we wiggle our way back towards New Ferry where we pause to consider how the SS Great Eastern was broken up here at the Sloyne (see Trevor's photo). The wind was still a problem for us as we cut across the Wirral via Eastham and Willaston arriving back at Ness Gardens around 1600. Peter and Denise stay for a hot drink as the rest of us disperse for home. A 42 mile Wirral circular ride today with plenty of wild weather producing a different aspect of this former Viking kingdom.

Arriving late at Cleopatra’s, having to spend my coffee and chat time sorting out my front derailleur. I was asked by the now formed Mod’s group of SteveT, Steve NM (New Member), George, Andy B, Electric Pete and Bob, whether I knew of a route to the Queen’s Head. Yes, I replied, I have one from about six years ago (2013) when I last took a tribe of CER’s to visit what was a popular watering hole. We bade our farewells to Dave & Liz P who were on their own ride, Neil who had other commitments and the Briskers.
Crossing the A534 we stopped to admire the flooding of the fields. Having to bypass Sutton Green as the lanes were flooded, we quickly made our way to Bangor on Dee then gentle climbs and dips with a tail wind taking in the lanes east of Overton via Cloy Hall. On to Dudleston Heath, when SteveT decided to try his falling off technique on one of the deeply rutted roads. Fortunately, he was going slowly and no damage done. Also, lots of ‘Muddy Puddles/Wheel Washes’ as highways were still flooded in parts from the recent storms. After a short left and right in Dudleston Heath we made our way onto towards Perthy and Welsh Frankton. Panoramic views of the distant hills were observed as the sun shone. Over the Llangollen and Montgomery canals and onto Rednal where we then followed relatively clean back lanes to the Queens’s Head.

On arrival, the car park was full and another cycling group were having lunch, their bikes were generally of the steel frame (Dawes) variety. Managed to find space for lunch, but because of its popularity food took a little time to serve. That said the quality was good as were the ales and we got away on time. Lunchtime discussions ranged from Cruises and of course Coronavirus. 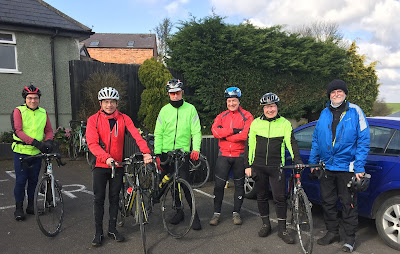 Rested, well fed and watered we returned via Tetchill and Ellesmere with slight breeze against. Onto Penley and Threapwood, where Bob advised he was ‘Cream Crackered’. Took the direct route back, through Shocklach returning to Holt by 3:40pm for a relaxing afternoon tea, just having cycled 49 miles. Overall an undulating ride, with some appalling road surfaces, but an excellent days riding.

Posted by Steve Haywood at 17:54 No comments:

It appeared that no-one was keen to write up the Brisk blog for the ride to Tattenhall from Holt this week. The brisk group consisted of Steve F, Ray and John W. So John bravely offered not only to put together a ride, but also sent me some notes of the ride itself. His notes are as follows:-

From Cleopatra's cafe, Steve F and Ray rode with me as I decided not to put together a formal route but just  chose to pick directions and go with that.  So I used  the compass on my Garmin to pick likely directions.

First choice was straight on towards a shortcut over A534 and down Francis Lane. Our  jaws dropped at the view of flooded fields which meant taking the main road around the industrial estate and straight on to pass Bangor on Dee. Chose again to alter ride and took first right after going ‘over’ Bangor on Dee onto quiet lanes to Lightwood Green and Penley.

Here we then headed towards Whitchurch, on some A roads but soon to turn off for Malpas. Unfortunately there were road works plus the cafe there was judged to be too dear! So we diverted via No Mans Heath, then regular route past Cholmondeley and Bickerton. We took the "easy" way up Harthill and a nice fast blast down to Tattenhall to stop at Alison's cafe for lunch.

We didn't ride back to Holt, but if you ride this route, it will be around 46 mls.

So, as none of us needed to go back to Holt, we took the long way round to Waverton as the less windy option. Before Christleton, we split with Steve at the Piper pub, and Ray & I rode on to the Millennium cycle path where Ray cut off for home. I press on home to get 66 miles under the tyres.

An uneventful ride with tail/side wind on way to Whitchurch then a headwind picked up on way home, so glad of team effort to take turns on the front. Good average speed and a decent  66 miles all round distance and route, with two good riders with me tagging along.