Due to sub-zero temperatures, snow and icy conditions today’s ride was cancelled.  Not to be out done an intrepid group of six met at Loggerheads for the walk up Moel Famau with not a bike in sight.  Lunch was taken at The Druids Inn, Llanferres. 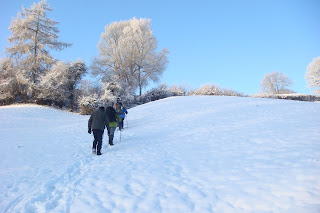 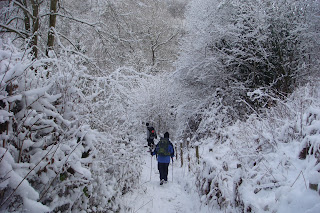 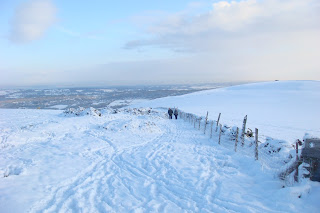 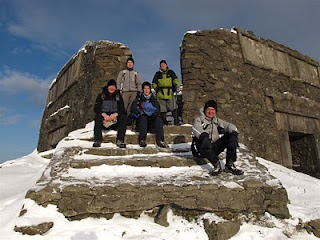 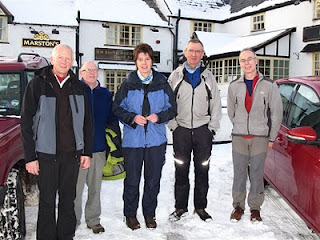 See the route as recorded on Clive's new Memory Map Adventurer 3500 gps.
Posted by Gudfadirin at 21:54 No comments:

The icebox conditions had returned today and the forecast was for worse to come.  It was therefore understandably difficult to summon up the energy for the ride out to Manley Mere in the hail!  Once there, things improved with the friendly faces of Jim, Dave Heath, Ivan, Martin and Liz making six in total.  After a chat and a hot drink the maps came out and we planned a short looping ride through the Forest with a potential stop at Cotebrook.  From here we would have the option of taking a longer route south towards Nantwich or a short route back to Manley Mere.
It was getting on towards 11:00 by the time we were on the road leading up to the Delamere Forest where a left turn after the railway bridge took us onto the lumpy road through the Forest to Hatchmere.  By Norley the weather was changing and it was beginning to warm up a little, with feeling started to return to frozen fingers.  Through Whitegate, Marton Green and Little Budworth it was really quite pleasant and such a surprise given the weather forecast.  However with our late start it was after 12:00 by the time we approached Cotebrook and the decision to stop for lunch at the Alvanley Arms was not in dispute. 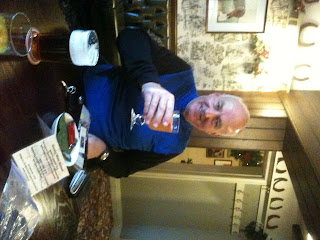 Inside we grabbed a table near the fire and made ourselves comfortable.  Robinsons Cumbria Way bitter proved tempting to most of us although Dave favoured the Pims No 3 Brandy Cup Winter Warmer to some derision from the beer drinkers.  Not enough brandy though for Dave’s taste so with encouragement from Ivan the landlady made him a brandy winter warmer special!  With everyone now satisfied, excellent food and good conversation it was soon time to leave the warm.
Outside it had turned cold again and with darkening skies we braved the trucks on the A49 before the first right brought us back on the lanes.  It also brought snow: light at first but rapidly increasing as we headed towards Willington Corner and Oscroft.  Today the weather wasn’t going to settle into a predictable pattern and before long the snow was stopping and it was warming up again!  By Hollowmoor Heath the group had split into two with Ivan, Martin and Liz in the leading group and Bryan, Jim and Dave in the second slower group.  Back at Manley Mere there was no sign of the lead group so after saying goodbye to Dave (heading back to Warrington) Jim and I set off on the final leg back to Chester to find the lead group coming back towards us having taken the B road from Great Barrow.
Only a short circular 29 miles from Manley Mere but nevertheless a very enjoyable day out.
See route map and/or gpx file download.
BW

Posted by Gudfadirin at 22:56 No comments:

After 10 days of bitterly cold and icy weather the temperatures rose above freezing in time for our Christmas Lunch celebrations at The Pant yr Ochain.  Now don’t get me wrong, it was still cold but it felt positively balmy compared to the previous week.  Five of us cycled out to Caergwrle (Clive, Brian Mac, Mike G, Ivan and I) for a hot drink and toasted teacake.  The plan was for an easy ride to The Pant yr Ochain and we soon agreed a route of just over 12 miles sticking mainly to the B roads. 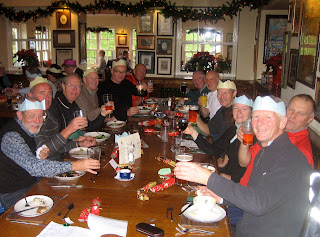 Out on the roads we took it easy, with a loop round to Hope and then the B road to the Llay crossroads before heading to Rossett where we crossed the railway line at the pedestrian crossing point.  From Rossett it was a simple matter of following the B5102 before a right at the T-junction had us heading back through Borras to Gresford and The Pant yr Ochain where we arrived at 12:15pm. 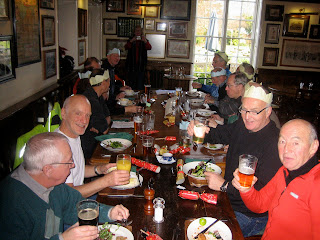 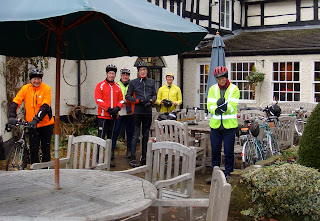 Today wasn’t about the ride though and with the recent bad weather this was to be an opportunity to catch up with friends before, during and after the eagerly awaited Christmas lunch. Inside it was good to see that Jim and Dave H had already made themselves at home with glass in hand. It wasn’t long before the others started to appear with Mike M, Dave & Liz P having cycled direct.  The impressive range of ales caused some problems in deciding where to start.  For my part the stout proved irresistible.
With so much to talk about amongst the 14 of us we were a little late settling down to eat, but once we had, the starters appeared and were quickly demolished with considerable approbation.  A few photos later and it was time for the mains: all superb and served with aplomb.  By the time puddings and coffee had been served time was moving on and with darkness less than an hour away it was time to leave for the ride back to Chester.
What a fantastic day: great to be out on the bike again, a superb meal and great company.  It’s hard to imagine a better Christmas lunch.  Well done Pant yr Ochain: we can’t recommend you too highly.
BW

Due to adverse weather conditions and icy roads today’s ride was cancelled.
BW
Posted by Gudfadirin at 17:15 No comments: