As this was my first full day back with the group after two months absence I took it easy on the ride out to the Ice Cream Farm and revelled in the early autumn countryside.  Arriving early I settled down to tea and teacake before being joined by Dave H, Glennys, Ray and Brian.  Conversation turned to the Tour of Britain and the stage through the Forest of Bowland that we intended to cross on the 11th October.  Dave reassured us that it wouldn’t be too strenuous once he had sorted out the route!  With that we turned to today’s ride and Ray’s plan for Market Drayton, but as this was my first day back something a little shorter was called for, so we settled on a joint ride to Wrenbury where those wanting the shorter option would turn off to Whitchurch while the rest carried on with Ray to Market Drayton.

Ray led us out at a relaxed pace passed Bolesworth Castle and up to Brown Knowl before dropping down to Bickerton and on to Cholmondely.  At Wrenbury we dashed across the canal bridge just before the bridge was raised for a passing narrow boat: this was in marked contrast to our previous visit when Brian’s canal experience was called upon by Dutch navigators.  A mile further on we stopped in Aston to regroup where, with Ray’s directions in mind, four of us headed off for Marbury and Whitchurch.

The White Bear in Whitchurch did us proud for lunch assisted in part by a pint of Cock a Hoop and animated conversation.  The return journey via Malpas, Tilston and Tattenhall was made in good time so that by 15.45 we were back at the Ice Cream Farm savouring a cream tea special.  Once relaxed Dave H had a proposal to put to us: with dark nights drawing in why don’t we meet half an hour earlier in the morning?  Aware that only a few members were present it was decided that a change of more than 15 minutes could not be justified.  It was therefore agreed that from the 1st October the meet/start time would be brought forward by 15 minutes and the views of the other members would be sought before further changes were made.
Distance from Chester and back, an enjoyable 57 miles.

I can understand the reluctance to start every 8 weeks from Ness Gardens as, at first sight, the Wirral Peninsula seems to have limited cycling options away from main roads and suburbia.  However today five of us explored places popular in Victorian times with a circuit including dry marshland, The Wirral Way, past people's back gardens, across sand dunes, along promenades, docks and through the oldest Public Park in the world; and with a glorious 22 C sunny day to boot.  We traversed the only Coal Mines in Cheshire (did you even know they existed?) at Little Neston, rode through the former principal port to Ireland (Parkgate), past The Titanic owners house at Thurstaston, all the way round the coast to the site of the former New Brighton Tower that was 49 feet higher than Blackpool.  Excellent pint and scoff at Seacombe Ferry Hotel - remember from 1200 to 1500 for the future.  Then down past Birkenhead Docks and through the Park, Oxton and Poulton to the Victorian playground at Raby Mere, before the final 4 miles back to Ness.  In fact the whole day was one long series of glories past, a bit like the riders, with 41 miles back to Ness.

Posted by Gudfadirin at 22:29 No comments:

The good news was the rain forecast never wet us, it followed us all day. The bad news was the 18 mph wind never let up. Bryan is still out of action but kindly turned up at Bellis in Holt for elevenses and to suggest a route and wave us off. Thank you. Off directly into the South Westerly via Cross Lanes, Ruabon and the old iron/coal fields of the Dee Valley to the Canal Basin at Trevor. Excellent lunch at The Telford pub, including a dessert called ............. "Rumpy Pumpy". That's what I asked for and got.
Photograph by Brian MacDonald 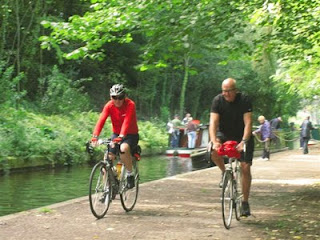 After lunch it was over the "8th Wonder of Wales", now a World Heritage Site, Thomas Telford's Pontcysyllte breath-taking Aqueduct. We discovered that, in high cross winds, cycling on it is inadvisable, due to the canal on one side and the 116 foot drop on t'other. Back along the Llangollen Canal towpath for 3 miles, we passed three more of Telford's viaducts before emerging from a canal tunnel in sunny Chirk. Then with the wind behind us, we returned to Holt via St Martins and Overton, completing an easy & very varied 38 miles.
Next week, it's another 38 mile historical ride from Ness Gardens, to see where the Victorians went to play.
BMac
Posted by Gudfadirin at 21:56 1 comment:

Jim and Brian cycled across from Waverton and met up with Mike in Rose Farm cafe. Two folks wanted to get back early for domestic duties; we haven't quite trained our families into leaving Thursdays sacrosanct for cycling. We had maps; weather was good, so we set off North by NW or was it South by SW towards Tarporley.
On the 13 August ride Brian had been compared to Contador for his sprints, but this time he led off directly into the wind to shield the others, just like George Hincape leading out Cavendish. Next month you WILL see him on the Tour of Britain. That's Brian as a marshal, not Cavendish. Work done, Brian peeled off to let the others ride off into the sun …..
BMac

….. past the Shady Oak, round Beeston Castle and down into Tattenhall. Then we crossed the A41 to Clutton and Tilston. Just south of Tilston we had noticed a feature on the map called Overton Scar and with memories of such features in the Dales being very scenic we set off south. What a disappointment; it turned out to be a low tree lined bank - I suppose the nearest you get to a scar in this part of the world. By now it was almost lunchtime and the Old Fire Station in Malpas was beckoning. All roads to Malpas are up so we were ready for a cuppa and a breather when we got there.
This was as far as we were going south, so after lunch we went through No Mans Heath, back across the A41, and skirting Bickerton Hill and Bolesworth Castle we were back in Tattenhall.
Resisting the temptations of the Ice Cream Farm, we took the lane to Hargrave and found ourselves really close to Walk Mill. As Jim hadn’t been before and we had a small amount of time left, we called in for a coffee and a piece of non fattening chocolate cake. At this point we separated and arrived home pretty much on time.
Around 40 miles and a pleasant sunny day.
JD
Posted by Gudfadirin at 17:29 No comments: