A couple of thank you: first to all those who gave me their £5 Xmas Lunch deposit, bringing the total number of diners to eighteen.  Secondly to Jim who led today’s ride back in March, but in the opposite direction.  As the pub then was such an excellent choice, it just had to be revisited: more of that later.  I simply copied most of his route onto a very high-tech page from a 3”: 1 mile road atlas.
It was good to see both Mike M & Dave M at the cafe, even if it was only for coffee.  A new rider from Utkinton “Tish” also joined us for the first 10 miles to Malpas, where she had to turn off; after having read the CER Blogs over recent weeks, she decided to give us a try.  Hopefully we’ll see her again.
George (finally recovered from his SECOND End2End ride), Lizzie, Paul, Ray, Roy, Dave R, Steve and I set off on what promised to be a warm & sunny autumnal day in an anti-clockwise direction through Clutton, Malpas and The two Wyches.  These two villages are said to be named after medieval “wych-elms”, while their larger Roman neighbour “Whitchurch” had a white stone church.  Lunch at The Black Bear, Church Street (01948 663800) opposite the big parish church, again lived up to expectations. On the plus side, drinks and food were both served quickly but a minus point was given to the all-time rip-off £3 for a lime and soda.  £3 was much better spent on a pint of Shroppie Gold, which really was the VERY best pint all year. 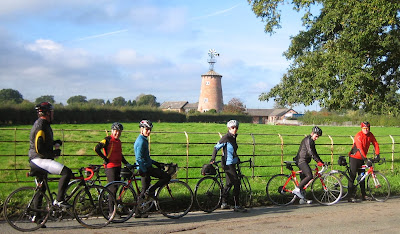 Shortly after re-starting, we passed the town cemetery that displayed a plaque for “The Commonwealth War Graves Commission”.  I thought that these peaceful places only existed where battles had raged, but here were buried WWll airmen who had died at a Polish hospital to the west of the town.  Continuing NE through Wrenbury, we paused & posed for a photo-stop in front of an unusual mill at Acton.  After 16 miles we adjourned for afternoon tea & cake for the princely sum of 80p at the Metropolitan Knitting Centre Café at Aston-juxta-Mondrum.  Continuing NW through Wettenhall and Eaton, we dropped Lizzie back at Utkinton after 46 miles, George and I stopped at Duddon, while the rest continued to Chester.  All in all, the usual high standard CER day, with sun, gentle wind, good company, fine food and excellent beer.  What more could you ask for?
BM

Posted by Gudfadirin at 20:45 No comments: 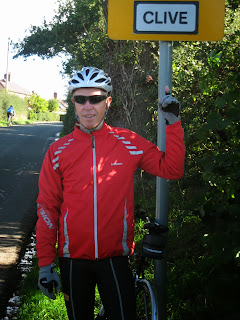 The weather was perfect; bright skies, lots of sunshine and a northerly headwind - an autumn day to relish riding down, for most riders, new country lanes - what's not to like about this ride! So a cyclist's dozen of bikes with 12 riders (Liz, Martin, Liz & Dave, Petar, Steve, Dave M, Bryan, Brian, Ray, Andy and I) congregated at the Sleap Airfield café overlooking runway 05-23. Bacon sandwiches and coffee set us up for a 47 miler calling at Shrewsbury for lunch at the Coach and Horses on Swan Hill.

There were so many small villages and hamlets on this ride that I have chosen not to name them all including the blogger's eponymously named village that we cycled through, but the photo tells all. On an easterly loop out, I manage not to disappoint the group in finding a tiny lane to Stanton upon Hine Heath; it was metalled once about 25 years ago! The countryside is open and rolling with high-hedged lanes protecting us from the wind. Turning south to Ellerdine Heath, I deviate from the planned route to ensure we end up in Shrewsbury on time. We wiggle our way to Upton Magna and here, at the confluence of NCR 81 and 45, we take the 81 right into the town centre. My bike nav is playing up, but luckily Andy has been this way before so at Uffington he correctly accesses the former railway line towards the banks of the River Severn. We cycle right on along the river bank for nearly a mile exiting right by Swan Hill. 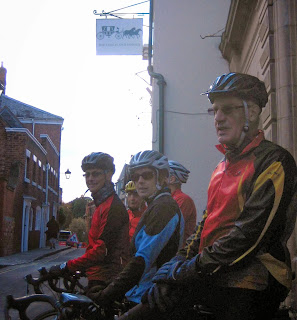 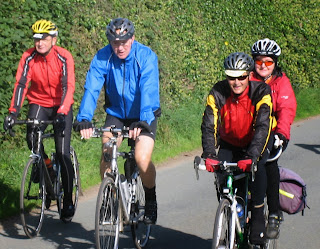 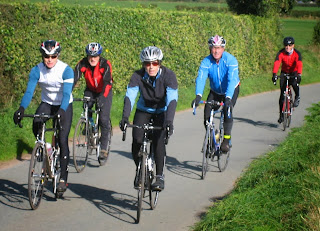 The Coach and Horses pub was chosen on the advice of Brian's mate, who is a Shrewsbury pub aficionado. He wasn't wrong; a group table was laid up for us whilst we park our bikes behind an office block. There is a good choice of ale and food, and soon seated, the food arrives promptly. Back down Swan Hill, we continue a leisurely cycle along the river bank before walking across the bridge to begin our Shrewsbury exit route. There next follows quite a lot of thankfully quiet main road, although it is still the NCR81. At Montfort Bridge, we get back onto country roads bound for Baschurch. From here, the looping lane to Myddle sets us up for returning to Sleap café. The chocolate cake is demolished and Christmas Lunch deposits expertly extracted by Brian. A perfect ride to finish off the "summer" season.
See route map and/or gpx file download.
CA

The weather forecast was dreadful, and the thought of being drenched in the hills above Chirk did not appeal. So given that there was a fine weather window locally, a modified Roodee ride was cobbled together this morning at 07:30. The idea was to meet at the Roodee but cycle out to the end of the Greenway to sample the new café at Meadow Lea Farm before then riding in a loop not too far from home, just in case the deluge came earlier than expected. The café is in a brand new building and the fare was good - perhaps an alternative start point for Roodee or Manley rides? So Dave H, Dave R, Steve, Ivan, Andy and I set off bound for Delamere station café for lunch. Liz and Martin were back from their high altitude training in Bolivia and Peru, but were only out for coffee today.
It was not an obvious route out in that we went north to Cheshire Oaks Cycles then down the aptly named Oil Sites Road to Ince and Elton. "Are we going over the marshes" - "No, we're going to Manley!" So over the motorway we go, then up onto the Avanley Road past Manley School and onto to the Delamere forest road. At the junction at Hatchmere, I turn left to cries of "the cafe is the other way". All in good time! We now ride down two idyllic lanes (except for White Van Man!) towards Crowton, then back round the loop through Norley to Hatchmere again and, this time, turn left to the Delamere Station cafe arriving around 13:00 with 25 miles completed.
Anxious not to push our weather luck, we leave before 14:00 bound for Kelsall via Eddisbury Hill. In Kelsall, Steve drops off to go home, while I notice that Dave H is missing. Apparently, he wanted to make his own way back to Mickle Trafford where his car was parked. We now head for Mickle Trafford via Oscroft (where Dave R heads for Waverton) and then Barrow. There was a little rain in the air now, but as Andy, Ivan and I enter Mickle Trafford on the A56, the heavens open and the promised heavy rain has now arrived. Andy presses on to take the Greenway whilst Ivan offers to run me home from his house where we are now bound. He was locked out (don't ask), apologies profusely, but there was nothing for it for me now to press on in the rain while Ivan headed for the Royal Oak to keep warm and out of the rain. The route was 39 miles and as I arrived home early at 15:00, I decided to wash the bike there and then - the first time in what seems months.
See route map and/or gpx file download.
CA

PS: Please ensure you have registered for the Shrewsbury Special Ride next week.

Posted by Gudfadirin at 20:56 No comments: