A large number gathered at Rose Farm and it was obvious that we would need to split into two groups. The ‘moderates’ had at least two routes to choose from, but the ‘briskers’ – comprising of John, Tom, Ray, Steve T. and Ken – did not have a route as, neither Clive nor Ivan, the usual leaders, had turned up due to other commitments. John consulted his Garmin and offered a 70km ride to Audlem. So, 10 minutes after the moderates had left, we set off, only to find the moderates waiting at the entrance to Rose Farm where Dave P had lost his helmet!
We went along Utkinton Lane and down through Cotebrook, passing the ‘Knickerbrook’ entrance to Oulton Park race circuit. Then on through Rushton and Wettenhall, with John setting a good pace and navigating with great confidence. All went well until we reached Reaseheath College, where ‘Garmin’ was telling John to take the road through the college grounds. Dave Heath later told me that this was possible, but we were not confident, so continued down Wettenhall Road, across the A51 and into Nantwich via Welshman’s Lane and Welsh Row. We threaded our way through the centre of Nantwich with John following the satnav’s instructions – whereupon we found ourselves at the other side of Reaseheath College - the clever thing had re-routed to take us back to where we had departed!
After a good 10 minutes consulting various Garmins and Google Maps, we deduced that we needed to be on the other side of Nantwich, heading out on the A529/A530. So, completing a circuit around the town we picked up the A529 and then A530 and then headed off towards Audlem down Coole Lane. Half way along, we came across the signpost to the ‘Secret Bunker’. Built in 1950 the 35,000 square foot underground bunker would have been the centre of Regional Government had nuclear war broken out. It was declassified only in 1990. 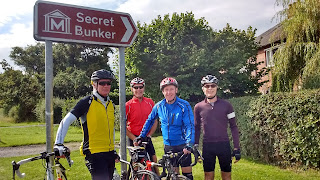 We arrived in Audlem at about 12.30 and decided to see if there was room at The Old Priest House café. Squeezing the five of us onto a table for four, we ordered our food and admired the many cycling photos, including one of ‘Harry the Bike’ as he marked his 500,000 miles in the Guiness Book of Records. Apparently he averaged 280 miles to the pint! 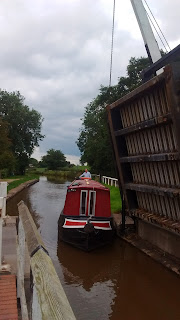 Although a little slow to arrive, the meals were excellent and enormous, especially John’s ‘Mega-breakfast’. Suitably restored we set out for home, retracing our route from Audlem back to Coole Lane.  About one-third of the way along, we turned left towards Broomhall Green and Sound, crossing the A530 there. Thence on to Wrenbury, where we had to stop, as the bridge over the Shropshire Union Canal near the Dusty Miller pub had been raised to allow a barge through. This allowed us a short breather, as John had been setting a furious pace, fuelled no doubt by his ‘mega-breakfast’. This continued as we zoomed through Bickerton and across the A49 at The Cholmondeley Arms, heading past Cholmondeley Castle Gardens to Bickerton and then over Harthill to Tattenhall. John was still flying, fuelled by a desire to catch up with and berate the driver of a Land Rover and trailer combo that had nearly taken him off. Luckily for the driver, the chase was in vain.
Reaching Hoofield, John, Tom and Ray peeled off to head back to Chester leaving Ken and Steve to wend their way along the aptly-named Corkscrew Lane back to Rose Farm, arriving just in time to  enjoy a cup of tea and a slice of cake.
A total of 50 miles/80 km at an average speed of 16.4 mph, this was a definitely a proper ‘brisk’ ride.
See route map and/or gpx file download.
ST

Posted by Gudfadirin at 20:08 No comments:

Despite earlier warnings of the tail end of the Hurricane reaching Cheshire by Thursday morning, a fair sized group of easy Riders assembled at the welcoming Rose Farm café at 10:00. The moderate group, consisting of Bryan, Andy, Mike G, Steve H, Dave H, Trevor and Jim decided to head for the Red Lion at Goostrey. Dave and Liz arrived just as the group were setting off and decided to follow on when ready. We followed a well-recognised route past Oulton Park and Little Budworth down to Whitegate and crossed the Weaver by the locks. The rough track up to Moulton is still as rough as ever but we rode it valiantly and then sped down through Davenham, Lach Dennis and Lower Peover. We made good progress, helped by a slight tail wind and what seemed to be a generally downhill route. (Perhaps the training is beginning to pay off!)
Arriving in Goostrey there was no sign of the pub, but fortunately a passing local knew the area well, so we were practically the first customers in at 12.15. The local beer, Hancocks, a new one to most of us, was well recommended by Bryan and Steve, and we had just ordered our meals when Dave and Liz arrived.
The return journey took us south towards Holmes Chapel, where we followed a lane of slightly dubious quality across the River Dane and up into the village. A short spell of main road followed until we took the lane south of Sproston Green and to the south of Middlewich. This is sometimes used as a short cut for drivers also wanting to miss the town centre, as we witnessed when one nearly flattened the tandem with his impatience.
Following another short section of main road near Wimboldsley, it was with some relief that we reached the turning for Church Minshull, and the quieter lanes up through Wettenhall and Oulton Mill. At this point the lure of afternoon cake was too much for the two Daves and together with Bryan, Steve, Mike and Liz they took off for the café at the Shire Horse Centre, leaving Andy, Trevor and Myself to head straight back to Rose Farm.
Despite a slight occasional headwind on the return, a very pleasant 45 miles, or just short of 70 for those from Chester.
See route map and/or gpx file download.
JD

Posted by Gudfadirin at 18:00 No comments: 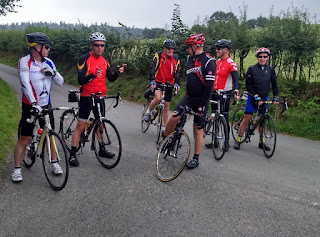 An Indian Summer’s day had riders galore at The Gallery, but Jim and Martin only came for coffee.  Steve had re-cycled a 2012 route and decided to lead a ride to “the 2012 pub find of the year” at Cwm near Dyserth. Bryan started with us to Halkyn, but the hills got to him and he pealed off, leaving Steve, John, Clive, Paul, Tom and myself on a fast ride. 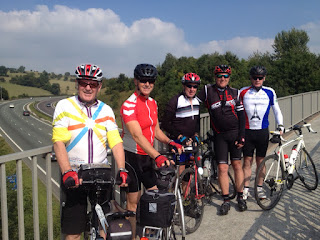 After passing through Babell and past the monastery, Steve announced that the pub only served food from 13:00, so an extra 10 miles were added near Trelogan.  With perfect timing, we rolled up at 13:05.  The jury in my opinion are still out on The Blue Lion, Cwm LL18 5SG tel: 01745 289229. I didn’t think it was that special and Trip Advisor reviews have 44 Excellent but 9 as “Terrible”, so you decide. 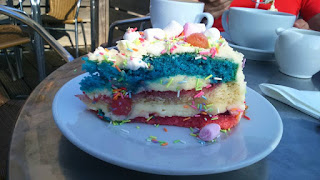 The return up over the steep climb that crosses the A55, saw just Steve and Brian going for afternoon tea after a sunny fast CER ride with 3,800 feet of ascent and 48 miles round trip back to the Hawarden Estate Garden Centre for coffee and obscene-coloured cake.  If ever The Gallery is closed, this place on the old main road east of the town is very pleasant with plenty of parking
See route map and/or gpx file download.
BMac 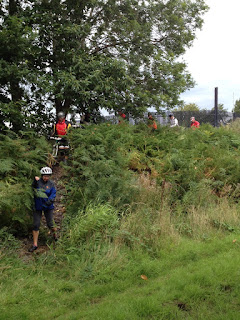 Posted by Gudfadirin at 20:18 No comments: