Having seen the day’s weather forecast for snow and rain over Llangollen way, I hastily cobbled together a replacement 45 miler from Hildegard’s café to the standby lunch venue of the Old Jack at Calverhall. The two Pauls, Brian, Stephen and myself would be the cabal today. The Donaldsons were only taking coffee with us and then off "house rental" hunting having just “bought” a new house (i.e. the plot thereof) in Parkgate. So off we go hoping it won’t rain today; and soon we see the rain clouds over the hills to the west as we ride Shocklach bound, turning off at The Purser to cut down to Threapwood.
There is evidence of a lot of water in the fields and roads after the overnight downpours. We take the oddly named “The Ln” out towards Whitewell, and then on to Fenn Bank to locate the NC45. The lanes are muddier now, helped along by tractors coming off fields and the overnight deluge. At Prees, we climb out under the A49 and over the A41 and then the long lane to Calverhall village.
The pub’s is open and we are soon organising our own table under an enormous stag’s head. Disappointingly, my pint of Stonehouse bitter is truly “off” and is promptly replaced with Shropshire Gold. The luncheon fare comes promptly, and as ever, it is plentiful and of good quality. As we start to leave, the rain arrives and it feels colder. The return ride is straightforward i.e. through Whitchurch, Malpas and Tilston. However as we enter Whitchurch, Brian has a front wheel puncture on his new tyres (last week it was the rear wheel). It had to happen to one of us given the amount of hedge cutting we have seen today. Soon along the Malpas road, we take a left down to Higher Wych to get off the main drag to Malpas. Thankfully, the rest of the ride is uneventful, and the rain thankfully stops. We all take a hot drink at Hildegard’s and, around 16:00, go our separate ways home where I notice it is 3ºC! For me this is the last ride of 2013, and as ever the mix of good company and the Cheshire countryside is an unbeatable combination even in the dark and cold days of winter.
See route map and/or gpx file download.
CA

For a murky mid-December day there were a surprising number of riders at Rose Farm. I had prepared a ride to the "Coach and Horses" at Bradfield Green, but a call the evening before found that the pub was closed for refurbishment. So a hastily re-hashed route was loaded up on my iPhone. The tandem two are just arriving as we are leaving but nevertheless plan to meet us in Winsford for lunch. We i.e. Ray, Petar, Stephen, Paul W, Brian, Dave H and Bryan set out on a northerly sweep to Delamere via the top lane at 500+ft past Summertrees. Then swooping down past the Yeld, we end up racing through Delamere to Hatchmere crossroads. Here Dave H and Bryan cut the corner to access the start of the Whitegates Way down at Waste Lane at Cuddington. We however turn left and right up Forest Lane for the downhill run to Crowton. Turning back towards Norley Bank, we take the tiny Sandhole lane to skirt around the steep climb up Norley Bank. The road surface deteriorates until we can ride no more due to a fallen tree preventing any circumnavigation. 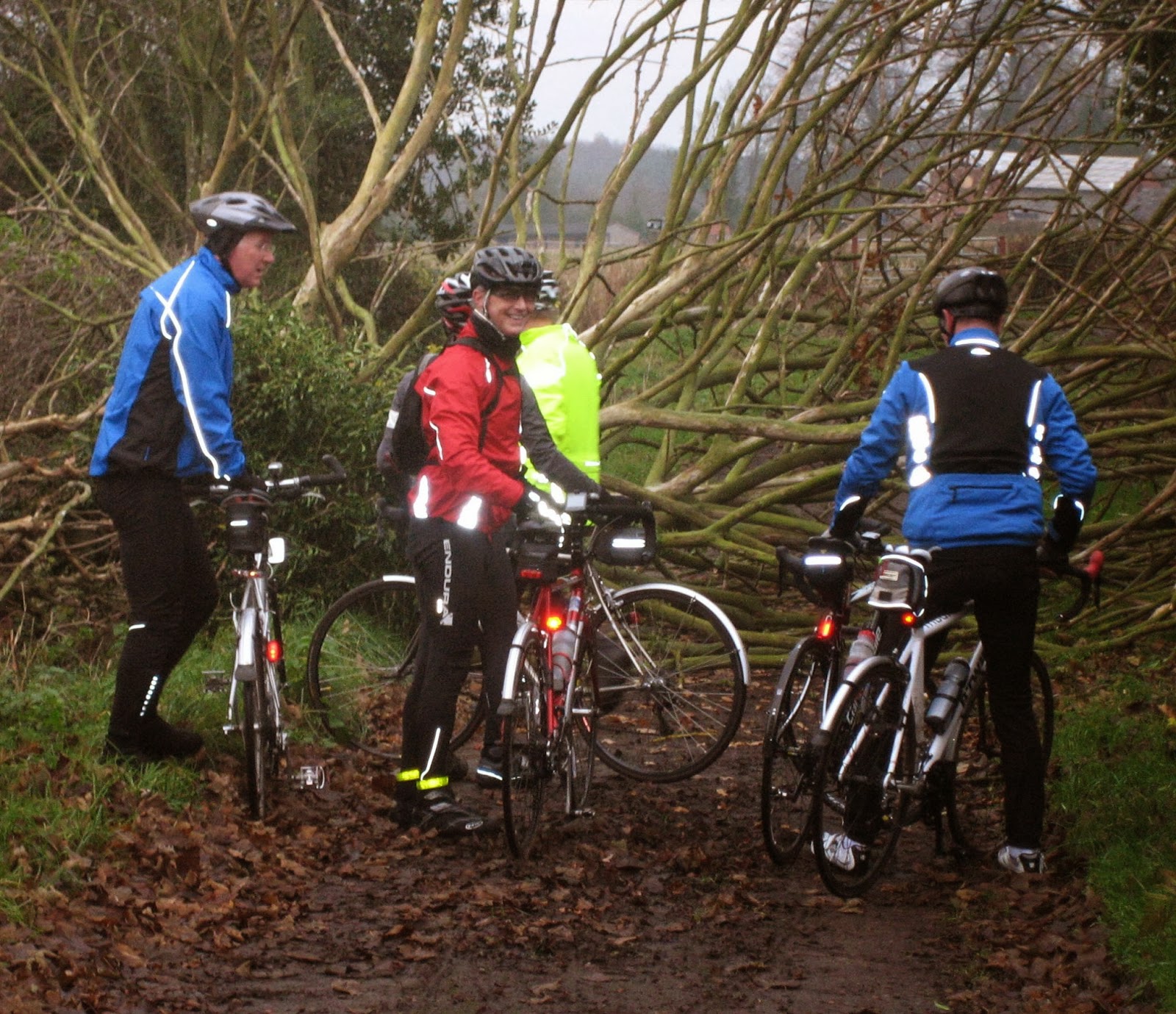 So back we go, and steadily grind up Norley Bank. Here it is just a matter of turning left and right around the diving lanes to access Waste Lane and the long flat run to the exit into Grange Lane and onwards to Wetherspoons. We have 21 of the 41 miles now completed. The Tandem Two arrive just after we have eaten and are making their own way back to Rose Farm. So after a very rapid repast, we all set off for Darnhall, but confusion soon sets in when a schools-worth of juniors are crossing the road with a police escort. Ray, Stephen and Petar having been caught up in it, don’t realise that all of us have turned right. A phone call later sets them on the correct course. Meanwhile Bryan and Dave H are making their way back to Rose Farm by the obvious direct route. At the Church Minshull turn just off the Winsford to Nantwich road, Ray, who is now by the "Boot and Slipper", calls to see where We Three are. After a long phone discussion, Petar and Stephen decide to call it a day and go the direct route back, whilst Ray continues on left to meet We Three. So We Four now take the B5074 south for lanes anew. Turning right into Aston-juxta-Mondrum, we head for Barbridge along nice straight and dry new lanes. Here we motor north up the A51 turning off on the back lanes of Calveley bound for Eaton. We grind up the last hill to walk across the A49 and back to Rose Farm. We arrive back at 15:20 with 42 miles ridden, despite several delays due to phone calls and two re-inflations of Brian’s rear tyre! Paul heads for his car, as We Three ride back towards Chester. Brian peels off towards Duddon, and Ray and I head for home. It’s just 16:15 as I get home with 70 miles to bank, and surprisingly no rain in evidence.
See route map and/or gpx file download.
CA 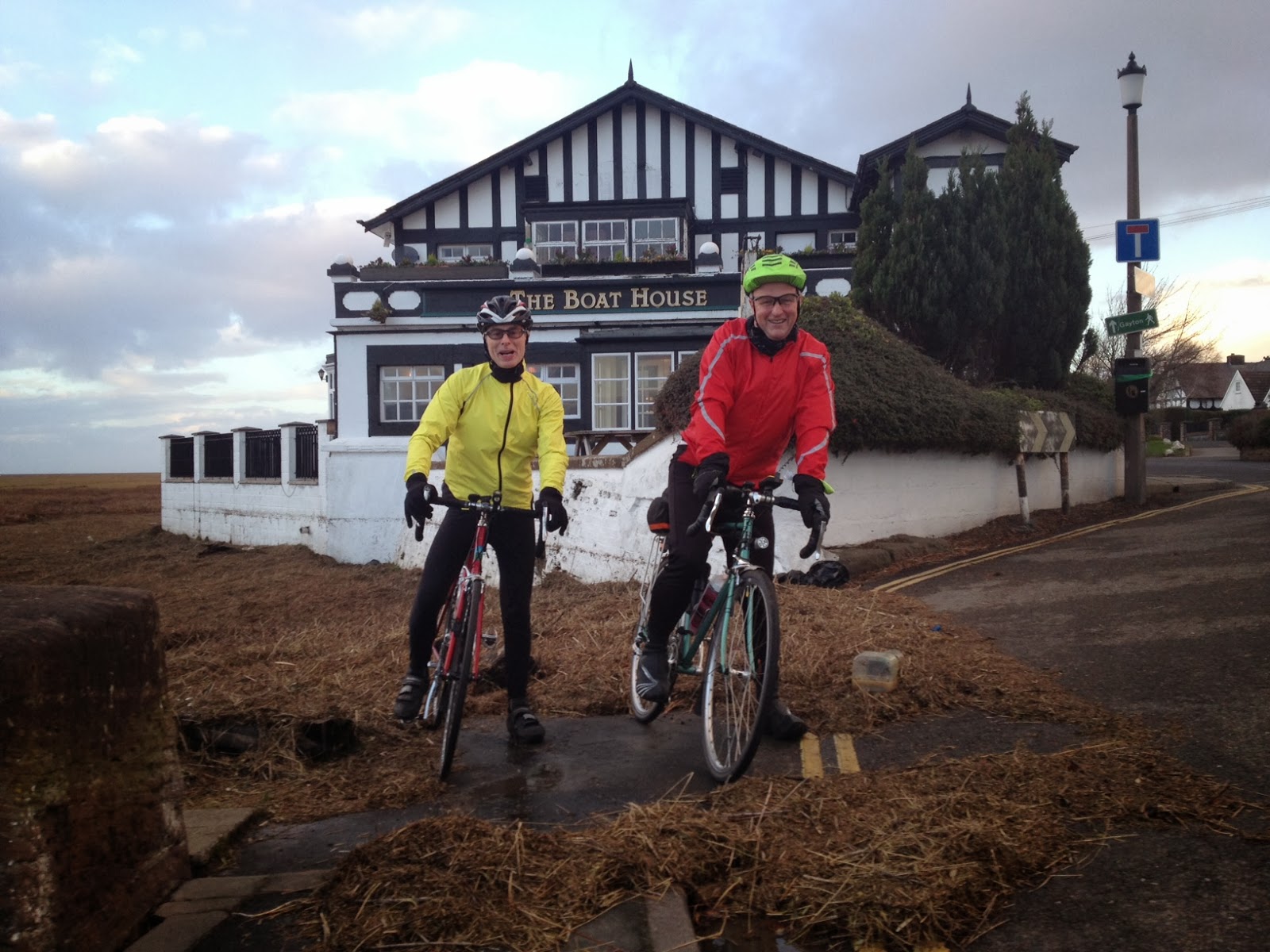 The CER annual ride to the Christmas lunch was due to start from The Gallery at Hawarden, but the predicted 65mph winds put paid to that for many members.  I was due to lead the ride today but as the winds down at Parkgate were gusting to 45mph, I thought better of it & went back to bed.  A number of riders set off from home, were blown back/over/sideways by the gusts and returned from where they came.  But the high wind and rain did not stop our two hardiest riders, Ray & Mike G from braving the elements to arrive at The Boat House, Parkgate from Hawarden looking rather bedraggled after only 12 miles: nor indeed Dave H and Roy cycling direct from Chester. All four deserve a medal. 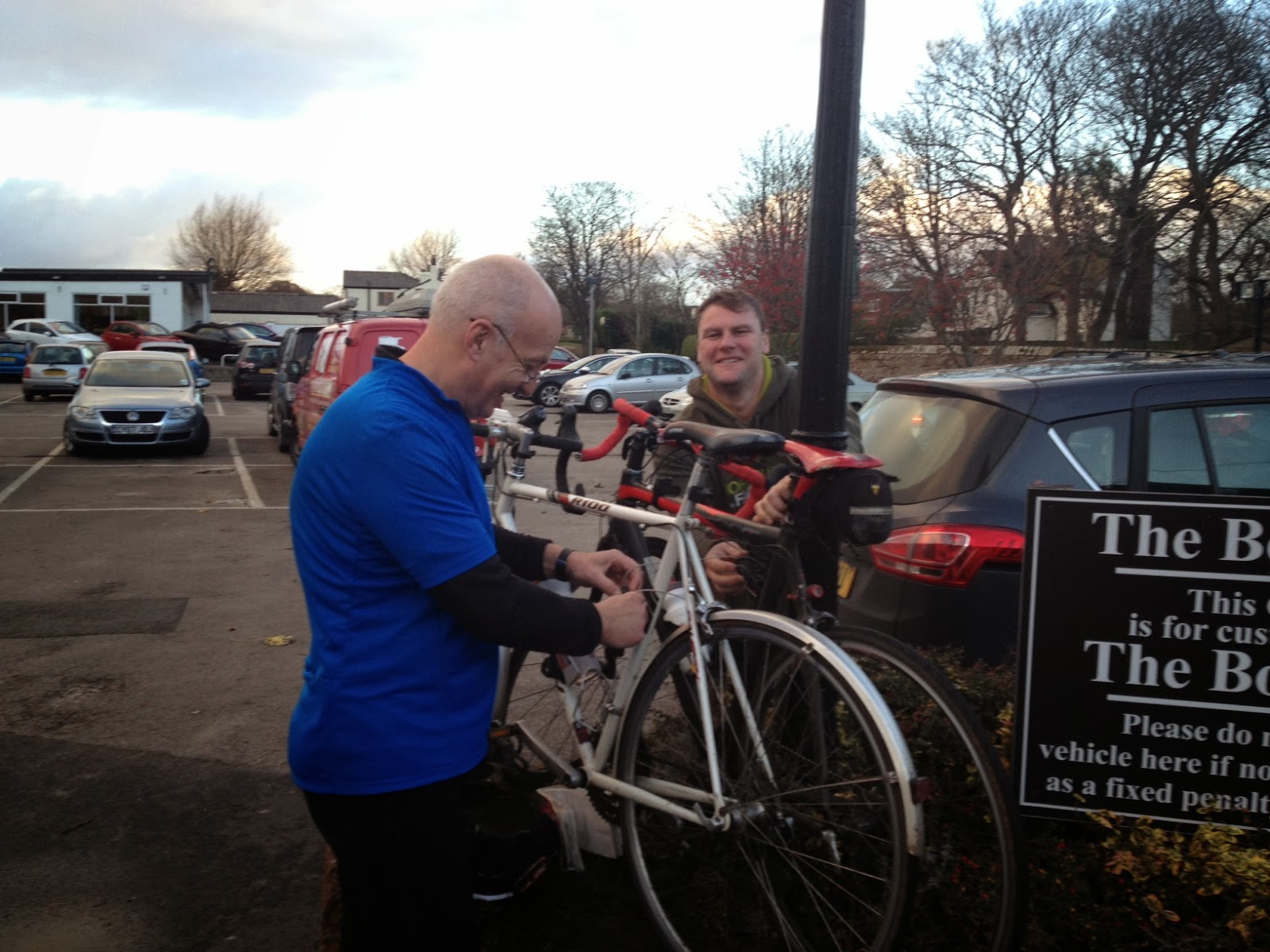 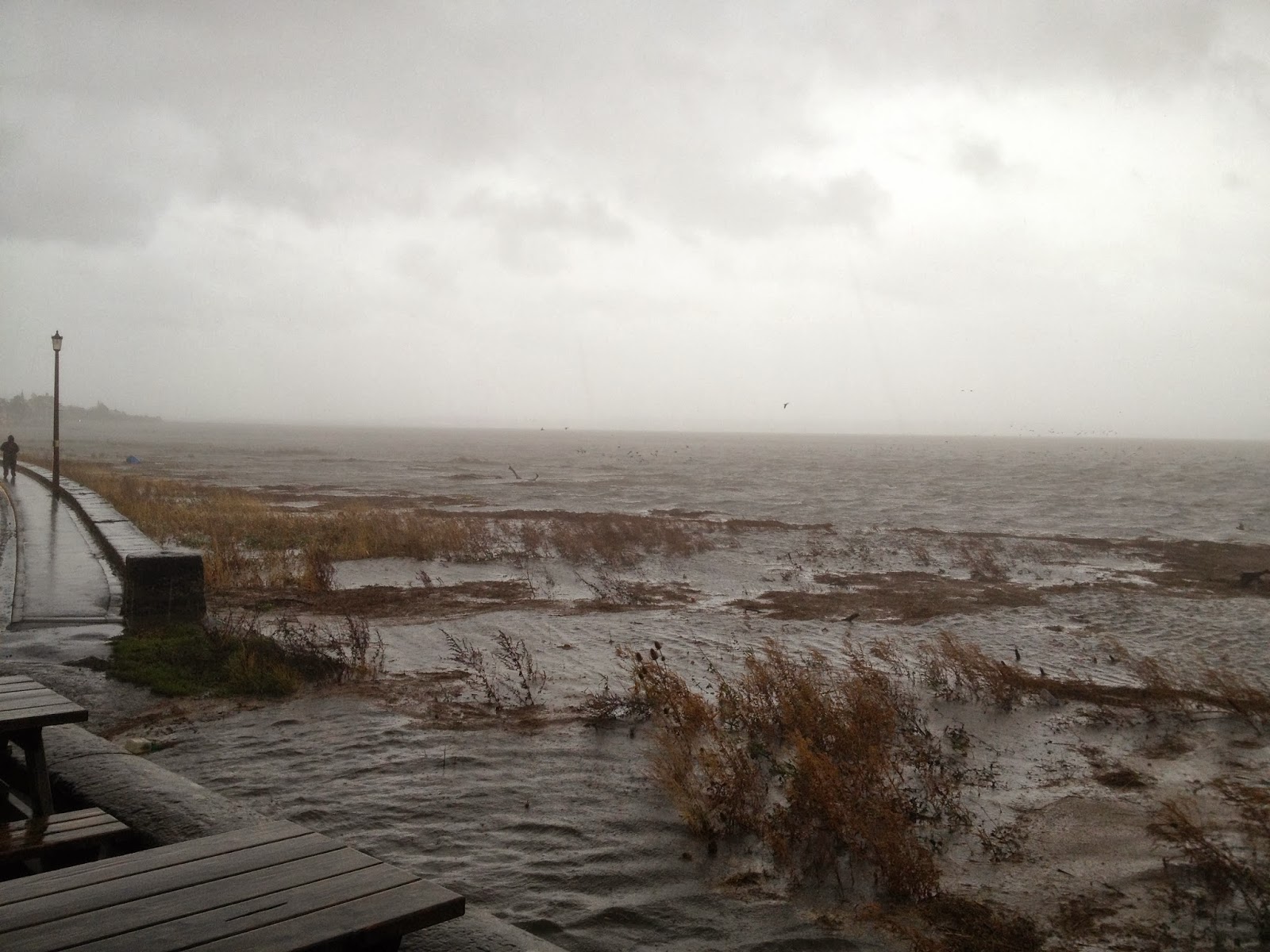 Paul W, Trevor, Steve, Roy, Ray, Mike M, Mike G, Martin, Liz P, Liz D, Jim, Dave M, Dave P, Dave H, Clive, Bryan and I met in the bar for pre-prandial drinks followed by an excellent Christmas lunch.  We also had the very, very unusual spectacle of the highest tide for some decades right outside our window; this drew visitors in to watch the residents of the marsh being eaten by the flying predators outside. You can see evidence of the storm’s devastation on Wirral coastal places that we often ride past. 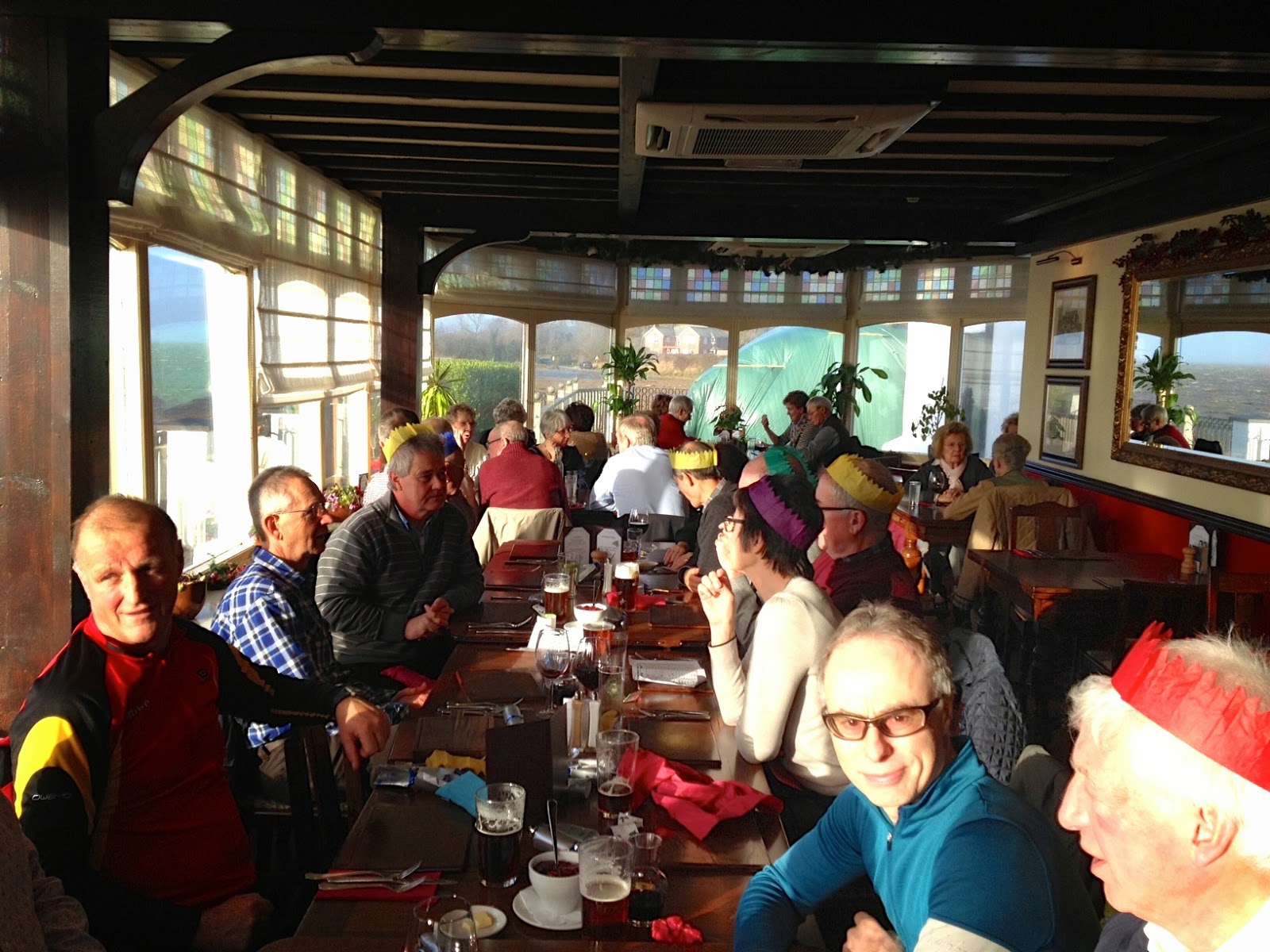 Thank you all for making the job of organising the lunch so painless, by paying your deposits and choosing your menu promptly. 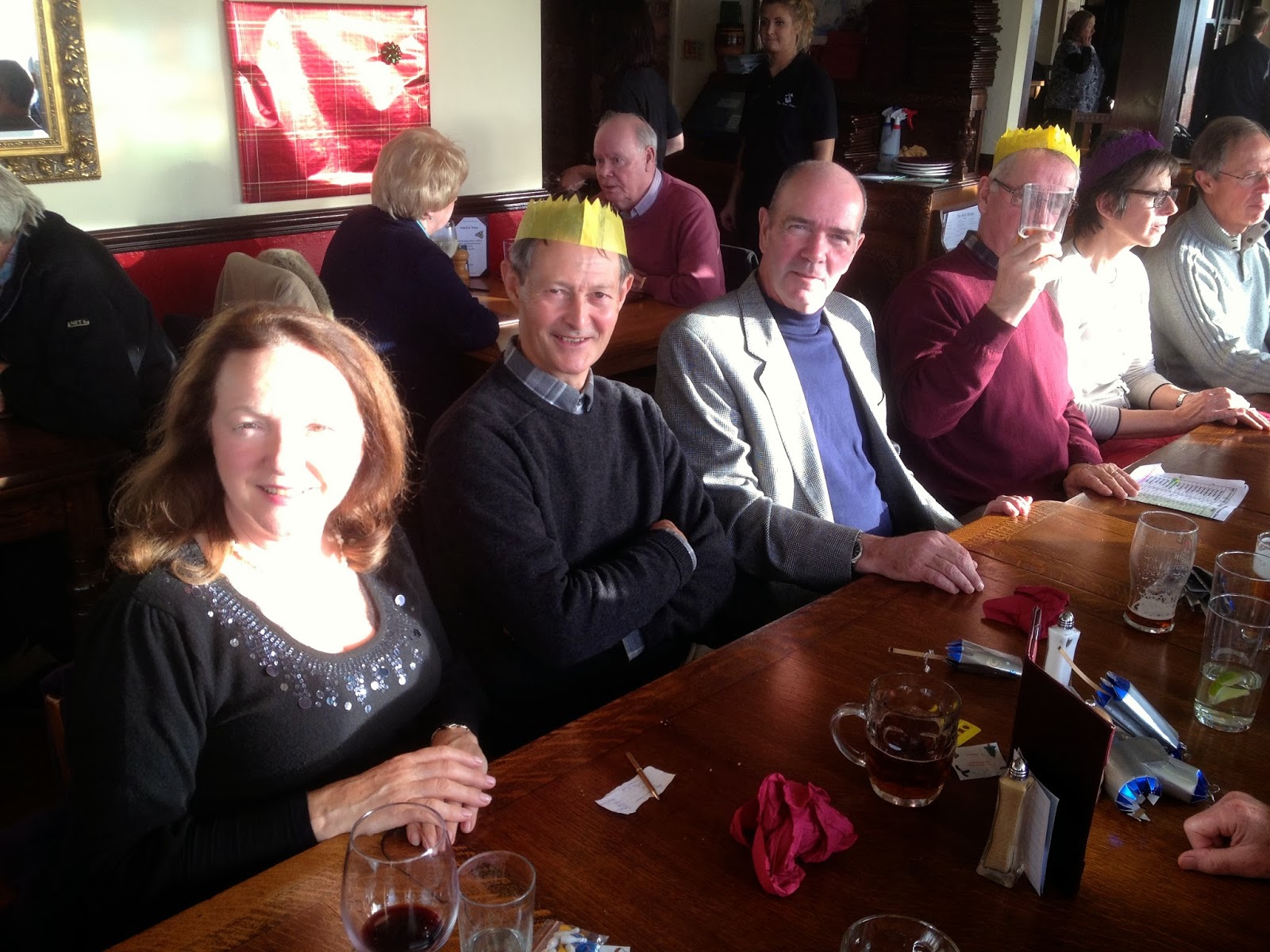 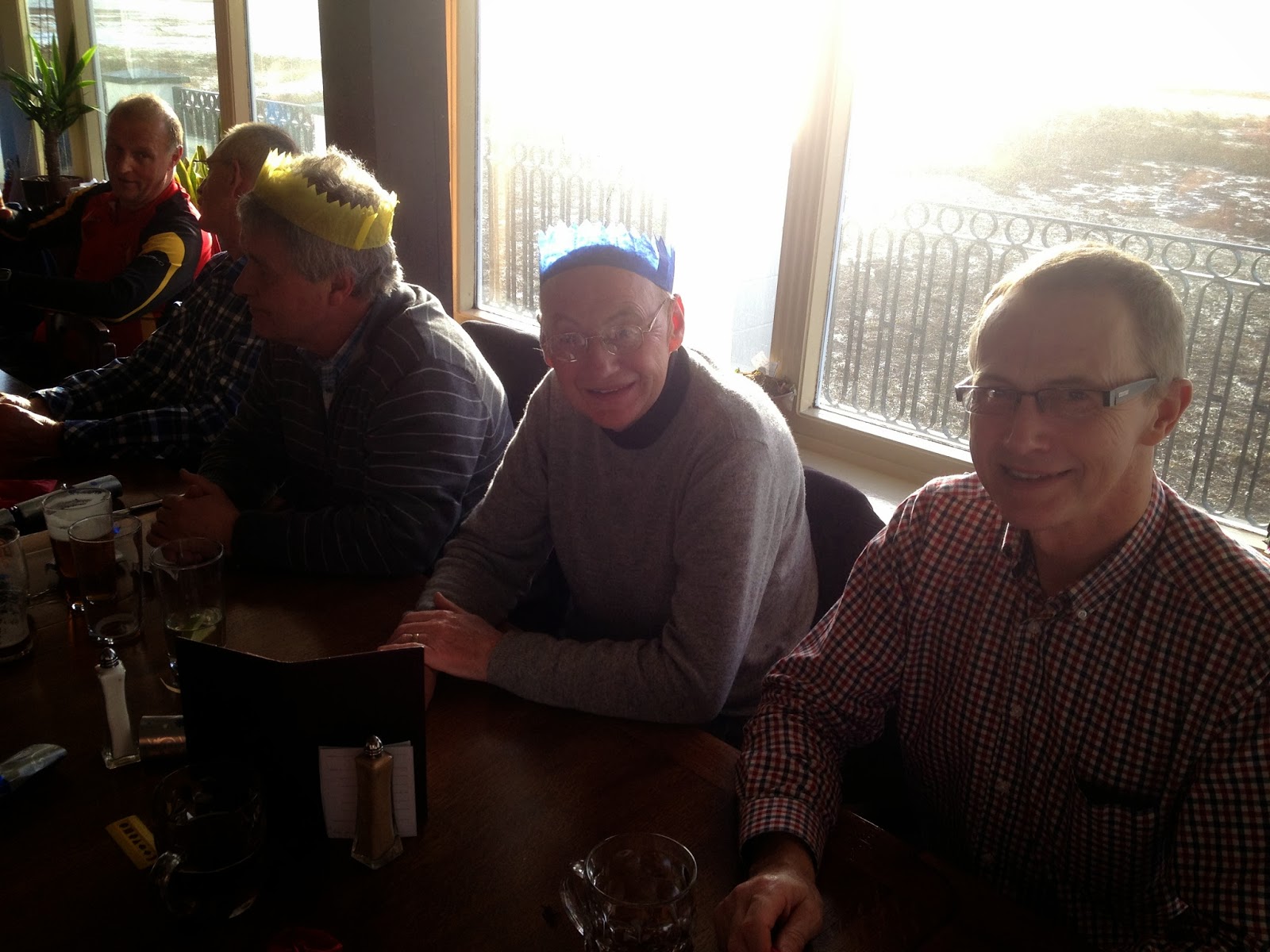 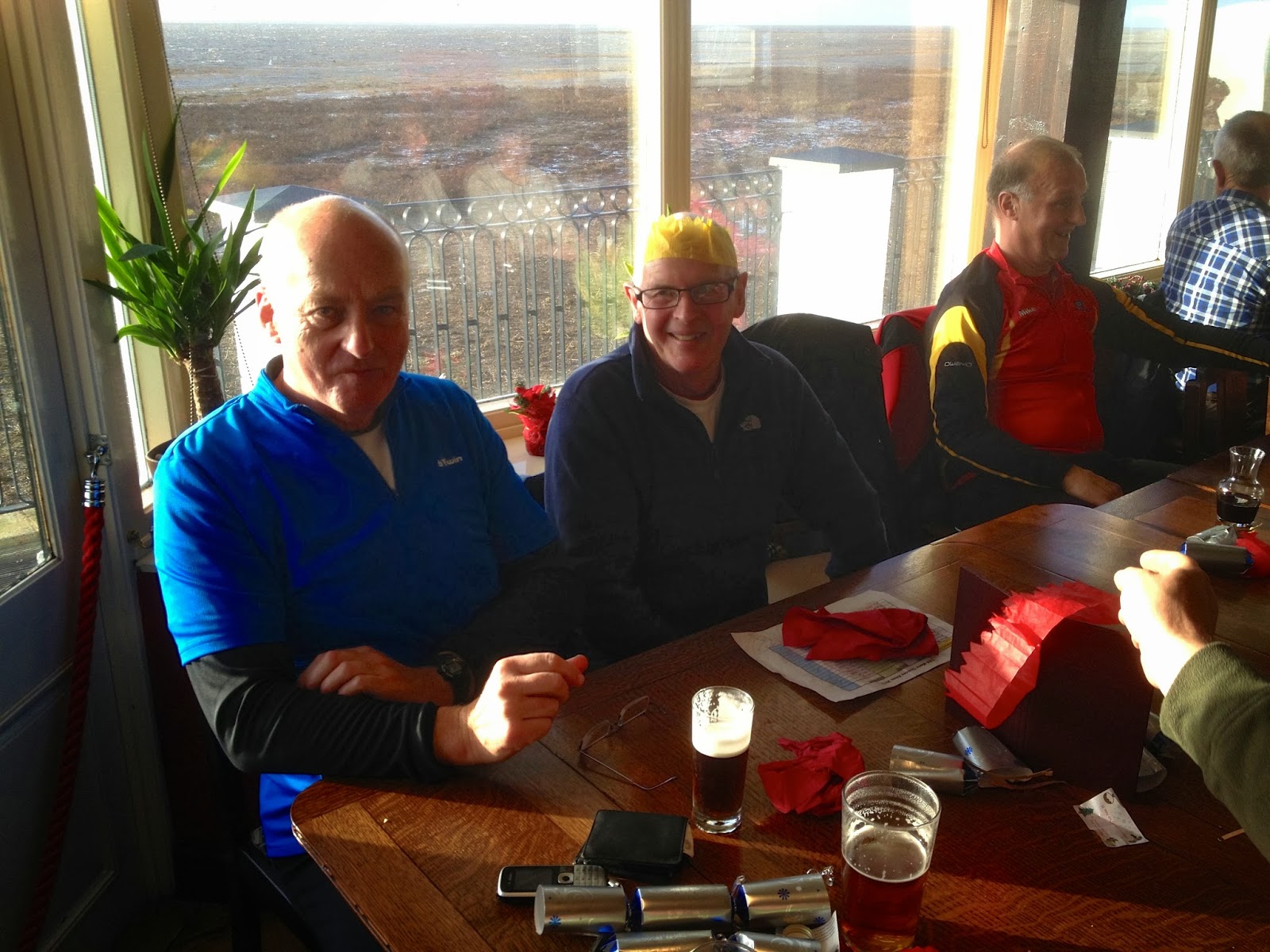 Steve Tan accompanied me by car from Runcorn. It was a mild, calm morning at Manley Mere. We were soon gathered around with Wirral Paul, Ray, Brian Mac, Steve H, Jim, Dave M, Roy and welcome warm drinks. Dave and Liz then joined us with their tandem: eleven in all.
As usual the climb up Sugar Lane had some of us breathing too hard, too early. Dutton Locks were reached via New Pale and Waterloo, down pretty Dark Lane to Kingsley and out again on Roddy Lane, taking Crewood Common Road to the path along The Weaver. At Dutton Locks I rang The George and Dragon to confirm my provisional 12:30 booking and finalise numbers for lunch. As I put my phone away Dave discovered that his tandem front tyre was soft. It was an obscure puncture, so despite Dave’s usual efficiency it was another half hour before we were winding up Friar’s Rough from The Trent and Mersey Canal, before crossing the A533 on Ash Tree Lane.  The ride so far had been slow, with the hilly initial stage followed by a river path and a puncture. Plan B was called for now, my original meandering intentions were switched to a brisk, direct push for Comberbach and lunch at Great Budworth. We were only a little late. 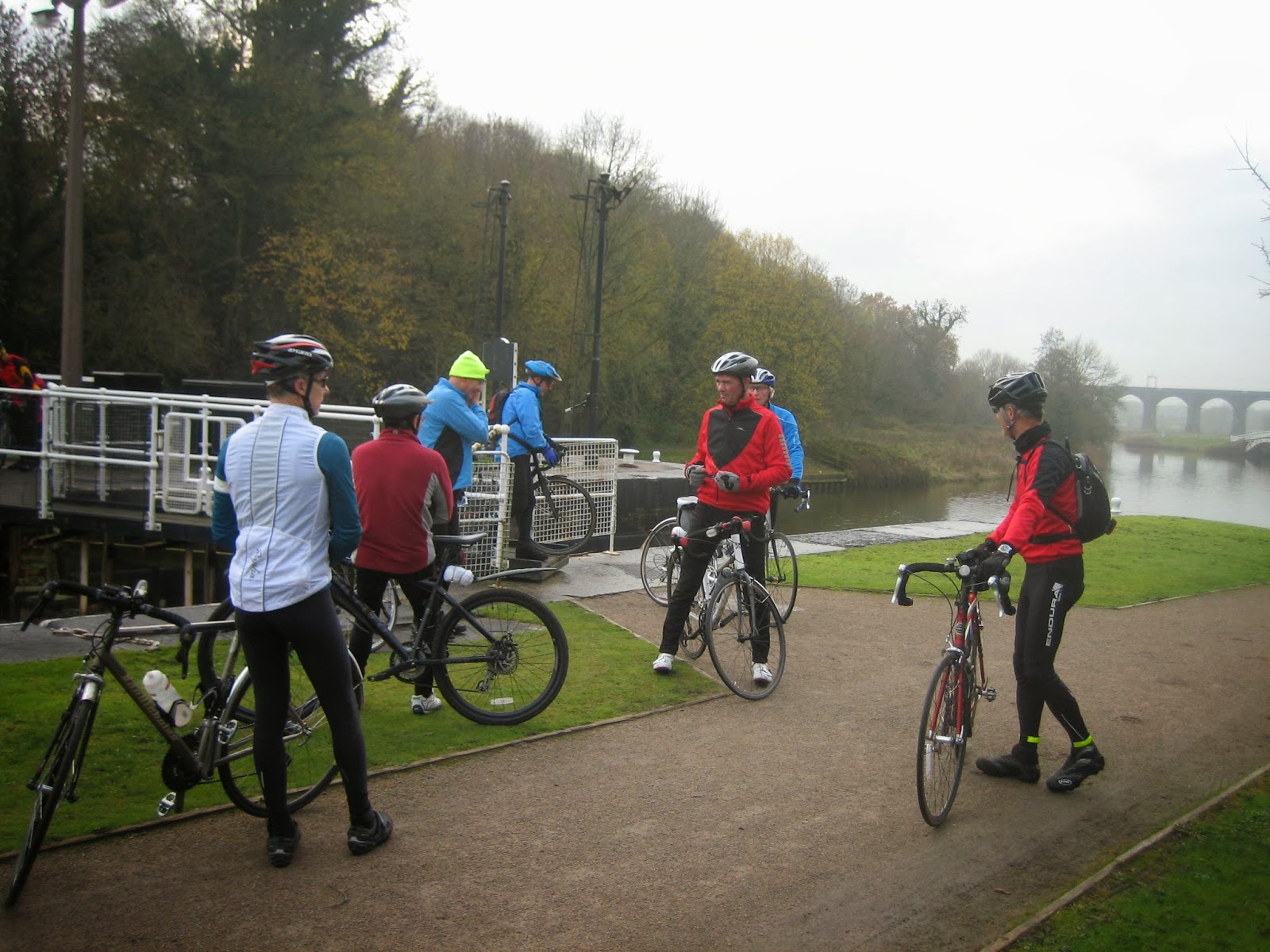 Lunch was generally enjoyed with good company and friendly service in lovely surroundings. However, some of us weren’t impressed by our pig, fat and apple slurry baguettes.
Our return was through Budworth Heath and Antrobus. On crossing the A559 we wandered south down small scenic lanes: Well Lane, Scotch Hall Lane, Barrow Lane and Hall Lane. Eventually, we reached the Weaver through Little Leigh. After climbing steeply to Acton Bridge we turned off through the attractive hamlet of Onston, and then to the Delamere switchback via Norley. The usual sting in the tail was the climb past The Goshawk, before sweeping swiftly down Manley Road. We had safely beaten the dusk with 36.6 miles completed. Short and sweet.
DH
Posted by Gudfadirin at 20:13 No comments: