With a glorious day in prospect it shouldn’t have been surprising that ten of us met up at the Expresso Café in Gwersyllt.  A good turnout, I would say, for Gwersyllt where almost every ride goes uphill.  After the usual chat we split into two groups with Brian Mac, Dave H, Dave & Liz P and I opting for the moderate 30 mile ride to Erbistock.  Get the hills in early was the plan, so off we set winding ever higher towards Southsea and Coedpoeth before descending down to Nant Mill.  Eschewing the ford we took the pedestrian bridge across the stream and then climbed up to the Bersham road for a lovely winding descent down into Bersham.  With the hills out of the way the rest of the morning was spent on the back lanes in true CER style: the Sontley’s, Gyfelia, Crabtree Green and on towards Erbistock.  Even the remains of earlier hedge trimming couldn’t spoil such a marvellous day and the most wonderful cycling weather.  It was 12 noon with 2 miles left to Erbistock when Dave punctured but with skilled help the thorn was removed and we were back on the road within 15 minutes heading for lunch.

It’s a few years since we were last at The Boat in Erbistock.  With temperatures of 17˚C this was a day for being outside and there is no finer setting than the banks of the Dee with a pint of ale and good food perfectly cooked.

All to soon it was time to leave heading for Overton Bridge and on to Bangor on Dee where we joined the A525 to Cross Lanes.  Skirting the Wrexham Industrial Estate we were soon on the outskirts of Wrexham where Brian Mac left us for Rossett while the rest of us made for the Pandy footbridge and a coffee back at the Expresso.
A wonderful day with 30 miles done.
See route map and/or gpx file download.
BW

Posted by Gudfadirin at 18:05 No comments:

Was it the first day of spring?  It certainly looked and felt like it as we five (Tony H, Ivan, Andy, Dave M and I) set off from the Expresso bound for Ellesmere.  The ride out from Chester had put 15 miles on the clock so Ivan, Tony and I were well warmed up as we set off for Wrexham and the route south that meanders around the A483.  Although the wind was against us, we made good progress down through Ruabon and onwards to Chirk.  Here I should have remembered the towpath route as we slogged up to the big roundabout.  Heading for St Martins, we soon turned off right for the lanes to Hindford and then NW towards Elson and the B road down into Ellesmere.
The Red Lion did us proud for the second time.  Dave M had decided to add a few extra miles, so he set off in a long loop back to the Expresso as the four of us re-traced our route back towards Dudleston with the wind behind us.  A few more twisty miles of lanes brought us out into Overton.  It was then a straight run on the main road to Wrexham until turning right for Bangor.  With smooth roads and a wind assist, we were spinning along at 25+.  A quick left up a short lane brought us out on the Cross Lanes road and the outskirts of Wrexham.  There is no easy way round the town so skirting around Borras, we end up walking over the A483 footbridge at Pandy.  Here Andy leaves us for the final solo mile back to the Expresso, and the three of us head for Gresford and the back lanes down to Marford.  Tony breaks off to go to Farndon, as Ivan leads a blistering pace back to Chester and I hang on to his back mudguards.  For Andy going back to the start it’s 44 miles, for us going back to Chester 70+.
See route map and/or gpx file download.
CA

Posted by Gudfadirin at 17:42 No comments:

Leaving right out of the Ice Cream Farm, the “brisk” group consisting of Paul, Ivan, Mike G, Tony, Dave & Liz and myself, set off at 18mph+ bound for the Hartford Hall Hotel.  The early part of the ride took us out via Beeston, Alpraham and out into open countryside on our way to Winsford.  Not the prettiest town, but dodging down the back streets we exit north looking to get across the Vale Royal cut of Weaver Navigation at Meadow Bank.  Over the river, under two bridges and after one km of rough track, we exit into the outskirts of Davenham.  Here we take the back streets to re-cross the Weaver over the blue bridge on the A556.  We arrive at The Hartford Hall Hotel just at 12:00 having covered 20 miles in 90 minutes with the tandem two determined to keep on the pace.
The food arrives in a leisurely fashion and 100 minutes later we eventually get out ready for the ride back.  The weather has been dry as forecasted.  Once again a few urban backstreets get us out towards Sandiway and Cuddington.  At Norley, the drizzle starts and we plough on through a monochrome Delamere forest.  Since it is ridiculously early, we decide to head back to the Ice Cream farm.  Taking the Kelsall road, we head up and out of the forest as the drizzle stops.  The tandem duo gives us absolution to drop them, so we five motor through Kelsall and Willington bound for Tattenhall.  Mike G peels off right near Clotton heading northbound for Chester station and Ivan and Tony follow at speed, whilst Paul and I decide to go to Old Ma’s place to try it out.  It looked shut, but opened up for just the two of us.  A very brisk 40 miles today, and Paul and I ride to Chester via Saighton where the drizzle is waiting for us for the last few miles home.
See route map and/or gpx file download.
CA
Posted by Gudfadirin at 20:14 No comments:

Three of us, David M (accident recovery), Andy (Thailand trip recovery) and Trevor (fallow period recovery) elected to ride from the Ice Cream Farm to Nantwich at "Watson's Wanderers pace" i.e. about 12mph.  Due to a tail wind, we arrived early at Faddily at only 11:25 so elected to go on to Wrenbury so that we would not be too early for lunch.  The Dusty Miller was as warm and hospitable as ever.
We returned via Cholmondley and the secret road, against a stiff head wind as far as Huxley, where we split to return to cars or home respectively.
Distance covered approx 30 miles (50 k) round trip from the Ice Cream Farm or 44 miles (70 k) Oscroft to Oscroft.
A very pleasant day out in mild, dry weather.
DM
Posted by Gudfadirin at 20:12 No comments:

The cold February rain started before even reaching Ness Gardens, but things brightened up when I found the amazing number of 10 hardy cyclists raring to go. (See photo) 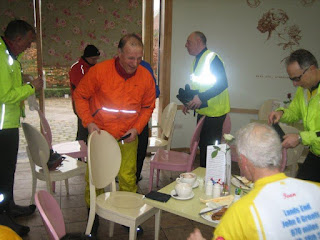 It was good to see Tony back for only his third ride and Janet was also joining us for a while.  As I was giving my briefing on “1,000 years of War in Wirral”, Dave H & Jim turned up on bikes out of the mist, but only for the coffee.
We set off at a moderate pace to warm up, along Mill Lane, through Willaston to the first of the wartime sites – the 1960’s R.O.C. (Google it) underground nuclear bunker now completely covered by grass in Raby.  Passing through the edge of the possible site of the battle in 932AD between the visiting Vikings and the local Angles at Brombrugh (modern Bromborough) we went north through Thornton Hough, and Barnston.  A brief stop was had at the early Viking parliament hill at Thingwall, similar to Tindwald on the I O M, Tingwall on Shetland & Thingvellir on Iceland.  Janet left us shortly after as we continued North through the dank and miserable day, passing Irby Mill where George had a puncture.
Delayed for 40 minutes and frozen to the quick, I cut short the route past the false WWll town built on the Dee estuary to fool enemy bombers.  Instead we continued North through Greasby & Saughall Massey.  Did anyone notice on the roadside the remains of the concrete entrances to RAF West Kirby?  Here, thousands of recruits passed through on their basic training (including Mike M’s uncle) before going off to die.  Shortly afterwards we had a difference of opinion with a Corsa driver in Moreton; probably one of Brian’s past pupils with a long memory from 1972.
Joining the sea wall at Leasowe Lighthouse, we set off east at a faster pace just to keep warm.  To commemorate the Queens recent official opening at New Brighton, a photo was taken of the CER in colour co-ordinated formation. (See 2nd photo) 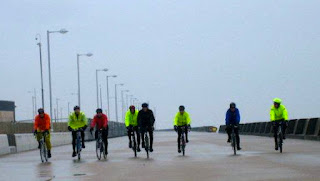 We past Perch Rock Fort built in 1829 to keep out the French.  They never came to fight the Scousers.  Turning south along the Mersey, we were met by a bitter headwind.  The Magazine Brow pub tucked behind Vale Park was a warm haven.  A welcome refuge on our first visit, this is a rabbit warren of rooms.  The beer was good, the staff were friendly but the meals were still coming out for the 9th cyclist, as the first were finishing.  I still think it’s worth a return visit.
Suitably refreshed we headed diagonally across Wirral, through Birkenhead Docks and Park, Oxton, Storeton and Neston where Brian turned off.  A cold historic 36 miles back to Ness Gardens and folks said they enjoyed the ride, which is what it’s about.
BMac

Posted by Gudfadirin at 21:30 No comments:

If last week was chilly at 3 degrees today was positively arctic with the mercury measuring -4 when I dragged the reluctant bike out of the shed.  By the time we met at Hildegard’s it had leapt up to -2 so we were glad of a warming cup of tea or coffee.  The team consisted of Paul, Trevor, Mike M, Dave H, Clive and Jim.  We were also joined for coffee by Bryan, Martin and Liz and Dave P who, recently back from international duty in warmer climes was feeling a bit chilly in the nether regions.
It was decided to head for Ellesmere and we took the normal route south to Shocklach, Threapwood and Tallarn Green crossing the main road on the way to Hanmer.  The lake was steaming slightly as the sun slowly increased in power as we crossed the undulating Shropshire moraine towards our destination.  Trevor had heard rumours of a bargain £5.95 two-course meal for the over 60's, so the Red Lion it was then.  The meal was very reasonable for the price though the steamed pudding lay a little heavily on some stomachs on the return.
We headed due north for Penley, then back towards Threapwood.  At this point Clive suggested a variation via Tilston and we got back about 15:45.  A very chilly day with max temp only 2 degrees, but a very steadily paced 41 miles and over 60 for those riding from Chester.
See route map and/or gpx file download.
JD

Posted by Gudfadirin at 20:04 No comments: