Comments, announcements and queries may be left below.

The work for some significant sections of the towpath is now complete having cost in the order of £1.25M in a partnership between Cheshire West and Chester Council with Canal and River Trust. The towpath has been widened where possible and the sections seen to date are a considerable improvement. The two photographs below are in Chester between the A51 and A41 bridges which previously was only passable on a mountain bike. 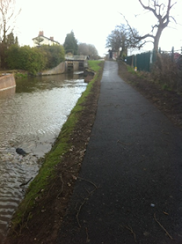 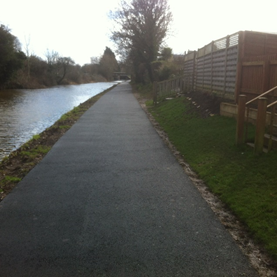 A5117 Cheshire Oaks to Elton

The highly controversial experimental lanes have been temporarily paused and traffic is able to use the bus/cycle lanes for the immediate future. The lanes were very poorly used by cyclists during the experimental period mainly due to poor connectivity at each end. It is felt that there should be a period of redesigning the routes followed by improved public consultation and engagement before any changes are made. Cycling UK have recently submitted suggestions and to date they have been favourably received. There is to be a meeting with Council Officers in March to move it forward. The Bus/Cycle Lanes on Liverpool Road near the hospital have also been temporarily paused.

Cheshire West and Chester budget has been cut by a massive 22% compared with the current year which will clearly have implications on funds available for Active Travel improvements going forward into next year which is very disappointing.

Following many comments on Planning Applications regarding provision for cycles on new developments there does appear to be more insistence by the Council for sufficient provision on new developments. Chester Cycling Campaign (affiliated to Cycling UK) have been very influential in ensuring the standards are complied with.

The Cycle Engineer from Groningen, Holland gave a presentation recently to the Sustainable Transport Task Force and showed how it has taken decades of transformation using road space reallocation to achieve cycleways used by upto 20,000 cyclists per day. Groningen is about the size of Chester so is comparable in many ways until it was explained that they are just increasing the cycle storage at the railway station to 17,500!

A487 Caernarfon and Bontnewydd BP

Construction work is well advanced with completion expected early next year (2022).  The earthworks are substantially complete and ongoing work is focused on carriageway construction and structures.

The A55 is being upgraded to reduce the collision risk associated with farm traffic using private means of access and to improve its resilience by reducing the risk of flooding (ponding in hollows).  NCR5 is to be diverted and realigned on the Northern (seaward) side of the A55 via a local road, a new farm access and a length of Shared Use Path.

We expect the draft Orders for these junction improvements to be published shortly.  The scheme provides for two at-grade roundabouts to be replaced by grade-separated (diamond) junctions with associated improvements to NCR5, which runs parallel to the A55 at Llanfairfechan, Penmaenmawr and Dwyfylchi.

We understand that Conwy CBC is to be asked to investigate local improvements which will enable Active Travellers (walkers and cyclists) to access the Conwy Estuary Trail from Llandudno Junction.

These works are substantially complete.  Walkers and cyclists have been provided with a Shared Use Path which takes them, via a series of islands and the central gyratory, through the junction.  The carriageway crossings are signal-controlled.  The traffic signals serve to calm traffic and make it easier and safer for those who choose to use the carriageway to pass through the junction safely. 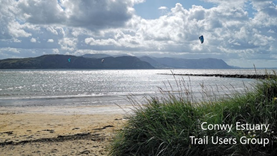 Huw Thomas, Richard Brunstrom, Gwen Thomas and I have formed a small unregistered charity to press for the completion of the Conwy Estuary Trail.  This project, which is owned by Conwy CBC, will, connect Llandudno West Shore with Conwy in the West and the village of Glan Conwy in the South.  Join our FB Users’ Group to keep up with developments.

The next stage of the ongoing coastal defence and promenade improvement works is expected to start shortly.  This will involve the import and placing of rock armour to bolster the old Victorian sea wall between The Arches and Rotary Way at Old Colwyn.  NCR5 users are likely to be diverted via Myn-y-Don Avenue and/or Abergele Road.

Coastal defence works are ongoing between the east end of Rhyl promenade and Frith Beach.  Walkers and cyclists using NCR5 are diverted along the A548 Coast Road.

The A494 existing river bridge is reportedly in a poor structural condition and the WG has been looking at options to replace it.  They have identified a preferred option, which includes a new river crossing for westbound traffic and the partial reuse of the existing River Dee Bridge for eastbound traffic.  Three lanes and a hard shoulder will extend from the River Dee to Queensferry junction which will include a new offline carriageway for westbound traffic.  This will minimise disruption during construction by maintaining current traffic flows.  The improvement scheme includes the provision of new and improved Active Travel facilities.

The A494/A55 between the Shotwick interchange and Northop Interchange is a dual 2-lane road.  It is regularly congested.  Due to the age and when the road was designed it struggles to cope with the volume of traffic and is below modern standards. There are no places for vehicles to pull in if they break down. Some junctions have slip roads that are too short or too close to the road, some of which have poor visibility.  It is at these junctions that the majority of accidents unfortunately occur.  The WG is proposing to upgrade and enhance the A548 route into North Wales as an alternative to the congested A55/A494.  This scheme is controversial because it includes a length of new green-field dual carriageway linking Northop with Kelsterton. 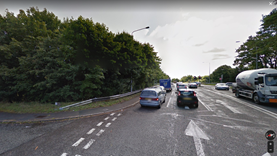 The WG webpage recognises that A483 junctions 3 to 6 are congested at peak times and goes on to say ‘We want to improve how traffic moves around Wrexham’.  CAN members have made a positive response to the latest consultation pointing to the need for more and better facilities for Active Travellers (walkers and cyclists) needing to cross the A483.

We have a small but growing band of members of The Cycle Advocacy Network based in North Wales.  We are pressing Highway Authorities to comply with the requirements of The Active Travel (Wales) Act 2013, The Well-being of Future Generations (Wales) Act 2015, WelTAG 2017 and Planning Policy Guidance PPG11, which places Active Travel (walking and cycling) high in the hierarchy of Transport.