Very cold, icy and rain forecast for late afternoon: just what we needed for the Club’s Christmas Lunch Ride!  David M rang to say he was going by car, as it was too icy.  I decided to cycle out to the meet at the Ice Cream Farm using the main roads as much as possible.  The BBC had shown their “documentary” ‘The War on Britain’s Roads’ the night before, portraying a war between motorists and cyclists.  This seemed to have been taken to heart by Chester’s drivers as I was cut up three times within the first mile and then shouted out for making use of an advanced stop line! 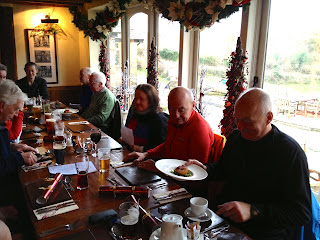 Once in the country, things calmed down and I was caught by Clive, Ivan and Ray taking the same route out.  At the Ice Cream Farm Colin was already demolishing a toasted teacake when we arrived.  Before long there were 14 of us present although one wasn’t riding.  While the rest of us chatted Jim did a fantastic job of painlessly extracting the monetary balance due from everyone for lunch.  Though how he managed to do the ride with pockets bulging with cash is another matter. 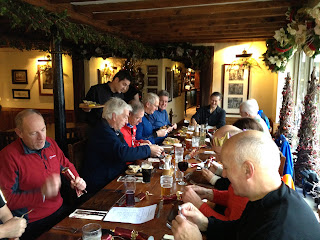 By 10:30 it was time to leave with a short circuit of the Peckforton/Bickerton hills planned to get us to The Pheasant by just after 12 noon.  I led out round Beeston and on to Bunbury before cutting across to Peckforton.  By this time we had all warmed up, the weather was more favourable and by and large the roads were clear with just a few isolated patches of ice turning slushy.  Nearing Bickerton it was clear that we wouldn’t make the pub by noon if we stuck to the planned route so I cut out most of the Bickerton circuit to head straight for the old Copper Mine pub now renamed the Sandstone.  Then it was over Harthill before taking a sharp right and the climb up to Burwardsley and the Pheasant at Higher Burwardsley. 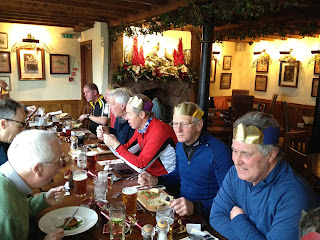 The Pheasant had reserved a window table for the 15 of us: Mike G, Colin, Dave B, David M, Clive, Ivan, Trevor, Dave P, Jim, George, Ray, Liz P, Mike M, Dave H and myself.  Once seated and refreshed with a pint, dinner was served.  Food was excellent although a complaint about the turkey was conveyed to the kitchen.  To be fair to the pub the menu described the turkey as saltimbocca style.  It would therefore be churlish not to expect some form of rolled turkey although in this case it was more of an industrial roll rather than the more traditional rolled and skewered pieces.
From The Pheasant the way back was a fast downhill descent through the lanes to the Ice Cream Farm where those with cars loaded up leaving the rest of us to make our way back to Chester.
Only 18 miles today (38 for those Chester bound) but a great day nevertheless.
See route map and/or gpx file download
BW