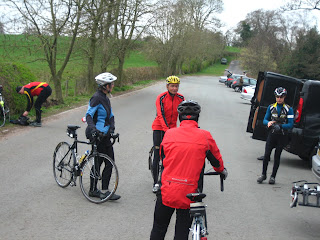 The weather forecast was rubbish and some core members were unavailable.  Nevertheless, Martin and Liz, Brian Mac, Ray, George and David M were already on their marks when I arrived at Redes Mere with Keith.  Soon Mike G arrived from Knutsford, and the ride began bang on time. We undulated towards Gawsworth before a sharp climb at Oakgrove, and on to Sutton Lane Ends.  A very steep climb up a Quiet Lane set pulses racing. Some keen vintage riders acknowledged us as they flew by just after the Haddon Farm hairpin.  The Hanging Gate pub was prettily perched on the hillside. Then left, and more conversation-stopping steep climbing. From now to lunch was a long, uplifting dive down followed by the sheltered serenity of Wildboarclough. We arrived a little early at the Stanley Arms where two tables had been reserved for us. The service was friendly, and the food just the job.
It had rained whilst we were inside, and it was becoming cooler, but we soon warmed up on the slog to the A577. We hurtled past Lamaload Reservoir, most of us confronting a Land-Rover at the point you would least want to. A few more steep banks, and more fast downhilling with panoramic views, before heaving on the anchors just above Bollington and turning right to picturesque Pot Shrigley. The climb through The Brickworks and up Bakestonedale Moor was quite demanding, but our Premiership players, Martin and Ray were soon at the top.  A short, fast stretch around the hairpin at Charles Head was followed with a sharp left up the side of Reed Hill. Despite Mike, who knew the way having stopped, thinking that he had dropped something, the tail managed to miss the turn! Blame the leader. More shortish, steep ups then a long cruise down to the rocky track leading to the East Parkgate entrance to Lyme Park. Suddenly Dave M was revolting. To be fair it was like asking Sebastian Vettel to tackle a rally stage in his Formula One car. Dave’s smooth carbon fibre road shoes, hand-stitched by fairies from silver thread spun by a thousand specially bred spiders, are likely to land you on your arse if attempting one moist step. Dave played safe with his butt and kit by returning to the road and riding down to Disley and the main entrance. We continued with our poachers approach via a rickety wooden bridge to the gatehouse. The views are usually outstanding here. We noted The Cage on a hill to our right, but were now exposed to a very cold wind and some rain as we headed down to The Hall and some shelter. Dave appeared after a few minutes, and we all snaked down the teeth-rattling, wooded path to East Parkgate. 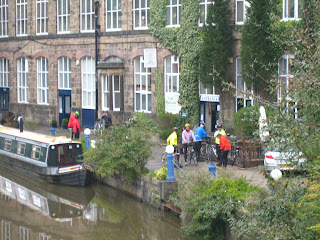 The troops were restless for tea and cake, but I rejected the slow-serving Victorian Coffee House as we were booked in at Bollington for 3:30. There were fine views to our right over Manchester and Stockport. We passed Shrigley Hall, turned up round the corner and then into a delightful ‘secret lane’. We walked over the wet, steep cobbles on reaching Bollington’s stone houses, and cycled up to the Macclesfield Canal. Café Waterside was comfortable, friendly, and generous with its cake and drink. Forty minutes later we were climbing the tough little slopes out of well-heeled Prestbury, and soon speeding past Birtles Hall and Henbury Hall back to the cars. Mike turned down a lift and cycled back to Knutsford. 40 very hard, very hilly miles had been covered. Martin couldn’t believe how long we had taken, but was impressed with the 1,300metres of ascent that he had recorded. George and I conjectured if being nearly a year older was what made it seem harder than last time. Brian Mac was concerned about the amount of punishment he had taken! Ah well, ‘no pain, no gain’! Nevertheless, the ‘Championship’ riders did themselves proud, never really straggling. Limping, recently non-league Keith, with his reconstructed knee had been, indefatigable. I certainly enjoyed it and was grateful for the support.
DH