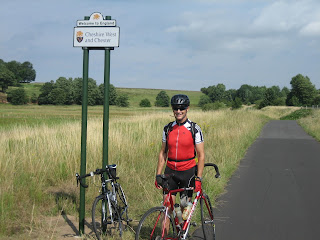 With the long ride happening today, only a select group was expected at Little Roodee. It turned out to be very select with just Brian Mac and Steve, though Bryan joined us for coffee at the start.
Brian proposed a tour of the Wirral and we set off along the River Dee to Hawarden Bridge and then across Burton Marshes (PIC 1) before striking out NW for the Mersey shore by way of Port Sunlight. Passing the Lever Art Gallery our eyes were caught be the sight of a dozen new and shiny cycles, including a tandem, set out on the grass.  With a small detour we discovered a young guy who’d just launched a cycle hire enterprise (www.wirralcycle.weebly.com). 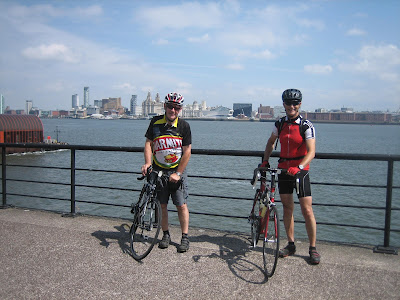 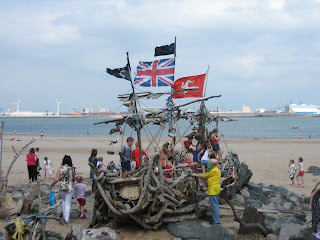 Shortly after we hit the shoreline and followed this on generally quiet roads and tracks to Birkenhead and a photo stop (PIC 2) with Liverpool and the Three Graces behind us. Just up the road was Gallagher’s Pub and Barbers. Yes a barbers!, though drinking and having a haircut at the same time don’t mix – you get hairs in your pint. It has the distinction of being a CAMRA Merseyside pub of the year. It served good beer, but unfortunately not food, although they were open to customers bringing their own from the café at 32 Market St. 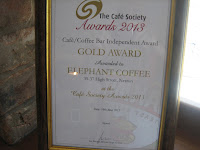 After our stop we headed for the seaside and the crowds, passing a pirate ship made from driftwood swarming with children (PIC 3), as we followed the Wallasey shoreline to New Brighton and loads of families enjoying the hot sunshine. Weaving carefully through the crowds we then followed the north Wirral coast to West Kirby, there picking up the Wirral Way and heading speedily down to our afternoon tea stop, Elephant Coffee in Neston, winner of the Café Society’s Gold Award (PIC 4).
Being on his doorstep, Brian headed home shortly after and Steve continued back until meeting the Greenway and heading home to Kelsall. If we’d returned to the Little Roodee it would have made a 62 mile round trip.
See route map and/or gpx file download.
SH