I cycled out from home and was meeting John at the Rake and Pikel to ride together to Cleopatra’s at Holt.  On Wednesday John had completed a 120K audax involving 3000 meters of climbing so I was hoping he would go easy today!!
On such a lovely morning with the prospects of a good day it wasn’t surprising to see such a good turnout of riders.  There were going to be 3 groups today and I was leading the Brisk ride along with John W, Tom, Paul, Ken and John M. My route was a round trip of 68 miles to Llanymynech.
We set off from the café and headed down to the A534 and crossed over to the B5130, which we followed to Cross Lanes. We take a right turn onto Bwgan ddu lane where we find a young bullock blocking our path. We were passed by a car driver who led the way forward, only to shove the bull further along the road. John took the bull by the horns and got up to speed and passed the animal and ushered it into a farmer’s mansion front garden. He promptly closed the drive gates and hoped the bull would now be safe. No idea if this was the owner’s beast but it seemed at home chomping away at his shrubs!!! 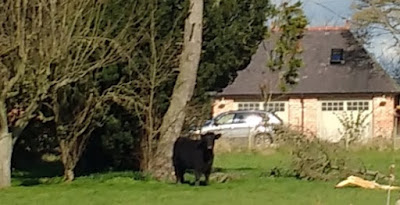 We continued our ride and passed through Overton and on to St Martins. It was rumoured the mods were heading this way also but at 11:30 we saw no sign of them yet. Onwards passing Gobowen and Whittington and on to Queenshead the Brisk group today are a good peloton and enjoying a good pace and I could even hear the happy banter behind.  The sun was shining and the daffodils were still splendid on the kerbside displays. What lovely flowers to take us into summer. 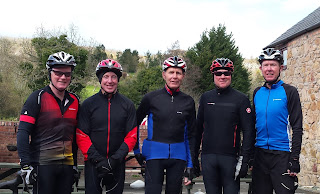 We take the B4398 from Knockin via Maesbrook and into Llanymynech. On arrival at the Dolphin Inn, which I had contacted on Wednesday to ensure they were open, we had a table set up for six. As this week has seen the introduction of the CER hot list of eating-places there was a debate from a borders man that this is not our usual eating spot in the village. For me when there is a choice of venues it is worth trying them out before discarding all alternatives and the Dolphin was a very friendly pub and the food of good quality. Perhaps for Tom the ladies also enjoying lunch may have been a bit senior for him but he chose to sit nearest to them for a chat!!
Back in the saddle we retrace a little of our route before taking a turn and going uphill only to find nearly at the top I had missed the turning. Turning round we raced back down the hill and the turning was a left nearly at the bottom but this little detour added to our 2654 feet of climb for the day.
Back on track we are riding along some very quiet and good dry lanes passing through Pant and Moreton and on to Babbinswood and Whittington. We turn right passed the lake onto the A495 before turning left to Hindford. My next missed turn was during a fast down hill descent and again going upwards before halting to return down and taking the correct turn. Every little helps in the ascent climbs.
We again pass through Overton and on the Bangor on Dee where there is jockeying for pole position for the descent passing the race course and Paul was well in front on his very black Trek with Tom hanging onto his rear wheel. It was then the normal route back to Farndon where we arrive at 16:30. Ken and John are going to return to Holt and try a coffee if Cleopatra’s is still open while the remaining four continue back to Chester.
Today’s ride was for me the first summers day ride of 90 miles to and from home and probable 100+ for the other three, A fantastic day with no incidents other than a couple of minor wrong ways so thank you to my riders today for making it such fun!!
See route map and/or gpx file download.
ID