It was a good turnout at Manley Mere on a warm Indian summer’s day in late September when 5 lucky souls followed Dave H on the Moderate ride - Andy, Clive, John B, Jim and Macca.  Prior to their arrival there, three riders all came off separately at the same corner as they turned into the cafe entrance.  Trevor was nursing his blooded wounds and decided to go home, Clive has a huge scrape on his thigh which he insisted on dropping his bib to show everyone, while I hardly had a scratch.  Going out we all examined the road surface but could see no reason for a fall to occur, gremlins maybe.  Bryan and Dave M had joined us for coffee as well.
It was thankfully a completely uneventful morning after that early drama as we meandered through the warm countryside over Acton Bridge and Arley Hall to the Great Budworth Ice Cream Farm.  We all sat outside for lunch, probably for the last time this year, with the highlight being a marzipan milk-shake (not recommended) 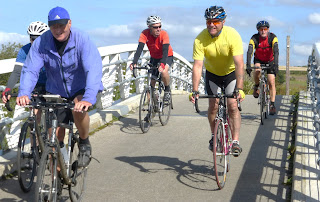 The afternoon cycle back was a classic easy-ride through the crops being harvested and along the canal towpath to bring us out near Kingsley.  Then it was across the hills in the forest, down to Ashton and back to Manley having covered 44 miles from the cafe.