The brisk riders, John W, Nick and myself, were out on Tuesday and theThursday ride was discussed during lunch. John suggested an Audax ride he wanted to do starting at Marple and was 60+ miles and 7500ft of ascent. Sounds easy 60 miles and the ascent should be ok, so it was decided a car assist would be required. Nick was unable to ride although expressed disappointment at not being available!! (I think he knew the route). So the Thursday ride would consist of John W, Ken and myself.

We arrived at Marple at 09:15 and the journey from Chester outwards was reasonably good considering the morning commute for a lot of day workers. Tea and toast was first on the agenda and by 10:00 we were heading out of town on a glorious autumn morning. Judging your wardrobe at this time of year is not always straight forward as the first few miles is a 7-10% gradient just getting out of the town!! Warmed up jackets off, and it is a comfortable ride along the A626 passing through Marple Bridge and Chisworth where we stop for the first photo shoot of the day. 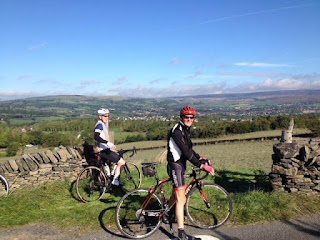 We continue this road until Glossop and join the A57 to wind up and with a good wind the Snake Pass. Up and up we ride and it is getting warmer, but traffic is light but there are couple of road works with traffic lights. Mr Green lights as we pass through both. Hitting the summit, it is then the hurtle down and, with a good wind, we are 40+ mph before John brakes to a stop as he's lost his audax card. Ken and I wait at the Snake Pass inn but unfortunately it is closed for refurbishment. John rejoins us and we again continue our descent down to the Lady Bower reservoir.The water levels are quite low but as winter approaches no doubt they'll soon raise. 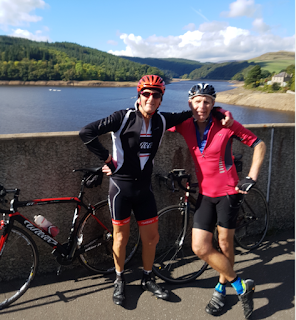 We have ridden approx. 27 miles and lunch is looming at 34 miles at the Barrel Inn at Bretton. We pass through Hathersage before taking a right turning heading up hill. I stop to query the route, but John is correct and our Garmin routes are slightly out of date!! Up and up still, but we pull up as John has a front flat. New tube replaced and were off along very pleasant lanes and the scenery is well worth the effort of continually riding uphill on such a sunny day.

We arrive at our lunch stop and again the views are awesome at 1300ft. The Barrel is noted in the Doomsday book and a stop-over for transporters delivering Cheshire salt. The inn was very busy but we enjoy the opportunity to relax and chat.

A photo call outside and a diner asked to take a photo, she must have enjoyed the wine as on both photos taken her finger covered the screen. Ah well, off we go and enjoy a down hill free wheel to get the legs moving again. We are in the heart of the Peak District passing the known locations of Ashford in the Water, Sheldon Quarry and Peak Quarry where a couple of class 37's trains belonging to DRS from Cumbria, were loading stone and Dove Dale (stn).

We cycle into Moyash for John to get his audax card stamped in the local shop; an offer of ice cream was made but rejected as we still have 2000 ft of climbing to do. We're now on a single track lane called the Jarnett and the temperature has started to fall and it is getting quite chilly. Millers Dale and Worm Hill - a moan of oh no not another! as I am just about done in. We drop down to Whaley Bridge in time for the rush hour traffic and have to cycle along the pavement. Just a couple more bumps and we are back into Marple and back in the café where we started our ride.

A 68 mile round trip, unforgettable scenery but the best was the company. How John continues to do these audax rides is unfathomable. It was hard and high on the energy scales. A total of 7549 feet of ascent in a shortish ride. I'll take a rain check on his next idea.A good Brisk ride but at a pace of 13mph.