Clive had devised a route for today which both Mod and Brisk groups took. Our destination was to be the Old Barn Café in Marton, north of Congleton: https://www.facebook.com/theoldbarnmarton. The weather was on best behaviour with warm conditions after a long cool spell and even some sunshine expected.  This was enough to tempt a good many members out to our start at Rose Farm.  The Mods comprised myself, Trevor, Dave H, Keith, George, Jim and a prospective member Tony. The Brisk members were Clive, Ken and Nick, and their adventures are described in a brief postscript below. Also out were David M and Neil who chose to do their own thing.

We set out through Cotebrook and rode past Oulton Park, to pick up the old rail line the Whitegate Way taking us onto Winsford. Here Jim left us as planned and made his own way back.  After a quick dash along the A530 south of Middlewich, we passed through Ettily Heath and then followed another disused railway line to skirt south of Sandbach and trek northwards keeping to the west of Congleton.

We hit the A34 at Marton and turned right to find our lunch stop. The Old Barn Café was not immediately obvious for it lies within a former farm courtyard now hosting several small enterprises.  However, it was well worth finding and welcomes cycling groups.  The Brisk riders were finishing off their meals as we arrived. None of the Mods partook of alcohol during our meal and one chose a vegetarian option, but before concluding that we had all started to adopt a healthier diet, I should report that one full English and two pies were also ordered. 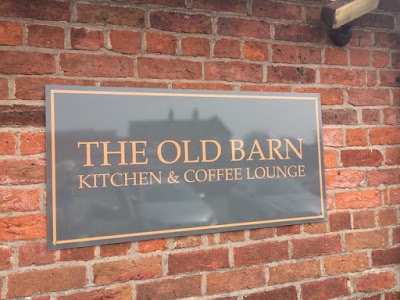 Our return route covered more familiar territory, but was very pleasant being even warmer and having a moderate tailwind.  We passed by Clonter Opera, which I understand is a Cheshire version of Glyndebourne, then Twemlow Green, Cranage and Lach Dennis.  After Davenham we followed the dual carriageway as far as the blue Harford Bridge and then took a track down to the Weaver Navigation – the third of our off-road excursions today.  We were appreciating the quiet watery scene when the West Coast Virgin Train thundered across the viaduct overhead.  Crossing the Navigation by a set of locks, we emerged into Vale Royal Abbey Golf Club.  Then it was back past Little Budworth, on to Cotebrook and then back to Rose Farm. On the way Tony dropped off to head for Tarporley, Keith for Runcorn and myself to Kelsall via Heath Lane.

Our total mileage was 56.  This was a cracking route from Clive, which makes two in a row after last week’s special ride.  The morning’s route had been exceptional for passing along many quiet new lanes for us, while running close to our more familiar routes.

Our brisk riders were Ken, Nick and myself and we followed the same route to Marton except for an off-piste explore around Ettiley Heath. We arrived at the cafe in under two hours, and were ready to leave as the Mods arrived. Nick diverted off to Eaton where his car was; Ken to Christleton and me to Duddon for our respective vehicles. Average speed was just under 16mph for these 56 miles.