The turnout was surprisingly good at Alison's, and the service was friendly and efficient. Despite Wednesday's awful weather, and impending additional lockdown restrictions, riders appeared to have had faith in the much-improved weather forecast for Thursday. And they were not wrong! We sat in the open air with the sun on our faces supping our coffees. We had about four spaced tables, and were careful to maintain reasonable social distancing, but a couple of riders stayed on the outside of the fenced patio, and Ivan and John arrived later for a brisk ride, having decided some time ago, to give the group gathering a miss. Oh, for the carefree times of only a few months ago! It was good to meet up with Jim again, although he was not able to join us for the day. Anyway, thanks to the usual goodwill, we managed to organise ourselves into three groups with three leaders and three different planned destinations.

My moderate group consisted of Steve Tan, Andy Barber, Dave Matthews and Mike Gilbert. It was great to have Mike back, and in good nick. Dave was trying to stuff jam teacakes down as it was time to go. We headed for Beeston Castle before turning south alongside the Peckforton Hills, and then left to Spurstow. Dave suggested a tiny lane route to Brindley, which initially required a short dash down the A49, but was then a quiet, delightful change. We were on familiar lanes to Larden Green, Chorley and Wrenbury, but it is unusual for us to ride them on the way out. At Wrenbury we turned right and headed south through Pinsley Green, then left under the railway, and stayed east in this hummocky topography. Dave Matthews caught a puncture, but Steve Rocket Robin Hood Tan and Barber The Beast had forged ahead, well beyond hailing distance by this time. This would never have happened in Ray Hardman's day! I rang the pre-booked Black Bear to tell them that we were five not four and were going to be a little late. Our split quintet managed to, eventually, make phone contact with each other, and I met Steve and Andy riding back from the edge of Whitchurch, with Dave and Mike behind, now on their way again. 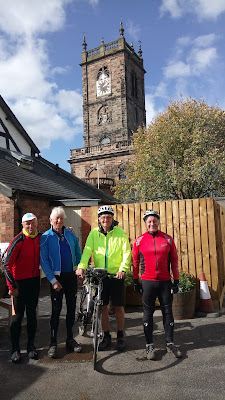 Photos by Steve T and Mike G
Lunch was great with The Black Bear being very well organised on the sanitiser, spacing and mask front. The food was really good, (my hake and mussels dish was mouth-watering), and our reserved table was large enough to enable comfortable social distancing. 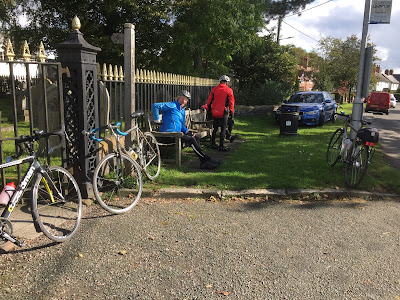 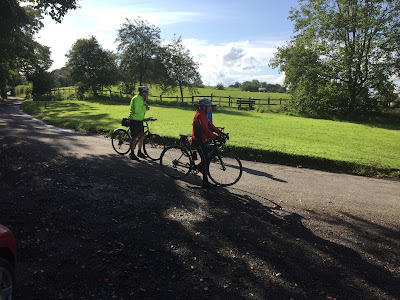 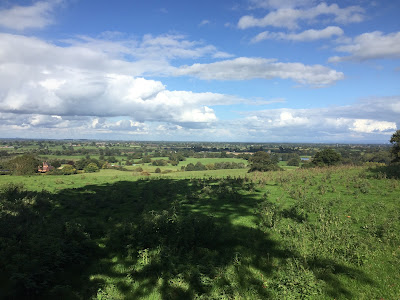 The route home was planned to be a few miles shorter than our morning meandering. We headed out the usual route - the wrong way down a one way street! Past the hospital we wound our way up to Wirswall. Mike took a picture of the lovely views across the countryside from the top of the climb. We crossed the A49 to Bickley, then, unusually, took the small lane through Hetherson Green. Dave “I don’t need maps” Matthews and Mike, a former orienteering star, were invaluable in ensuring we went the correct way at strange junctions, whilst exploring. We swooped past Egerton Hall and battered up the bank to Hampton Post, before turning right and making the long climb to Broxton Old Hall. Dave had taken his leave by then to cut across for home. Earlier, Steve and Mike had joked that we should call our group Team Farmacia, because of the amount of medicines stored within our bodies (and because we liked pasta?). Actually, I was the only one of the five of us not having to manage a serious medical condition. It says a lot that Mike has not finished his course of treatment, but has for weeks been building up his mileage alone, in order to regain his fitness, and Steve was in hospital during the week, prescribed beta blockers, and still turned up to ride strongly a couple of days later. I really respect the positivity and determination of my four friends. We completed the ride via Brown Knoll and the climb to Bolesworth Castle, with the “patients” outpacing me. Plenty of sunshine, relaxing company and a downhill finish. A bonus, a bathe in the last light and warmth of a summer thought over.