For two reasons, it was with some trepidation that I offered a moderate ride to Ellesmere from Tattenhall. First, I was going to use my new bike computer for navigation. I’d never used if before and I hadn’t even got the route loaded. Secondly, I could see that the group was going to be very large and I had read about Trevor’s problems of last week in losing people.

However, after engaging the help of our resident ‘techie’ (Steve Hu), I had the route up on the computer and just before 10.30 there were 10 mods ready to go - Steves Hu, Ha and T, Daves P and H, Trevor, Andy B, Alan, Richard and Electric Pete. Then, just as we were about to roll, Neil turned up, gasping for breath. He’d gone to Meadow Lea, having mis-read the blog. He only realized his error when he got there, even though he’d passed Trevor going the other way. So, he’d hot-footed it the twenty odd miles to Alison’s arriving at 10.29.

There was light drizzle in the air as we set off, but the weather was forecast to get better as the day went on. We’d got as far as crossing the A41 when the cry went up to wait. Trevor’s chain had come off and it took a few minutes to rectify this. Fortunately, that was the only ‘mechanical’ we suffered all day.

The route took us through Clutton and Tilston to Malpas. As we approached Malpas, Neil decided to go his own way. He’d already ridden from home to Meadow Lea and Tattenhall, so another 40 miles was not appealing to him.

After crossing into Wales at Higher Wych, we were soon in the Shropshire lanes, with little traffic and (mostly) smooth roads.  A brief stop was made at Starks Bridge over the Prees Arm of the Shropshire Union Canal for a photo call. 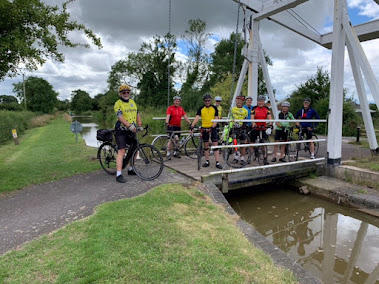 Passing through Lyneal and Colemere, we arrived in Ellesmere just before 1pm. There followed a degree of confusion about where we were going to sit (inside or out) and when we could order what (drink/food) and pay for it. The peculiarities of the system run at The Red Lion were baffling, but we eventually ordered and paid for our food and drink and the food arrived surprisingly quickly. We sat outside in the sunshine, batting away wasps which seemed to be attracted even to chips!

We left the pub along Church Street, taking the right turn into Swan Hill, where we paused for a second photo beside the unusual ‘Toad crossing’ road sign. Apparently, the road is closed between 19.00 and 05.00 throughout March and April each year to allow toads, which have been hibernating during the winter, to migrate to their traditional breeding grounds in ponds and the mere. Volunteers help them across the road. 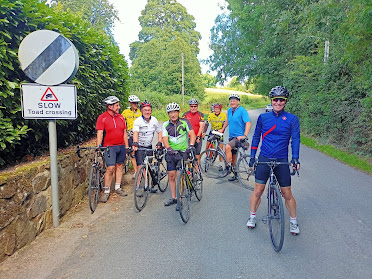 Our route back took us through Penley and Worthenbury to Shocklach. As we turned right for Tilston by The Bull pub, Alan, Andy B, Richard and Electric Pete left us, heading for their respective homes. As we turned left at The Carden Arms, heading for Stretton, Dave P suggested a stop at The Lost Barn. It was set up in 2018 and has built up a strong reputation for their speciality coffee, which is roasted on site. Five of us stopped here, but Steve Hu pressed on as he still had plenty of miles to cover.

Suitably refreshed, the ‘fabulous five’ pressed on to Tattenhall and our journey’s end.  My initial trepidation turned out to be unfounded as we didn’t lose anyone and my new computer took us around the planned route without any problems other than those I brought on myself through lack of familiarity with the new device. Thanks to Steve Hu for acting as ‘sweeper’ and to the rest of my companions for a great day out in the English and Welsh countryside.