A bright last day of September beckoned with autumn definitely in the air – sunny and largely dry as promised by the forecasters.  This brought out 11 riders to Bellis Garden Centre café (Dave M, Dave H, Brian, Graham and Jane, Liz and Dave, Peter, George and Trevor and I).  I had planned a route with an unusual lunch destination south of Wem, taking in an eponymously named village for vanity’s sake.  With everyone in sheep mode, we were off out round the back of Farndon, and then to Tallarn Green and Sarn via Shocklach and Dog Lane. 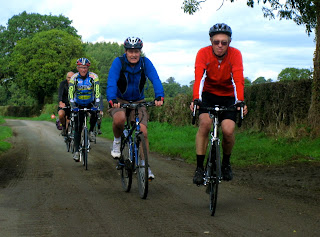 
It was tempting to go via Dymock’s Mill but the longer route to Painter’s Green was selected instead.  Down passed Fenns Bank, we headed for Whixall and Waterloo and eventually into Wem itself.  Out of Wem on the main B road towards Shrewsbury, the original plan was to take a short diversion via Clive village and then double back to Sleap.  However with the rumbling sound of many stomachs drowning out the traffic on the B5476, I decided to go to Sleap directly.  Turning north for the first time the signs for the aerodrome came into view and, 29 miles from Holt, we arrived for lunch. 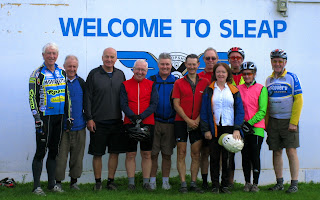 Sleap Aerodrome website mentions a restaurant but this was definitely a café.  Nevertheless the prompt service and elevated view over the airfield of light aircraft landing and taking off coupled with pilots from the nearby RAF Shawbury practising hovering in helicopters, made up for the rather meagre lunch portions.  After getting permission from local air traffic control, we were allowed to circle the airfield on the original WW2 aprons to exit the airfield and start our way NW to Holt. 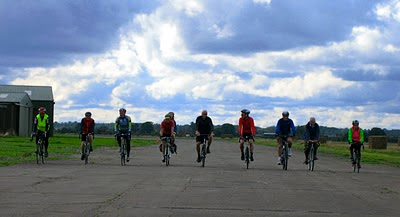 A short length of old road found us out of the airfield and onto very quiet and level lanes on our way to Loppington.  Shimmying through the village, we headed for Welshampton via Lyneal.  At Welshampton, Dave M struck out solo for Oscroft via Malpas direction as the rest of us continued NW to Penley. 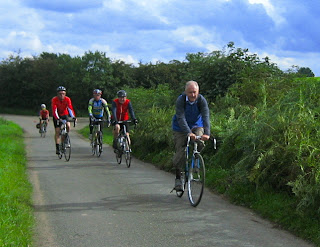 The usual way back was employed to get to Bangor via Cloy and then down the various lanes to Farndon.  With a group of this size, there were inevitable delays and incidents, apart from a few stops for directional corrections.  Graham was bitten by a horsefly and attacked by a rather large farm dog, whilst Dave H suffered a rear wheel puncture, and the tandem picked up a slow on the rear wheel within a few mile of Holt.  With only a few drops of rain late in the day, the round trip was just short of 54 miles, with those going back to Chester running up around 80+ miles.
See route map and/or gpx file download.
CA