Eleven of us met at Nino’s for our special ride: Steve T, Dave H, Keith B, Bob, Steve H, John M, Nick, Paul, Trevor and Clive. George couldn’t make it for personal reasons. We thought Andy B might cycle across from Mold, but as he knew the area we decided to set off and he could catch us up. At 10:30, having had our breakfast fill, we set off for Penrhyn Bay with rain jackets on as it was thick cloud, a light drizzle and westerly wind.

Arriving at the hill out of Penrhyn Bay taking us over the Little Orme, Paul’s inner tube blew. Regrouping at the top 20 minutes later we dropped down to Llandudno and cycling along the prom saw two sailing ships and the tops of all the surrounding hills covered in cloud. As we were climbing the Great Orme Paul felt our progress was too quick and decided to have another puncture. Whilst eight of us observed Paul expertly repairing the slit in his rear tyre and replacing the inner tube we reminisced how we missed our travelling technician Dave Pipe.
Eventually we reached the Orme Café in thick mist and rain with views the ‘blind’ would have experienced. Our brisk members were very proud of the pace, 6 miles in the first hour. Trevor after having recently returned from holidaying in America for over 6 weeks was struggling and despite our assurances that it would get easier, opted to cycle to Prestatyn and return home. Dropping into West Shore Llandudno, Trevor departed and we continued on, then Dave H decided to join Paul’s puncture club. He also discovered that he had lost his wallet probably at Nino’s allowing some poor Welsh pensioners to benefit from his English generosity.

As time was getting on, and we didn’t have Dave P, Dave H and Keith B decided they would sort out the puncture and cycle direct to our lunch stop the Old Ship in Trefriw. What we didn’t realise is they ended up entertaining the locals imitating Laurel & Hardy, showing them how to change an innertube twice, and as a reward they were offered tea.

The remaining eight went on to Deganwy then Conwy Quay taking the estuary path/cycleway. It was here some decided to have a comfort break and we lost Paul, John M and Nick as they admired the toilet’s stone work and views from the quayside. After some frantic phoning, garbled messages and backtracking; we decided to meet up at Trefriw. The remaining five following the route I had planned.

Following the scenic route through Rowen we were suddenly joined by the missing trio as we dropped down to the B5106 near Dolgarrog.  Also, the cloud was lifting and the sun started to shine. No further incidents on the way to the Old Ship, but we were half expecting Dave H and Keith B to be enjoying a pudding when we arrived, but were disappointed. Lunch of baguettes and chips was had with some pleasant ale. Steve T reported that Dave H and Keith T whilst changing the tubes discovered Dave H’s pump didn’t work and Keith had run out of the four gas cylinders he had. We also awarded Ray of the brisk group, the most organised CER member when it comes changing inner tubes. 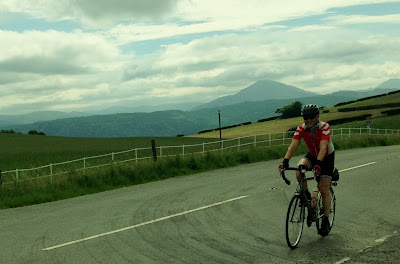 Following a relaxed lunch, we set off for Llanrwst taking in the suspension bridge crossing of the Conwy. It started to get warm as we climbed the A458, the ‘Strava Boys’ deciding to have a race to the top, where views of Snowdon, Moel Siabod and the Carneddau range, plus the Conwy Valley were had. Bob said he was struggling and his legs were gone, so allowing him plenty of rest and taking our time, we enjoyed cycling the B5113 towards Colwyn Bay. As we cycled, to the east we had lovely views of the Clwydian Range, Denbigh Moor and intervening countryside. Shortly after the Holland Arms we turned right and followed some narrow lanes, dropping down to Dolwen, Rhyd-y-foel and the seafront near Llandullas. Sustrans Route 5 took us back along the coast to Rhos on Sea returning to Nino’s just before 5 pm covering about 51 miles and 3,300 feet of climbing. 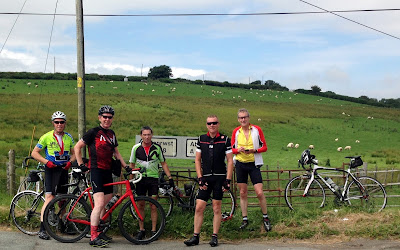 Shortly afterwards the intrepid duo of Dave H and Keith B arrived after visiting Conwy and other parts in the locality including a beach I understand. Dave H was finally reunited with his wallet (still full) so it all ended happily. As John M said ‘This was a ride of two halves’.