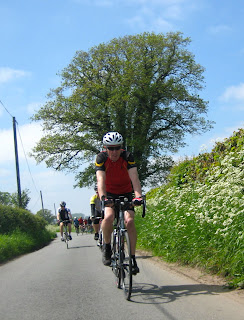 The Met Office must have run today's forecast through an old BBC micro instead of a Cray Supercomputer because the promised wall-to-wall sunshine was wall-to-wall cloud and it was cold! Anyway, there was a plethora of CER riders at Hildegard’s cafe.
Photographs by Brian MacDonald

I had met up in Hoole with Ray and Ivan who was on his first CER ride since his accident. We had taken the long way round to Holt notching up 18 miles before the start. It was good to see Bryan's happy demeanour as he surveyed his brood. Trevor had a proposed ride to Ellesmere and mine by coincidence, was in the same general direction but going a bit further south. We agreed to ride out together and then see who wanted to lunch at the Red Lion as opposed to the Leaking Tap in Cockshutt. So I led out via the back lanes to Bangor a disorganised "peloton" consisting of Jennifer, Liz and Martin, Liz and Dave, Trevor, Dave M, Andy, Jan, Brian Mac, Ray, Ivan and new rider Colin. 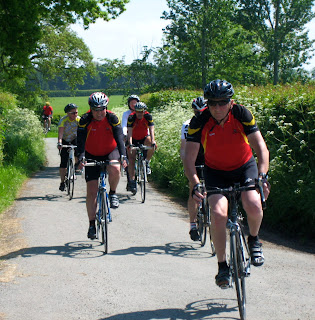 Fooling them all in Bangor, we head out and up the hill towards Worthenbury before turning down to Holly Bush. We take the flattest route using the tiny lanes via Sandy Lane to access Ellesmere. Here Andy and Dave M decide to bail out, so the rest of us cycle through Ellesmere on the Tetchill Road. Turning left over the canal we swing off through Lee down new lanes bound for Cockshutt. As last week I had rung the pub before we set off and they assured us we could be accommodated for lunch. So after a modest 23 miles we arrive and were expected, in fact I think we were the only lunchtime clients!  Third time lucky this week. The table was set for us and mainly we opt for the good value two-courser of standard pub fare. 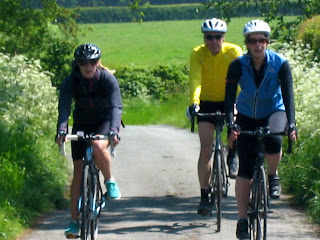 Anyway unbeknownst to us there was a surprise in store as we left at 14:00 - the clouds had cleared and the summer sun was out. The ride back was quintessentially English countryside riding down the tiniest lanes I could find via English Frankton, Lyneal, Hampton Wood, Street Lydan, Mulsford and Shocklach.
Approaching Holt and Farndon, we run on the new road surface at 20mph with Ivan and Martin leading the way. Here after 45 miles, we split up into those with cars and those riding home.
Back home after 76 miles, I reflect upon the idyllic afternoon's riding in warmish sunshine down wild flower bedecked lanes. It's what cycling is all about, for me anyway.
See route map and/or gpx file download.
CA
Posted by Gudfadirin at 19:41