Mixed bag of weather predicted for the day as eleven of us congregated at Hildegard’s for the ride; Liz & Martin, Liz and Dave P (tandem), Jan, Brian Mac, Petar, Ray, Steve, Trevor and Mike G.  Bryan came out to survey his ‘clan’ and enjoy a morning coffee. He is not yet up to riding with us but I suggest when he does we have a ‘special ride’ to celebrate his return to the saddle.
Brian Mac enquired whether I had any suggestions for a lunch stop, I knew of a reasonable pub next to the Montgomery canal at Maesbury Marsh (Navigation Inn) a round trip of about 55 miles and this was accepted. 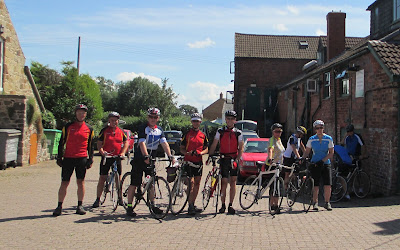 With a south westerly breeze against us we took the minor roads to Sutton Green, on through Bangor on Dee passing to the east of Overton via Cloy Hall and Adrafelin; then on through Dudleston Heath, Perthy and Welsh Frankton taking in the panoramic views to be found. We joined the A495 for a short length before turning left to Babbinswood, crossing the A5 near Aston Hall. The tandem duo were having difficulty keeping up with the main group of largely ‘brisk riders’ and decided they would proceed at a more leisurely pace to our lunch stop. As we were not far away I showed Dave P the intended route we were taking and agreed to meet up later. On to Maesbury Marsh with the remainder of the group or so I thought until when ordering lunch ‘Where’s Trevor & Petar?’ Mutterings of Bryan having me publicly flogged for losing two members of the group particularly after what happened earlier in the year were raised. Telephone calls were made to respective mobiles but no answer. Then out of the ‘blue’ they arrived about twenty minutes later having had a little tour of Maesbury and remembering the pub is next to the canal. 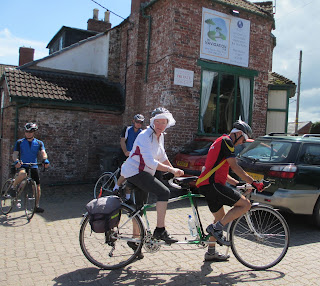 After pleasant lunch and some nice ‘Stonehouse Station Bitter’ bitter we set off passing through Woolston, with a ‘tail wind’ taking us through West Felton and Grimpo. We bypassed Ellesmere by turning right at Tetchill and on through Lee and Colemere taking in some of the ‘Meres’ crossing the A495 at Welshampton. The sun was out and the cycling conditions were good.
Return to Hildegard’s was via Breaden Heath, Penley, Threapwood and Shocklach the group arriving back just after four thirty having covered 56 miles. Those from Chester and beyond will have cycled in excess of 75 plus miles.
Overall a very pleasant cycle ride.
MG