Although this was our last ride from Alyn Waters this winter, a good sized group of eight, consisting of Dave and Liz P, Dave H, Steve T, Keith, Ray, myself and Andy (on his first ride for some time) met for tea and crumpet at the café, to be joined by Brian Mac who was doing a short ride.
The plan was to aim for Llangollen, but with the fall back choice of the Telford at Pontcysyllite if time was short. We set off for Windy Hill to be met immediately with ‘Road Closed’ signs. This was not on the agenda so we decided to press on regardless; a good choice as it turned out as there was no sign of road workers though some grids had been tampered with. Onward and upward onto ‘the steps’ which seem to get steeper every year, then Minera, Talwern and Rhosllanerchrugog before dropping down into Acrefair. Heading for the canal basin we realised that time was slipping away so stopped for lunch. I would like to say that the pub was warm and cosy but it wasn’t, though the food was welcome, and we were soon back in the saddle and heading across the famous aqueduct towards Chirk. 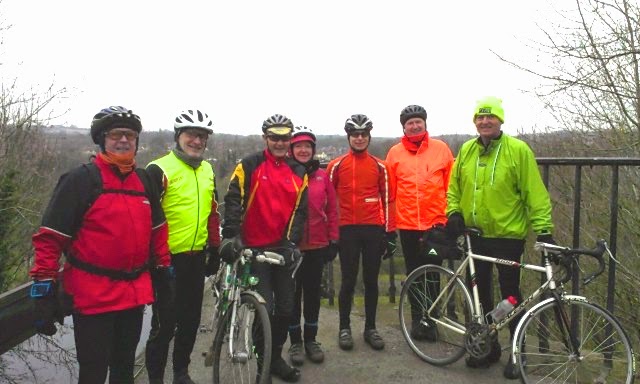 Once over the Dee valley at Pentre we took the old main road, past the local landfill site and uphill to Cefnmawr, passing the well-known caravan sales site at the top of the hill. We noticed the usual large range of second hand vans on offer in any colour as long as you like mossy green!
Northwards towards Ruabon, the town with more nail salons than population, and onto the back lane past New Hall recycling site, the two well known slag heaps that we all pass alongside the A483, and the old brickworks; a journey full of interest and architectural heritage! To the west of Wrexham we followed the lanes alongside the main road until we reached New Broughton. Here we went north along quite pleasant lanes and suburbs until we picked up our outward route at Windy Hill.
However, the trials hadn’t finished yet as the mysterious road workers had appeared and were laying a lovely smooth layer of tarmac down our off route, and they definitely didn’t want several sets of tramlines spoiling the pristine surface. Carrying our bikes up the hedge bank we passed without any aggravation and arrived safely back at Alyn Waters in time for afternoon tea. All except Ray that is who had ridden out and set off for Caergwrle and Chester; a total distance of 60 miles for him but only 30 for us although they were very hilly.
JD