For those riding from Chester against strong headwinds, it had already been a bit of effort to reach the Ice Cream Farm at Tattenhall. In fact, due to various reasons, at least three riders were returning home after coffee. Jim hadn't any domestic slavery excuses left, but was still recovering from a cold from many weeks ago. It was great to see Bryan, but he had enjoyed so many weeks on his back, lazing and reading in the Caribbean sun, that his legs no longer worked.  At least they had managed to get to the cafe! I wonder if some of our members, as school kids, used to take a note from their mum to excuse them from outside games in the winter. Chris had a proper doctor's note, having recently endured a knee arthroscopy. Brian Mac had plucked up the courage to travel past Neston Marshes this week, making the moderate group a slightly sad threesome of Macca, Keith and myself. Steve Tan took pity and decided to join us. Whitchurch was our destination.

We headed for Harthill with Keith going well and Tanny flying. Opposite Cholmondeley Castle I turned left for Bickley Moss in order to cross the A49 for Norbury Common. I must have gone slightly wrong, because I think we landed at Buckley Town, and turned right by mistake. My adjustment was to head south east via Bickleywood and Bradley Common, or due south to Grindley Brook via Bell o' th' Hill. However, I followed Macca up a cycle path just before reaching the A41, so missing the intended turn on the other side.  I was, once again, leading worse than Corbyn, and soon riding the lumpy road to Malpas from No Mans Heath. I wasn't a happy bunny! Anyway, we made undulating progress down from Malpas, against the wind, belatedly now heading straight for Whitchurch along the B5395. The Black Bear was great, and we had a very convivial lunch. 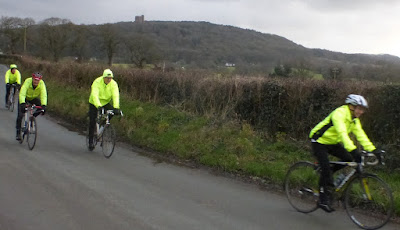 My penchant for trying different little lanes, despite the high wind discouraging me from checking my map thoroughly, led us off route just once more on the way home. The route back was mainly wind assisted and drier than the morning. We travelled north past the hospital, and then took a more easterly route than normal to Marbury.  Norbury and Gauntons Bank followed, then Chorley and Larden Green. My new, quiet lane link heading for Radmore Green disturbed an intimate moment for a young couple in a car. Ah! Those were the days! 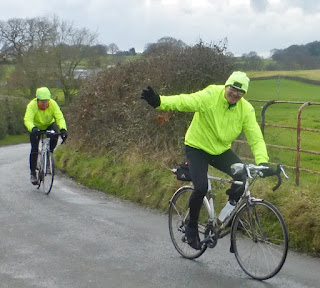 We were tucking in at Tilly's, when the fast group went past. We gave them a wave. Two minutes later Dave Pipe appeared, having decided he needed coffee and cake, and taken a u-turn! This gave us a laugh, because we had already predicted that he may well do this. From Bunbury we returned via Beeston. In time honoured fashion Steve and I put the pedal to the metal on the run in. No doubt Tanny had a gear or two in hand, but was being considerate to me. Brian was with Keith who had knackered his knee. Let's hope he's alright for next week. Thanks to Brian for the photographs. Thanks to all for their patience during my route befuddlements. 40 enjoyable miles, with two excellent sustenance stops, and good company.