Buoyed up by last week’s 100+ ride and further encouraged by Carol Kirkwood’s promise of a fine day I was enthusiastic to do another high mileage today. And so I set off to cycle to the Ice Cream Farm thinking that a ride from there in excess of 50 miles would get me past the 70 mark. As I was enjoying my pre-cycle snack I looked through some past routes and soon found one of 51 miles to Audlem. Ideal (or so I thought) and when I mentioned it to the others they were happy to go along with it.

As we were getting ready to leave we were pleased to see Dave P turn up and gave him a round of applause as we realised he was wearing his cycling gear. In recovery mode following his recent operation he was out for a little gentle exercise. He made the moderate group up to seven for the start of the ride, the others being Dave H, David M, Keith, Mike G, Steve T and myself.

We turned out of the Ice Cream Farm and set off cycling with Beeston Castle ahead of us. After passing the castle Dave P bid us farewell (Hope you are fit and well enough to do a full ride soon, Dave) leaving the rest of us to carry on across the A49 and on through Bunbury. Past Bunbury we turned left into Long Lane but instead of taking our usual right turn off it we carried on to the end. The problem with following a route straight out of the Garmin without a chance to study it beforehand is that you never quite know where it is going to take you. Unfortunately it deposited us on the sometimes busy Wrexham – Nantwich road and we had no choice but to turn on to it. Fortunately it wasn’t too busy and we got off it as soon as we could and headed down the much quieter Tally Ho Lane.

As we turned out of Tally Ho Lane I heard a pinging sound and I soon realised that my wheel was catching on the brakes. We stopped outside the Farmers Arms at Ravensmoor where we discovered that I had a broken spoke. David M produced a spoke key out of his bag and Dave H took charge of it. He seemed to know what he was doing and after a bit of jiggery-pokery (or should that be jiggery-spokery?) the wheel was straightened up, albeit still missing a spoke. I suggested that maybe I should turn for home but the others assured me that I would be ok carrying on, so carry on we did passing through Broomhall Green before reaching the Whitchurch Road for the final run in to Audlem.


Despite being a small town Audlem has two main features to recommend it, at least as far as our cycling group is concerned. The first is the number of eating establishments with no less than three good pubs and a cycle-friendly café to choose from. Our first choice is always a pub and since two of them are adjacent to the canal and likely to be busy during the summer holidays Dave H suggested the Lord Combermere. A good choice and the food was excellent and served in good time.
The second feature is a cycle shop and I am indebted to the good people at Audlem Cyclesport for fitting a new spoke while we had lunch. 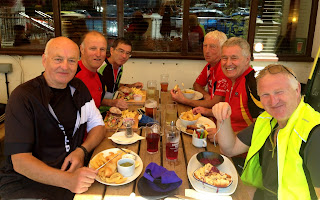 I was puzzled by the fact that we had only done 20 miles in reaching Audlem and wasn’t sure how we were going to achieve the other 31 on the way back. Another look at the Garmin and I realised that the 51 mile ride included my ride home. Mike came to the rescue by suggesting a loop around Audlem that would give us a few extra miles in the afternoon so instead of turning right back the way we had come we turned left and after leaving the town we turned right to make a pleasant loop through the countryside to the south of Audlem.

Then we headed back north re-joining my original route just before Aston and continued up to Wrenbury. After crossing the canal we turned left to throw in another loop. This took us through Bickley and round to the back of Cholmondeley Castle. We headed towards Bickerton and turned right down David M’s ‘secret’ lane. (Not much of a secret now, David, since we all know about it). A dash down the main road to the Bickerton Poacher then it was back through Peckforton to Beeston. David M left us here for his direct route home while the rest of us retraced our outward journey back to the Ice Cream Farm for a well-earned cake. Our loops had brought us back up to a 46-mile round trip. As for me, well I didn’t make 70 but 65 miles isn’t bad. Even more for Mike who cycled on to Shotton!