Our first CER ride of the New Year saw 8 members meeting at Ness Gardens with Clive, Bob and Steve H coming just for coffee and N Y-well wishing.  Macca had promised a Wirral ride covering some previously un-ridden “roads” by CER and in anticipation, Ivan, Mike G, Steve T, Tom and Macca set off north to Parkgate.  This ride should have been billed as “Edwardians at leisure” as we soon arrived at the site of the outdoor swim baths; today it was packed, not with human “bird watchers” but with RSPB members all staring out onto the Estuary, hoping to see for raptors hunting vermin escaping the very high tide. (see photo)


Onwards and eastwards brought us flying past Raby Mere, the site of Edwardian pleasure gardens, boating lake and tea-rooms up until the late 1960s, if my childhood memory serves me correctly.  Continuing through Mill Park, followed by Carlett Park, we arrived on the banks of the very high Mersey at our 3rd Edwardian playground – the long gone zoo, bear-pit and pleasure gardens at Eastham Ferry.  In bright winter sun, we headed north to the 21st century equivalent at Port Sunlight River Park, built on a 15 year old landfill dump and opened in 2014 (see photo 2). 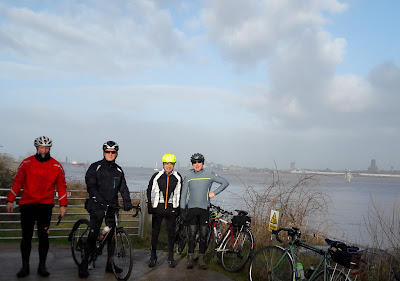 Hearing stomachs rumbling I called 15 minutes to the pub, at which the speed increased noticeably.  We cycled for the first time ever along the old Edwardian sandstone promenade at Rock Ferry, which usually has a 6 foot drop to the “beach”, where thousands came from Liverpool to sunbathe and swim.  Today, as you see from photo 3, we nearly had to swim ourselves. 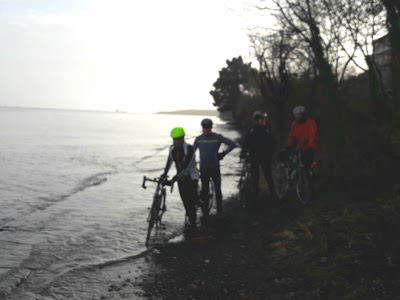 The Refreshment Rooms looked after us as well as ever.  Only open 5 years, it has gained from early-on a deserved reputation for serving excellent food as well as local beer, both locally sourced.  Its “Mission Statement” posted in the Gents, even declares that staff are locally sourced.
Though I had previously promised by e-mail a ride of 70 odd kms, the accurate BBC weather app I always use showed we were due 80 kms westerlies from 2pm.  After a hurried lunch, I elected for the shortest route back to Ness as we set off straight into that headwind. Bebington Station, Sunlight village, Clatterbridge, Brimstage, Raby, Willaston, then up and over Mill Lane took us back to Ness; we still covered an enjoyable 58 kms. (Well I still think of myself as European) at an average 18 kph.