It's a Hawarden start and its hot so, of course, the brisk riders are out in force for a hilly adventure.

Ivan took a day off from route planning and settled for my offering of a ride to the Three Pigeons Pub in Graig-fechan. The pub was slightly less than half way so there was some discussion about adding a few more miles, and 1000 feet of ascent! The fact that Clive clearly thought we were mad to be taking on the hill over Eyrys on a steaming hot day persuaded us that we didn’t need to add more hills to the route.

For once the brisk team outnumbered the moderates. With me were Ivan, Nick, John W and Paul. Off we went up through Ewloe and Buckley eventually emerging on to the A5118 near Padeswood and after a short run turning on to the B5444. Very shortly afterwards starts a four mile, 1000 ft climb up to Eyrys. The slope averages about 5% but (according to Strava) there are a couple of bits at around 19%. I decided to take it easy (not much choice really!) but the others seemed to take it all in their stride. We did however pause for a photograph at the top.

There were a few more less serious ups and down before the very fast 2.7 mile descent towards Llanbedr DC along the winding A494. Speeding down in glorious sunshine I recalled the last time I descended this with easy riders in pouring winter rain. Clive had warned us to take it easy and I did so heaving on my ineffective wet rim brakes. Sighing with relief at the bottom, making the slow right turn I found myself on my back sliding along the road with a car following a few yards behind! This time no such dramas as we gathered to consider why Nick's chain has a habit of throwing itself off the chain-ring at the most inappropriate times. He’s tried almost everything to fix it and the consensus was that it may need a link or two removed.

We join the B5429, enjoying the very pleasant views of the Clwydian Range that distract us from the fact that its a few uphill miles to Graig-fechan and the Three Pigeons Pub where we arrive at 12:15. I notice that the route continues uphill but we forget that for now as we settle for lunch in the shade of the verandah at the rear of pub. 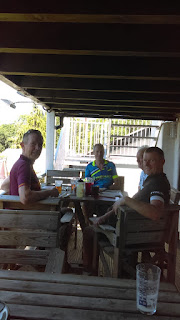 Its a well furnished, characterful pub with extremely pleasant staff and great beer. The menu contained a good range but some of the main courses looked a little expensive. Our choices were mainly soup of day and sandwiches but John W had the Farmers Lunch which was massive and probably enough for two. The conversation turned to youthful misdemeanours with one of our company admitting to once being locked up overnight in police cells. We also learned that it isn’t wise to go cold calling at John W’s house!

The temperature has soared higher as we set off from the pub. The road continues up hill on a stretch which I understand is known as “the mantlepiece”. Its an ascent of over 500 feet to the top a couple of miles away. Anyway Paul attacks it followed by the rest of us. A gentle incline follows for a few miles along the B5430 before a short climb into Llanarmon-yn-lal. I’ve already quaffed my water supply and call for a halt in the village to get a top up. However, the offer of ice cream is too tempting to resist so its Magnums all round plus a litre of water for me! What a picturesque location. Its a pity that the Raven Inn isn’t open during the day!

More bumps follow along the B5439 towards Graianrhyd. As a reward, we enjoy the luxury of a couple of long descents between Llanfynyd and Cefn-y Bedd on the B5101 and B5102. Then we motor along a flat run incorporating the traffic free and wooded Springwood Lane running parallel with the A483 which delivers us to the lower reaches of Marford Hill. Now diverting from the planned route we turn left heading to the roundabout. Nick had to return to Hawarden for his car and, escorted by Paul and Ivan, takes the B5102 left (big hill!) towards Hope and onward to Hawarden whilst John and I keep straight on for Chester via Pulford, Dodleston and over the Dee at Saltney.

The planned route was 43 miles. Nick rode 48 miles from Hawarden and back climbing 4000 feet. John W, Ivan and I completed well over 60 miles including our rides from home and back. Paul had done a circuit via Holt before the start and clocked up 88 miles. It’s worth noting that almost 3000 feet of climbing was done in a section of under 24 miles starting with the climb to Eyrys.

It’s a lovely route and one worth doing again albeit in cooler conditions. It was a great day out with excellent riding companions.