Another bumper turnout of CER members at Meadow Lea confirms the popularity of this starting point for our rides. This week, the mods were Steve Hu, Alan, Roy, Mike D, Peter, Andy B, Dave M, Dave H and yours truly. After the usual umming and aahing about where we should go, it was agreed that we should take a route originally devised by Dave H last year to….you’ve guessed it, The Bhurtpore at Aston. Since I had the route on my phone, I was nominated to be ride leader!

It was overcast with a few spots of rain as we set off, but at least it was warm, so cold weather gear  had been left at home. We set off past Ivan’s house to Vicars Cross and on through Christleton.  As usual, Dave M soon left us as he had other demands on his time. After crossing the canal, we also crossed the A41 to go into Rowton and then crossed back at the end of Rowton Lane, taking Moor Lane into Waverton. There we ran alongside the Shropshire Union canal heading for Beeston via Huxley, Brassey Green, crossing the canal at The Shady Oak.

After Beeston came Bunbury and then south to Haughton. This time we could not take Dave’s loop to Haughton Hall, as the road was closed. At Gradeley Green we turned east on Spring Lane, crossing the Shropshire and Union canal at Swanley before heading south for Ravensmoor and Sound. At Wrenbury we take Station Road, which has to be one of the roughest, most potholed roads in Cheshire, before reaching The Bhurtpore in Aston about 1 pm.

The usual slick operation at The Bhurtpore was missing today, confusion arising about whether we should order drinks inside and food outside and whether we could order together but pay individually. The food also took a while to arrive, but this gave us time to admire Roy’s vintage Brian Rourke bike which is almost as old as our younger members! 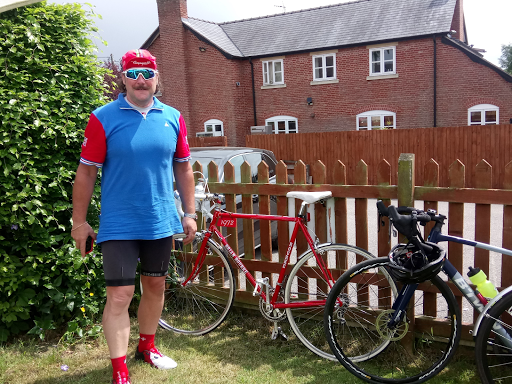 The sun had come out and the weather was perfect for cycling as we set off for home. Our progress was halted at Wrenbury Station by two trains which had the grand total of hree passengers between them. Our route back took us via Chorley Bank, Chorley and Larden Green. Just north of Brindley I missed the turning off Cappers Lane and had to drag everyone back a couple of hundred yards. Peter decided that he preferred the other road, so we lost him for a while, catching up with us as we reached Peckforton Hall Lane.

From here, the route via Beeston was fairly straightforward, but there were some mutterings at the back about a coffee stop. Options were limited as it was almost four o’clock by now and the Ice Cream Farm was heaving, it being half-term and all that. At the cross-roads between Newton Lane and Tattenhall Road, Red Lane had ‘Road Closed’ signs and bollards blocking the way. At this point, Peter and Andy decided to head for home another way while a motorist got out to move the bollards to one side, so that he could get his car through. For some reason, he didn’t seem to appreciate the ‘thank you’ he got from the cyclists as we nipped through the gap! As we reached the bridge by the marina we were confronted by several trucks and a tarmac laying machine. Initally, a jobsworth said that we’d have to turn back, but eventually we negotiated to walk the bikes past the roadworks.

After that it really was plain sailing. Roy left us at Greenlooms, as he was off to take part in a 10 mile time trial – the ride with us had obviously been a ‘warm up’! At Waverton, Steve Hu left us for home, so that left four Easy Riders to thread our way across the A54 back to Mickle Trafford and the now-closed coffee shop. If only they’d stay open till five!