I have just lost my full write-up on this computer, so please accept this far briefer account.

It was a pleasant surprise to see Bob, and also Keith at Alison's. Our wholehearted best wishes go to them both.  The moderate group consisted of Mike Gilbert, Mike Dodd, Steve Hughes, Steve Tan, George, Alan, Dave Matthews and myself. Our route out was via Carden, Tilston and Malpas. On turning south for Higher Wyche and Iscoyd Park, we became aware that Dave Matthews was not with us. Waiting, and attempted phone communication failed to reunite us. As we had also ignored a 'Road Closed' sign there was every chance that Steve Hughes' willingness to ride back to find Dave would have been a fruitless task. The rest of the route took in some of our favourite, sunny Shropshire lanes. 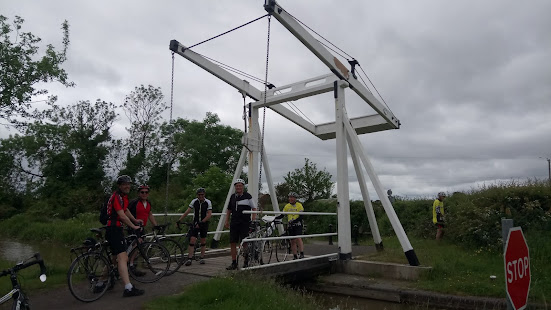 We headed west from Dobson's Bridge to Northwood, Lyneal and Colemere. Out of expediency, we then gave the back route past pretty White Mere a miss, in order to arrive by main road at the Red Lion on time. On our way in we were surprised to catch a glimpse of Dave Matthews at The Kiosk on the lake side of the road having lunch! It turned out that he had taken the direct, main Whitchurch Road in order to catch up, and  couldn't find us at The Red Lion, so had headed for his favourite Ellesmere venue. We ate outside at the back of the pub. The food and service were very good. Dave popped in, and then went his own way home. On Friday, I rang Dave to apologise. Lessons have been learnt, and it won't happen again. The route back was by the pleasant lane up from the north-west end of The Mere, past Haughton Farm. The warm breeze wafted us back to Tattenhall by way of Penley, Holly Bush, Mulsford, Worthenbury, Shocklach, Tilston, Barton and Chowley. Unfortunately, we were a bit too late for a coffee at Coddington. Just over 46 miles in fine weather and good company.