On what was arguably the hottest day of the year so far a number of intrepid CER riders met at Ness Gardens Cafe. The group consisted of Elwyn, Fiona, Neil, Dave M, Steve Ha, Steve T, Steve Hu, Alan, Roy, Andy B and George.

Elwyn, Fiona, Dave M, Neil and Steve Ha had all ridden from their respective dwellings having covered 25/30 miles already, so this group set off for home via different routes.

This left the hard core of George, Steves T & Hu, Roy, Alan and Andy. Alan had a route around the Wirral however this involved extensive use of the Wirral way and the thought of stone chips on Steve’s Hu new bike left him apoplectic with worry. However even in his absence Clive saved the day (thank you Clive). Steve Hu had recorded the 12th March 2020 ride when Clive navigated us around the Wirral on a day of stinging wind and high tides. Today there was no wind, or breeze just 26 to 30 deg C wall to wall sun.

The group left Ness returning to the coastal path past Nets and on towards Parkgate. Some nifty turns and a short stretch on the Wirral Way had us cruising through Lower Heswall and onto Ireby. A strange sound emanating from Andy’s bike turned out to be a nasty puncture which had damaged his tyre. Despite wacky suggestions to insert £10 notes into the tyre between the case and the tube we were left with an Egg bulge on the tyre. Quick thinking and internet browsing by Alan tracked down a bike shop in Moreton for a new tyre. Once replete with fresh water, a new tyre and having found a £10 in his tyre Andy was good to go at full speed. I just wonder if the 145 mile Audax he did in Suffolk last Saturday had worn his tyre too much. 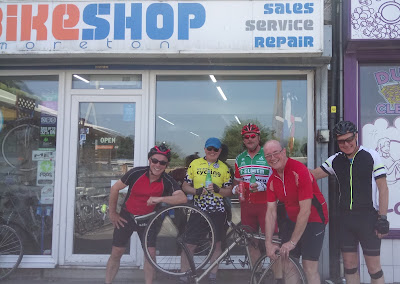 Onwards to the Sunshine Cafe at New Brighton, open, quiet, but unfortunately no shade, so back to plan B, Wetherspoons. Despite testing the linguistic skills of the bar man George managed to order two meals in a pure Geodie accent. Possibly as a result of the translation required, Andy's and George's meals were last to arrive.

Again fully replete the team of six set off along the New Brighton coastline weaving along opposite the Liverpool City backdrop complete with cruise liner in dock. Then followed the endless turns to take us through Woodside, Birkenhead, Rock Ferry and ultimately Eastham. Another refreshments stop here where the peloton fueled up on Ice Creams and soft drinks. From Eastham it was a short jaunt through Willaston back to Ness Gardens.

Just under 40 miles on a very warm day with super company.