A forecast of strong southerly winds and an afternoon of heavy rain affected attendees at Cleopatra’s in Holt.  Neil had planned a ride, but dangerous side winds on his route to Holt had dissuaded him.  Dave M and Andy W were only out for the morning.  Others were present in civies, namely Elwyn and Fiona.  If I’ve missed anyone, apologies, but as part of our group were inside and part outside, I wasn’t too clear who was present.  The result was a party of six out for the club ride: Clive, Andy B, Dave H, Steve Hu, Alan and myself.

In the absence of other proposals, I picked a fairly short route off ViewRanger, the destination being The Greyhound at St Martin’s. We took the lanes to the west of the River Dee, or Afon Dyfrdwy I should say as we were in Wales. We were fairly sheltered from the wind for most of our way. Somewhere around Roden’s Hall we came up behind a largeish herd of heifers being driven along the road – the kind of thing you expect in the countryside. Without too much success we tried to avoid the cow plops they left in their wake. They continued their progress after we met the B-road and were still marching onwards when we left them for the lanes at Talwrn. We must have been behind them for a couple of miles, but there was no sign that they were heading for a nearby field.  They certainly reduced our average speed. 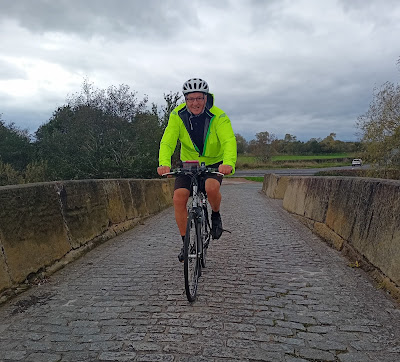 At the A-road we dropped down the hill and across the old bridge into Bangor-on-Dee (Bangor-is-y-coed). From here we took the main road to Overton (Owrtyn), and then the main road to St Martin’s (St Martin’s), turning off at Shell Brook onto small lanes to Dudleston Church. Next it was a short distance to re-join the main road and follow it to The Greyhound.

It was mild and sheltered outside the pub, so we eventually decided to sit there, especially in the covered area to protect us from the expected rain.  A warm welcome was offered and a wide menu, but most of us went to the small fish and chips, except for Steve Hu who chose the standard size and received a whale of a fish!

Some rain had started to fall by the time we had to leave.  We turned right out of the pub, then stopped and turned around, then stopped again and turned back.  Our navigator was having problems with directions!  Eventually we worked out the right route and headed towards Dudleston Heath (Criftins), from where we took to lanes heading north eastwards with the wind behind us. We travelled on through Holly Bush. During our return Dave H (who seems to operate a permanent helpline for his family’s car problems) spent a lot of time on his phone.  Eventually, after waiting for him to appear, we left him behind on the understanding that he would meet us back at Holt. We followed the simple route back via Worthenbury, Shocklach and Farndon, to find Dave somehow already seated in Cleopatra’s waiting for us - puzzling.

The afternoon rain had been intermittent rather than heavy and we enjoyed a satisfying 35 miles.  We reminded ourselves that by next week the clocks would have changed and we would be ending our rides in encroaching darkness.