There was a good turnout again at The Gallery Coffee Shop, comprising 4 briskers, 8 mods and three just doing their own thing.  The mods were Steves Ha & T, Alan, Roy, George, Daves H & P and Liz. Although Spiros had set tables apart and had put up some screens, I’m not sure that we were exactly abiding by the ‘rule of six’ still in force in Wales. So, there was some apprehension when a couple of Wales’s finest Heddlu came in, but it turned that they’d just come in for a coffee too!

After some discussion of where to go it was decided to use a previous route I have to go up in the hills to The Piccadilly at Caerwys, a place we haven’t visited for some time now. This was the plan….

All went well to begin with as we went into Ewloe and climbed up to Buckley, after which we went down through Bryn-y-Baal and New Brighton to Sychdyn. As we were riding along, George told me that he’d been out walking the day before and that the lanes around Mynachlog were very muddy and slippy. So, we decided to re-route to avoid them, turning down the hill at Wat’s Dyke into Northop. Here we picked up the road past the horticultural college which runs parallel to the A55. At the roundabout for the services, we joined the A55 for the 200-yard dash to the Halkyn exit.

Climbing up the hill to The Britannia pub, we had the choice of continuing straight up the steep hill to the B5123 or following the less steep Pen Lan Lane to its junction with the B5123…which is what we did. We’re called the ‘mods’ for a good reason! We were now ‘off piste’ and needed to get back on our planned route.

Doubling back towards Rhosesmor, we took the right turn off the B5123 and followed the road over the Halkyn Mountain to Rhes-y-cae, where we re-joined the planned route. Now back on familiar roads we passed through Lixwm heading towards Babell, climbing still further as we did so. We then had another ‘off piste’ moment, when I missed the little lane up to Pant and we continued through Babell and down what became a narrow and muddy lane running directly to Caerwys.

At this point, Alan, Steve H and myself were a little ahead of the others, but we were not worried as George was with them and this is his backyard. However, it was quite a few minutes after we’d arrived at the pub before they turned up. It transpired that Roy had suffered a puncture about a mile away – hence the delay.

The Piccadilly had put us on two adjacent tables in their Dining Room, which in the end we had to ourselves. Food was ordered using their complex ‘tick box’ menu, but it arrived quite quickly and was of good quality and in large portions.

Leaving the pub at about 2.15, we took the lane round the back of The Piccadilly, heading towards the A55. But less than a mile along here, I picked up a puncture in my front wheel. Roy and Alan whipped the wheel off and Roy had the inner tube out before I could get my tyre levers out! He found the offending thorn with his finger (ouch!) and set about removing it. It turned out to be really well stuck in and it resisted the combined efforts of Roy, Dave H and Dave P for twenty minutes until it had been bludgeoned into a blunt, frayed and benign version of its former self.

With the puncture repaired, but about half an hour lost, we reached Pen-y-cefn, where we decided that time was pressing on and to miss out the loop to Whitford and Gorsedd and head back through Babell to Pentre Halkyn, where we picked up our intended route once again.

From here we took the usual route over Windmill to Halkyn and then down the infamous Middle Mill Road to Northop, where George took his leave. From there the B5125 took us past Northop Hall to Ewloe, where Roy waited for his lift and the rest of us continued back to the car park at Hawarden. 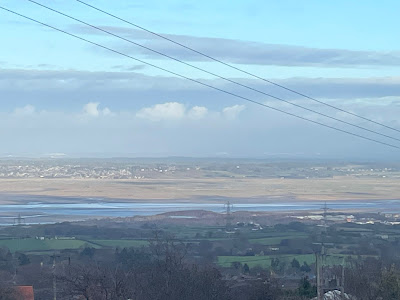 36 miles covered and 2540 feet climbed on a bright, sunny day with only light winds. Our legs were tired from our first venture into the Welsh hills for some time, but it was worth it. Thanks go to Roy and Daves H & P for fixing my puncture, to George and Alan for navigational aids and to everyone else for their company.