The brisk riders were definitely a minority at Delamere Station Cafe. Ray and John were bolstered by the welcome return of Colin but other regular briskers were unavailable. Ray was recovering from his 200k Audax ride a couple of days earlier and had in advance signalled his desire for a shortish ride. So it was that we readily agreed to his suggested 40 mile loop with a couple of options for lunch or coffee. The other selling point was that if all went to plan we would mostly avoid the predicted southerly headwind.

In summary the route took in Norley, Weaverham, Anderton, Comberbatch, Lower Stretton, Hatton, Daresbury, Sutton Weaver, Frodsham and Helsby.
We briefly flirted with stopping at Anderton Boat Lift cafe but had hardly warmed up so pressed on to the swanky looking  "Fox" at Lower Stretton. We were made welcome and really enjoyed our light lunch consisting of toasted sourdough sandwiches and chips. Service was a bit slow so we had plenty of time to discuss the “special operations” in Ukraine which put in to perspective our worries about the plight of Everton FC (all three of us being followers 🙁)
Our return took in a few short stretches of gravel including a run alongside the Bridgewater Canal and a couple of diversions off the main road in Frodsham before emerging at Helsby to begin a climb up to Alvanley.  A bit further on Ray and I turned off the route to return to Chester via Manley whilst Colin headed for his home at Mouldsworth. 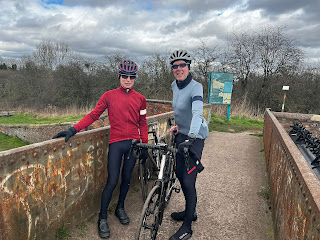 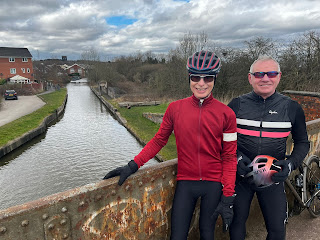 As mentioned the route was 40 miles from and back to Delamere. Ray and I did 56 including our return ride to Chester. Not so short then but done at an enjoyable intermediate pace for the most avoiding  a headwind.  Clive may recognise the route as one of his and certainly the canal section and other enjoyable twists and turns were recognisable as his sort of thing! We had a fun day on roads not visited for a while which added to the enjoyment.
See route map and/or gpx file download
JM
Photo on Bridgewater Canal J&C
Posted by Clive at 14:33