Gorgeous day to gather at Alison’s and clearly a common thought,  as there were at least 15 club members looking forward to a spin.

This week, there were plenty of route ideas, with DH deciding to abstain from the selection process- Lol. After a few discussion, it was discovered that Fiona, Elwyn, Andy, Steve & Alan fancied a route that I offered up to the Acorn cafe, at Commonwood fisheries, as the return leg was via Holt.

This meant they could all bail out early for home, although Steve & Alan ended up returning to Alison’s with me, despite parking their car in Holt, which also had another irony, more of that later- Lol.

This meant that I didn’t end up returning to the start venue with nobody in tow-Lol.

We set off, right out of Alison in order to mix it up a bit, as I headed toward Burwardsley, but turned right down a little unknown lane to most (known to Paula & I as ‘ wild garlic lane’, as we often pick it on our local walks). The right turn was to take us across to Harthill, although we were hanging another right off Harthill (where we caught up with DH in the other group, but he didn’t hear me shout “ have a good one”, just as we turned right- Lol)

We were taking the easy way around Harthill in order to head up through Brown Knowl and on toward a favourite set of lanes that lead across to the Tilston/ Malpas road. However, we simply chink left and right within 200 metres in order to get across to Threapwood and on to Shocklach, which was the only crappy bit of road on our journey and a small price to pay for an otherwise enjoyable meander, so say the others- Lol.

After a brief discussion with Fiona about what ‘going straight on’, at Shocklach means, we turn right- Lol and head toward Tilston, where I throw in another impromptu loop, up through CardenPark, for a photo opportunity at Stretton Mill. Unfortunately, as you can see from the pic, there was virtually no water flowing over the weir, which did nothing for the photo shoot- Lol. So group pic done, we set off again and head down Wetreins lane to my favourite set of ‘S’ bends, where, I might add, Fiona got a ‘Legend’ award on Strava- Lol. Before we knew it we were at the road junction to Farndon getting close to our destination of Acorn cafe, with our first encounter with Holt and one of 4 encounters for Alan & Steve- Lol.

Once past Belliss’s strawberry fields, on route to Borras, we take a small lane left in order to bring us around to the Acorn cafe. However, after causing Steve to salivate over the prospect of a gorgeous Halloumi burger or wrap, we arrive to discover the chef has not turned up and hot food is off- Lol. Suffice it to say, Steve did not forget this fact, once at our alternative cafe stop of Cleopatra’s- Lol.

All suitably fed and watered, both Steve and Alan decide to complete the route to Alison’s, despite the fact that their car was parked only 50 mtrs away from Cleopatra’s hence, this was their 3rd visit of 4 to Holt, for the day-Lol.

We leave Andy, Fiona & Elwyn to make their own way home. Unusually for Andy,  he decided he would have a much shorter than usual ride for a CER gathering. Fiona had a bit of a sore throat, so didn’t want to risk a much longer ride, especially as they were due to go on a cycling holiday to Majorca on Saturday.

We three set off for Aldford via the little hamlets on route, where I throw in another little detour to point out a gorgeous little house with the most unusual detailing on the exterior walls, although this had to be pointed out after the initial distraction of at least 100 gnomes and or various animal figures on the newly mown lawn. 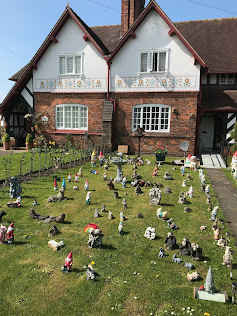 Photo NT
This prompted a few chuckles about the effort required to move all those figures each time the grass was mown. We turn right to Bruera, after Aldford bridge ( where I point out some of the repairs after last years floods).

We now hit some light headwinds, all the way to Tattenhall, although the lovely smooth tarmac of Platt’s Lane made it seem easy and we were soon crossing the A41 for the back road into Tattenhall.

At this point, while still feeling a headwind,  I try to explain to Steve, with Alan listening on, my favourite route to Holt from Tattenhall. This entails a slight climb up to Carden Park. Beyond that is Stretton Mill, for their 2nd time and of course beyond that is Holt,  for their 4th! and final time of the day- Lol.

However, memory is not a strong characteristic of Steve’s, it appears, as he puts the onus on Alan to remember the route. Suffice it to say, we had to pull up near Alison’s to explain again, the way back to Holt- Lol. I point out that I only live a mile down Frog lane and leave them to go their way.

I got home with only 43 miles on the clock and much shorter than my usual CER rides. Both Steve & Alan, I guess, might have got a Grand Fondo out of their day (well done guy’s)

Lovely day out, despite the disappointment of the Acorn cafe.