George, Alan and I had witnessed the brutal nature of the wind en-route to the cafe, as had Roy. Clive arrived looking like a scuba diver, he was that wet. Undaunted however, the group managed to present three different routes for the day.

Alans option to visit the Bluebell Cafe in Great Barrow was chosen as it combined a new venue with an opportunity for an early dart for a couple of folk.

So, suitably attired and probably wishing we had invested in a sail, we left the warmth of Ness Gardens towards Ness. We skirted Ness and took the quiet lanes to Raby and on to Willaston Mills. At this time the riders believed they had woken up with “Chris Froome” legs as progress was effortless as we whizzed down to Ledsham & Capenhurst. The tail wind was not ready to show its more challenging side.

Due to the tail wind we were whizzing past Manley Mere and onto our lunch stop the Blue Bell well ahead of our planned time.

This is a super venue, part of the Barrowmore Estate. Formerly a TB hospital and nursing home. Since 1983 it now provides supportive accommodation for vulnerable people. Set in 85 acres of parkland it is a super place to visit.

The staff at the Bluebell welcomed us in, and an excellent array of food was forthcoming.

Alas, as the teas and coffees cooled in our stomachs the return to rain and wind called. The route now took us north through Little Barrow into the teeth of the wind. Steve T bade farewell at this point to attend a family occasion. The route then wound its way in and out of the wind to the Chester Greenway where Clive set off back home.

The remaining sextet plodded down the Greenway with a healthy amount of headwind. A brief stop at Bren Bikes revealed that this charity, which receives and repairs bicycles for sale, is very busy. Last year alone they received over 900 bikes as donations and sold over 700.

By this time the peloton of Dave, Roy, Keith & George had set off and was not in sight. So, raising his game, ride leader Alan turned into a domestique and dragged me all the way to Garden City where we “nearly “ caught up the peloton. 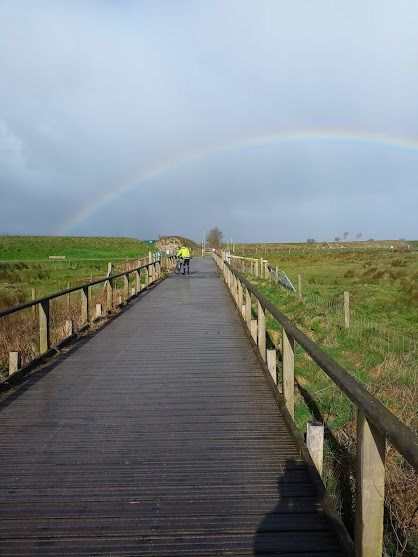 A quick series of diversions to avoid the greenway civil projects found the group at Toyota where Steve Hu, Alan and George turned for the motherland and the intrepid three of Keith, Roy & Dave H soldiered on to brave the Burton Marsh Wind tunnel.

A great 39 mile ride on a day (if not for the club) I would not have ridden.

Thanks to Alan for the route and Clive and Dave for having back up options as well.