A lovely looking day ahead with approximately 9 CER riders massing at Rose Farm, less than usual, but this was due to several still being stuck in traffic due to the M56 being closed, which in turn caused havoc on the surrounding roads it seems.

2 routes offered by Steve H and I, but mine was a shorter climbing ride, so only a couple interested in that one, even though relatively easy. So, I set off with Alan & Steve in tow, heading for Manley Mere, on the lovely and apparently man made Mere (according to Alan). Steve H was taking the rest of the Mods East. Ivan & John were the fast group today.

We set off left in the same direction as the other Mod group, but continued to Tarporley, in order to hang a left toward Eaton. My planned route would take us up the east side of the Sandstone ridge via Oulton Park race track and through Little Budworth country park, before heading through the more mundane stretch up through Sandiway, but not before we bump into Jim, coming out of a little lane we were heading into. He had decided to do his own thing today.

I must say that the Whitegate Way (previous blog route) is a much better way of getting through the area of Sandiway and a few bumpy lanes leading to it. Our route today did in fact take us past the exit of said Whitegate Way, which nobody would have noticed but for Steve delighting in pointing out and reminding our little group of how I missed the turning last time out- Lol. It was not long after this that Alan had to stop to tighten up his handlebars and put a wind proof on, as the poor lad was feeling chilly. Both me and Steve suggested he got on the front and warmed up the pace- Lol.

No sooner had we got going again when we entered the lovely Gallowsclough Lane, which is a real favourite of mine. This also meant the route got more interesting from there on, with a few lovely lanes to climb, in order to get over the Sandstone ridge again. This in turn enabled a few cracking views over the Cheshire flats. It was one of those views that allowed me to point out where Alan lived (far off in the distance of Flint, with Liverpool just coming into view, to our right - Alan often doesn’t know where he is, so I thought I had better point out where he lived- Lol). Now cruising along the top of the ridge, we soon turn right down toward Manley Mere and the somewhat bumpy lane that leads to the entrance. 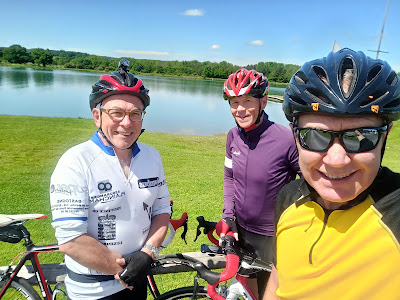 Steve had not been to MM before. I believe he was reasonably impressed. I still don’t think he needed to chain all 3 bikes together, when we sat only 10 feet away from the bikes. He could moor the Queen Mary with hawser cable he carries- Lol (apparently he’s a touch protective of his bike and rumour has it, he carries all his worldly possessions in that waist pouch of his- Lol). We coincidently went for the same Falafel wraps, which I reckon was a deconstructed falafel- Lol, as there were whole chickpeas and not the usual falafel balls inside the wrap, which clearly added to the overall flavour. We all thought they were delish! With a mango chutney on the side. Very quick service left little time for conversation, which didn’t stop Steve of course (by no means am I suggesting he can talk- Lol!).

After briefly telling Steve that MM used to be a ride venue for CER, some years back and well before I joined the club, we fill up our water bottles from the stand pipe and set off down some of my favourite bits. We were now heading toward Ashton and a rendezvous with a new lane that I have only ridden once before. Grange Road, is in fact, a little farm lane but good tarmac and no potholes, although it has a fair bit of debris/gravel. That said, it is lovely easy 1 mile climb and bypasses the usual main B-road past Mouldsworth (wouldn’t go down it in winter though- Lol).

At this stage somebody mentioned that we weren’t that far from Rose Farm, to which I answered, “we are taking the flatter long route”, which meant we would bypass the 17% blip within the long-ish climb of Yeld Lane, but not before I detour to the bottom of said Lane, Lol. This was in order to show the guy’s where ‘Kelsall Bike Repair’ had moved to. For those who are not aware by the way. I was chatting to the owner and he already has plans to expand upstairs, leaving down stairs to become a much bigger and proper cafe. At the moment they only do coffee & cake, although good, however, a lot better than the old premises, with tables inside. He had a couple of good looking carbon bike bargains when I was there last week (rim brakes of course, but got me thinking, as I really fancied the Trek- Lol)

This place has the potential to become a real geekie bikers cafe, not unlike the recently closed Eureka cafe, at Two Mills (Wirral). It’s so well positioned now and also right on top of the 1 mile gravel track into the back of Delamere Forest cafe, which I pointed out to Alan, as it is the only short cut alternative route to Delamere Station cafe and easily rideable on road tyres. I suggested it would save a lot of miles for the likes of Alan, Steve and Andy from Mold (not that Andy would want a short cut and I’m not so sure Alan or Steve would ride to Delamere from home either- so bit of a mute point- Lol.)

Anyway, back on route to Kelsall and the likeable easy climb up through the centre to Quarry Lane, which literally took us on a near circular loop around Yeld Lane. We descend Quarry Lane and on past the bottom of Chapel Hill, which I said earlier we would descend, but I got carried away when turning down Quarry Lane Lol. So an unplanned minor detour led us on to Oscroft and around the back of Okells Garden Centre, which neither Steve or Alan had heard of before (best garden centre / cafe / gift shop etc in the land, but expensive). Anyway, only another 2 miles to the bottom of Wood Lane and I leave my companions for the day, to find their own way up the last mile or so to Rose Farm.

10 miles home for me and I get there with 99.2k on the clock. No ‘Grand Fondo’ for me, can you believe-Lol. Steve and Alan should have completed 40 miles or maybe 45, if I put them on the wrong road- Lol. Great day again and good company, all jokes aside.