When the Easy Riders met at Rose Farm Café, the main topic of our conversation was traffic. The M56 had been closed which had clogged up all surrounding roads, and hence many members had great difficulty getting to our start point on time. We subsequently found out that the police had closed the motorway in the early hours because of a person standing on a motorway bridge intent on doing away with themselves. Dave H & Steve T were particularly affected and weren’t able to get to Rose Farm, so we arranged to meet them at the Station Café on the Whitegate Way.

Three rides left Rose Farm: one brisk and two mods.  I was leading one of the mod rides to Mow Cop and the Rising Sun at Scholar Green.  Although we had often ridden to this destination, I couldn’t remember us ever riding up to the folly itself atop the gritstone outcrop, so this was to be our aim. The group consisted of myself, Trevor, Andy B, Peter, Jim, and Steve T and Dave H who we would pick up on the way.

Just as we were about to leave, the gate from Rose Farm was shut, and we waited while their donkeys were led through from one side to the other. They seemed to have been receiving the attentions of a farrier, and I discovered that sometimes donkeys do wear shoes. Jim was only joining us for the initial miles, but it was good to ride out and chat with him. We were reminiscing and saying that CER had hardly ever had any real problems on our rides – perhaps this was an omen of what was to come. We rode out through Cotebrook and past Oulton Park to meet the Whitegate Way at Marton Green. In the station café we found Dave and Steve, who had just ordered coffee and food, expecting us to arrive much later. Is it an Easy Rider tradition that a ride can’t start until every member has refreshed themselves in the café?

Soon we moved on along the Whitegate Way, which deposited us just outside Winsford.  Then it was through the town and on to Middlewich, emerging now onto quieter rural lanes. At some point I called the pub to book us in for lunch.  They asked us to arrive at 1:15pm which meant we would have to ride up to Mow Cop after we had eaten. Passing through Brereton Green and Spen Green, we arrived roughly on time, and ordered our food. We’ve stopped here a number of times over the years and always enjoyed it.  This time the food and welcome were equally good, although the landlord told us he was retiring, so we will not be sure what to expect when we visit again.

My plan was to cycle up to the Mow Cop folly on the least steep route. Somewhat leadenly after our meal, we began the long slow winding climb up to Mount Pleasant and then Mow Cop Road, before turning left to pass the chapel and finally arrive at the National Trust car park. Not surprisingly, our party got well spread out coming up the hill, and a bit of rounding up was needed to get everyone to the right place. Mow Cop is the southernmost outcrop of hard sandstone grit in Cheshire, rising 355m above sea level. At its highest point stands a mock tower that was built as a summer house in 1754 by Randle Wilbraham, the local Lord of the Manor. 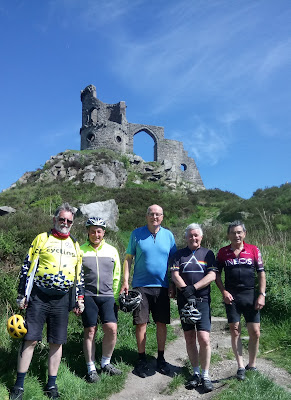 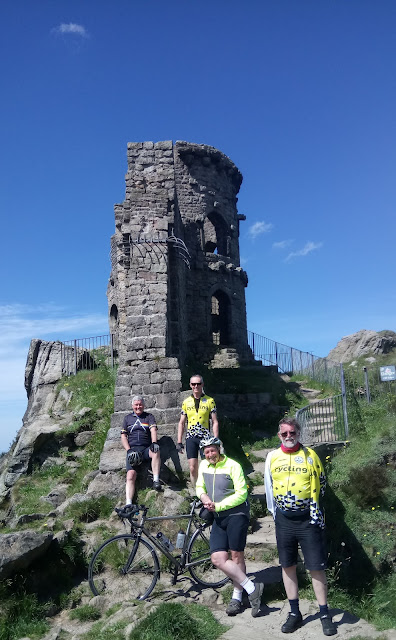 It was a beautiful day and the views from the top were extensive, if a little hazy in the far distance.  We picked out Liverpool Cathedral and Moel Famau to the west, and the White Peak to the east. 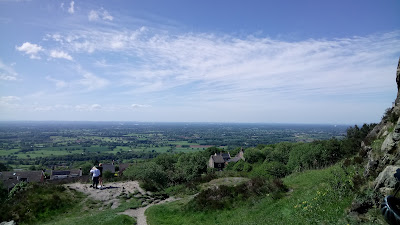 Our return took us through Alsager to Wheelock Heath, and it was here that a shout came from Dave H that his freewheel was broken.  The pedals turned, the chain moved and the cassette spun, but his rear wheel remained static. As we gathered to inspect the damage, a lady in the house opposite said we could use her drive to attempt a repair.  Dave had an idea to use cable ties to fix his cassette to the spokes of his wheel and drive it forwards that way.  This was received with some scepticism, but he persevered while others of us helped our host get her lawn mower running again. Bike bodge completed, Dave took to the tarmac for a dozen yards, before admitting defeat. Our plan now had to be to abandon Dave and continue our ride. Steve T could then get back to Whitegate Station café and return in the Berlingo to rescue Dave.

So, we continued, north-westwards over an appalling surface as we passed under a railway line, and then entered the outskirts of Crewe from the north.  By now time had advanced and we were well into the rush hour.  We passed by Leighton Hospital, and took the road to Church Minshull. Here Steve T left us to head through Winsford and return to pick up Dave’s car.  The rest of us made for Wettenhall and Eaton, to cross the Tarporley by-pass near the Portal Golf Course, and then head back to our start. Andy, Trevor and Peter took the road to Duddon and on to their homes, while I returned to Rose Farm, where I noted two things: first, we had completed 58 miles, secondly, that despite it being 6:30pm, the gate to Rose Farm was still open. Previously this had always been locked between 5:30 and 6:00.  Maybe this was a one off, or maybe as more enterprises are now operating from the site, they leave it open for longer – useful to know if you intend parking there.

I rode on back to Kelsall reflecting on an excellent day’s cycling in great weather marred unfortunately by Dave’s mechanical problems.

PS. Steve T successfully rescued Dave, who it turns out hadn’t had such a bad time after all. He had made his way to the Forester’s Arms and found it to be a traditional friendly community pub with plenty of people to chat with.