A fine dry day had encouraged a reasonably good turn out of riders at the Gallery Tea Shop in Hawarden, despite the prospect of some Welsh hills to climb.  Brian Mac and Trevor were only there for the tea and tea cakes as they had other calls on their time.  The “brisk” group was much depleted in numbers today but Ivan had a plan to visit a Thai restaurant in Bodelwyddan, I think that was what he said, and he and Tom went searching for said restaurant.  That left eight of us: Dave H, Keith, Steve T, Dave and Liz P, on their trusty tandem, Jim, Steve H and yours truly.
I had come up with a route to get us to the Eagle and Child at Gwaenysgor with the aim of avoiding that horrible stretch of the A55 just west of Northop that has to be my least favourite bit of road.  So setting a very steady pace, as I knew what climbs lay ahead, we made our way through Northop Hall to cross over the A55 and into Northop.  Here I diverted from our usual route past the college and turned left up the Green.  We began a long, occasionally demanding, climb through the lanes to get up to Rhosesmor.  Crossing the B5123 we continued to climb and were treated to some fine views of the Clwydian Hills, to our left, as we gained the top of Halkyn Mountain.  With the climbing over for a short time we flew down the long decent into Rhes-y-cae.  A pleasant change, as we usually have to climb up this big ascent much later in the day.  However, hills are not absent for long in North Wales and two further steady climbs brought us to the Pentre Halkyn to Babell road.  This is one of my favourite rides on this my home turf.  Heading west along the top of the ridge on a good surface, virtually traffic free, we were treated to some spectacular views.  The Vale of Clwyd was laid out before us, rising behind were the Denbigh Moors and behind those the mountains of Snowdonia were clearly visible in the sunlight. 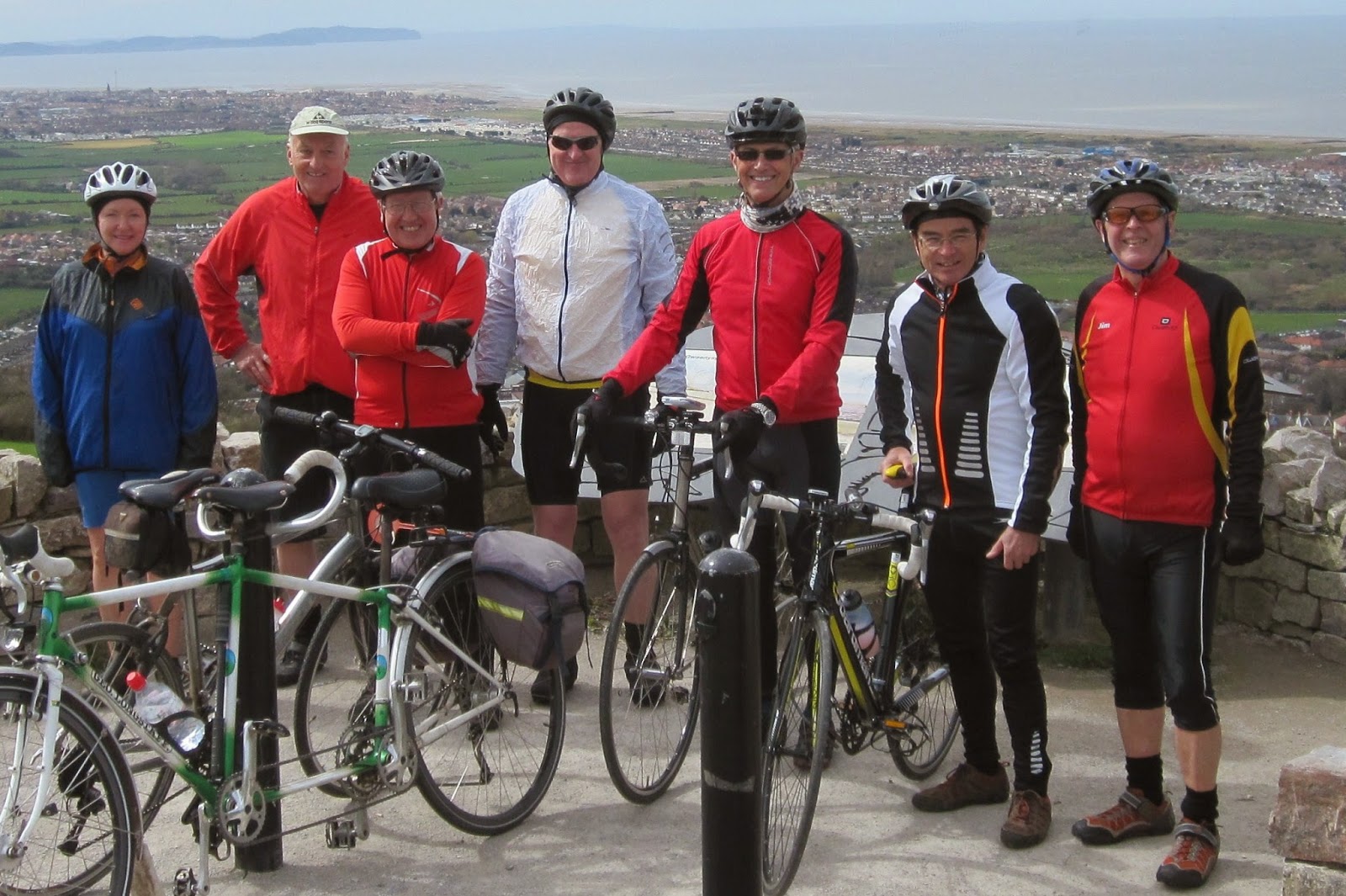 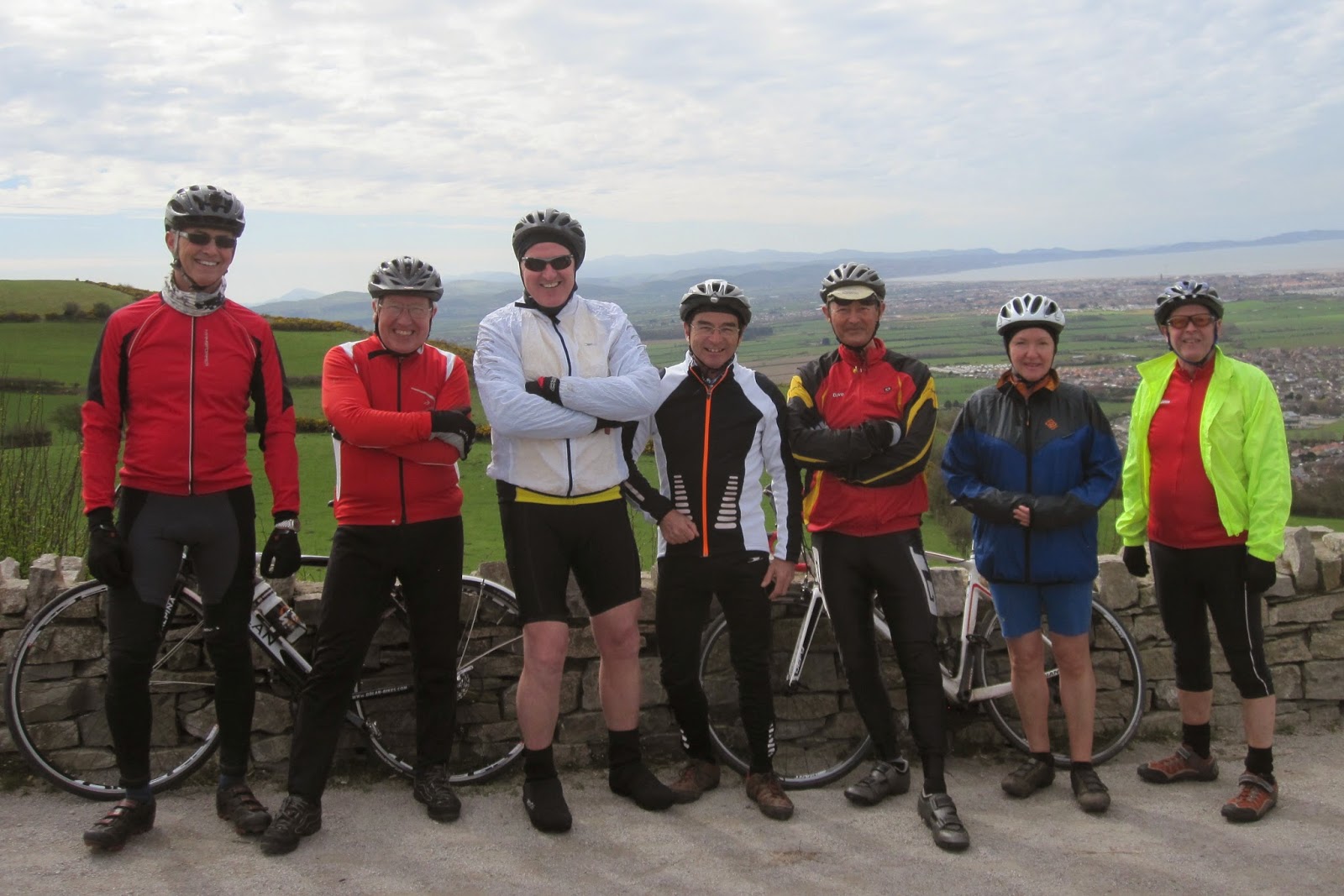 Turning north we crossed the A55 at the top of Rhuallt Hill and followed a newly resurfaced lane northwest towards Dyserth.  I was anxious not to lose all our height gained by dropping all the way down to Dyserth and studying the OS map, the previous evening, I had identified a lane which would save us height but which was new to me.  Although little used, the lane proved perfectly serviceable, I am sure the recent dry spell had helped, and we turned right onto the A5151 for about 100 yards before turning north again onto the minor road to Gwaenysgor.
We were soon settled in our usual corner of the bar.  The landlord was as ever friendly and efficient.  As we awaited our food we were entertained by Keith who demonstrated for us the finer points of speed dating.  Some of our members lead such interesting lives!  Suitably replenished we called at the neighbouring viewing point to take in the panoramic views up and down the coast and the ever-multiplying wind farms out in the bay.  Leaving the village we turned left for a gentle leg stretching few miles to Llanasa, where we picked up National Cycle Route 5 and started the series of steady climbs, through Whitford and Pantasaph to get back onto the ridge at Brynford.  One more steady climb brought us on to the summit of Halkyn Mountain.  Here we could let the bike take the strain as we rolled down the B5123 back to Rhosesmor and retraced our outward journey via Northop to return to Hawarden.  45 satisfying miles on a fine dry day in some lovely countryside.
GW
Posted by Gudfadirin at 20:35