The TV weather forecast promised “improvement throughout the day” as I set off with rain threatening bound for Cleopatra’s bistro. The sooner the Met Office gets their £99 million computer upgrade the better!
Anyway, the coffee at Cleopatra’s is an improvement on Hildegard’s and the service is just as good. There were nine of us but, apart from Steve T and John, the rest were on personal local rides. So we three set off bound for The Raven in Tilley near Wem. Ivan had been there in Jan 2015, but the last time for me was in late 2011. As soon as we set off the rain came and was on and off all the way to Whitchurch. The route out was via Tilston, Duckington, Norbury and Marbury.
Around Whitchurch we take the cycleway out to Alkington, which, at a surprising 420ft above sea level, was the highest road for today. We enjoy a further 10 miles of tiny lanes to arrive in Wem from the north. Exiting Wem for Tilley, I suddenly had a brainwave: “Have either of you been to Sleap airfield?” “No” was the reply, “Shall we go?” “Yes, please”. So, not knowing about the treat that they are in for, we motor down the main road for the 4-mile loop into the airfield. 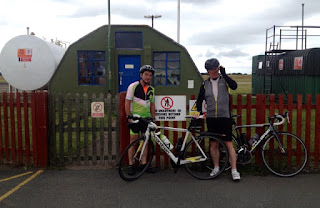 The cafe doesn’t disappoint with excellent quality, and quantity of food at very reasonable prices, coupled with a control tower side view of the aerial operations. Now that the runaway exit shortcut to Loppington is forbidden, I plot a circular route, initially southwards back via the middle of Myddle. We now enjoy 17 miles of tiny Shropshire lanes working our way back via Welshampton and Penley to Bangor on Dee. The sun is out very briefly as we head northwestwards. Arriving back at Cleopatra’s after 62 miles at 16.4 mph, we provide a bike-purchasing consultancy to “mein host” as tea and cake are consumed. The only disappointment of the day was the unexpected rain and late arrival of the sun. With 87 miles completed to home, it was a useful warm up for the 100 miler next week!
See route map and/or gpx file download.
CA