A day of forecast sunshine had brought out a crowd of new and prospective members to the Meadow Lea café. There were the non-riders: Dave & Liz P; the “doing their own thing”: John W and Bryan; the riders: George, Macca, Clive, Keith, Dave H, Andy W, Tom, Paul, Jim, Trevor, David M and myself; and the prospective members: Anne, out for a short taster and Linda, wishing to try a ride. Unusually, I was the only one with a planned ride and so a large group of 14 set off from the café heading for Higher Kinnerton.

We cycled through Waverton and Tattenhall to Churton, by when 4 of the group had turned off on their own planned shorter routes.  A little later Tom and Paul took off wanting to stretch their legs further.  So a more manageable group of 8 passed through Farndon, Pulford and Doddleston to arrive at the Royal Oak after 24 miles.  We had tried calling the pub to book a table, but no-one answered, so it was with some relief we discovered that it was open, it was serving food, and it could accommodate 8 cyclists.
We were efficiently seated in their dining room, and served reasonably priced light bites at around £7-£8 a head. I believe this is a new venue for CER, being too close to our starting points to have been used before, but it proved a good choice. As usual the conversations ranged far and wide, but then dwelt on a new topic for us – pharmacology – including the benefits of an emergency aspirin.

Leaving the pub, we headed towards Hope before striking north on good lanes to then turn towards Buckley just before the A55.  We made a right at the Parrot Pub, through Ewloe on an exceptionally rough surface besides St David’s Park, on to Northop Hall and then down the steep and long roads into Connah’s Quay. Here we said goodbye to George and then crossed the Dee by Hawarden Bridge, and returned by the Greenway, gradually losing riders as they took their own routes home.

Most of us sped by someone standing on a ladder, but Macca had the curiosity to talk to them. He reports: On the Greenway near Saughall one of the Sustrans Millenium mile posts was being carefully painted to highlight the various features on the story displayed.  Macca stopped to speak to the painter, to find that Ann from Stafford is a Sustrans volunteer who is painting these mileposts in N Wales and the NW.  Each post takes her 3 days and she started 9 posts ago near Bangor – there are 1000 in the UK, so she will be at it for some time. Most posts are still the original boring matt black.  By painting them various colours, the stories which are depicted on each post by one of 4 original artists can be revealed. 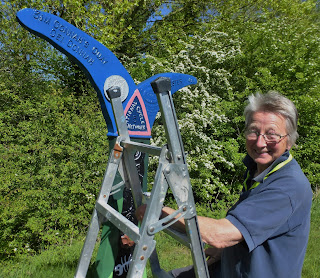 After 50 miles of riding only Linda, Dave H, Keith and myself arrived back at Meadow Lea café at about 3.45pm.  I was hoping for coffee and cake, but was told that the machines were off and they were clearing up.  It was disappointing to find that a café which should be open till 4pm stops serving well before.  Anyway, this doesn’t detract from a good ride, and new pub and lots of sunshine.