I was definitely going to be in “sheep mode" today. There were a lot of us at The Gallery cafe, so many in fact that three groups were set up. The Moderate group consisted of Dave H, Macca, Bob, Keith, John M and myself. It became clear that, after the suggestion of the old favourite lunch venue of the “Eagle and Child” at Gwaenysgor was adopted, I would now be a shepherd instead of a sheep! So off the usual way out towards Ewloe Green, and then we take Green Lane which leads to Magazine Lane. Here Bob succumbs to a puncture and a rather cut-up tyre. He wisely elects to withdraw, and go looking for some 25 x 700 tyres. I’ve now “lost” one rider.

So off to Northop the usual way, where we stop as I give the group three options of getting up onto the Halkyns. They take Option 2. So after a short foray along the A55, we turn ever upwards passing the Britannia pub and the grand gates of Halkyn Castle. Macca is feeling it today, and he elects to call it a day and protect his knee joints. Next time we will see him is in October after his stay in Oz babysitting!  So now I have “lost” two and feeling glad my name is not Ernest and that Lady Bracknell is not around!

We’re now up at nearly 900ft passing the Windmill on our usual way to Brynford. After a brief stop, I mention the Pet Cemetery cafe and, as no one else has visited it before, I suggest we stop there on the way back. So through the golf course at Calcoed to Pantasaph, we now pass the Pantasaph Franciscan Friary, which more of later. Gorsedd comes and goes as we take A5151 towards Dyserth. I like this road as there are fine views all round - OK there is a bit of holiday traffic but it is a wide road. A quick turn right soon brings us to the “Eagle and Child”. The food comes quite quickly as my pint of Hancock's bitter disappears quickly! The talk is varied as ever, but there is a useful discussion on man-sheds and decluttering. 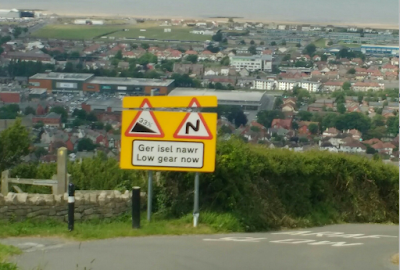 It’s soon time to leave after a modest 22 miles. I suggest we try the cafe at the Friary on the way back, or failing that, the Pet Cemetery cafe. We cycle up to the viewpoint over Prestatyn before running back down to Llanasa and onto Gorsedd. We are close to the cafe when the White Knight of the Road, aka Dave H, pulls up after seeing a car stuck in a driveway and a group of people milling around. The pungent smell is indicative of a burnt out clutch as the Range Rover can’t get up into the drive. We offer to push it up and into the drive, but clearly we haven’t eaten spinach for lunch and it stays just off the road blocking the driveway. So we leave it where it is and thence arrive at St Pio’s Cafe at the Friary. It is now open every day until 1700, so we reluctantly order cake and drinks, which were rather good. A cafe to remember. 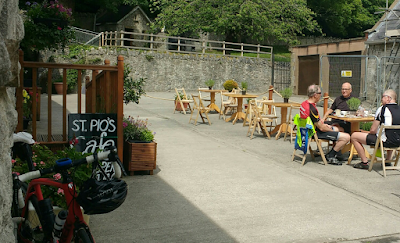 Off again, we cross towards the Babell Road and are soon up at 900ft by the Halkyn Windmill. I suggest we go back via Rhosesmor, Sychdyn then Alltami, through Buckley and thence to Hawarden. In Buckley I miss the Burntwood Lane turn back to Hawarden, but no matter, as we speed down through Drury. As we speed down the A550, we pass Ken going in the opposite direction back to Rossett - so that means the Brisk group are back at the cafe.

So 22 miles, out and 24 miles back and nearly 3000ft of climb, it’s a bit careless of me “losing” two riders but, we four were happy enough in the sunshine with the magnificent views that the Halkyns afford to feast on all day.