When Dave H and I arrived at Rose Farm, the car park was unusually full. The reason for this became apparent when we entered the café – it was full of middle-aged men eating full breakfasts and drinking beer! What was all that about?

Dave M and Roy were already drinking their tea or coffee and we were soon joined by Andy B and Steve Hu. This turned out to be the full complement of CER members for the day. It would seem that the strong wind and promise of rain was enough to put others off. Dave M was on chauffeur stand-by duties, so there would be only five riders today.

I’d found a ride down to Marbury which had been led in November 2018 by Steve Ha. The Swan was open and so I’d booked a table for lunch at 12.45. We set off for Cotebrook, Wettenhall and Nantwich in light rain, heading into a strong south-easterly wind. All went well until we’d done about 7 miles and had reached Wettenhall. The gears on my bike suddenly dropped onto the small ring and I couldn’t persuade the chain back onto the big ring. As I stopped to investigate, Andy B arrived holding my left hand side crank and pedal which had fallen off a few yards back! At this point I thought I’d have to abandon the ride, but, fortunately, Andy had a 10mm allen key in his capacious tool bag and we were able to screw the crank back on. By this time it was raining hard and so we agreed to press on and investigate further at the lunch stop, even though the chain was still stuck on the small ring. 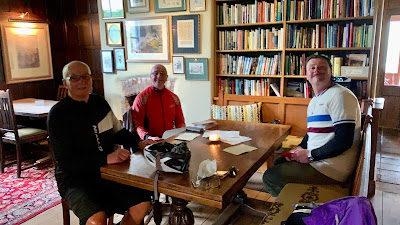 The rest of the journey to Marbury was uneventful, although we were very wet by the time we arrived. Andy had demanded that there be a blazing fire at the pub and lo and behold there was a big log burning stove next to the table we were directed to - perfect! Drinks and food were soon ordered and were of excellent quality when they came. Dave H ordered the ‘large’ fish and chips which looked as if would have adequately fed two. The staff were friendly and helpful, even if Steve Hu couldn’t follow the directions to the toilets as he doesn’t yet know left from right. Happily, Roy put him right!

Further investigation of my crank problem after lunch revealed that the bottom bracket was loose and moving from side to side in the housing. Efforts to tighten it up were not successful, so we set off back with fingers crossed that it would hold together until we got back to Rose Farm.

Our route back took us via Swanwick Green, Chorley and Brindley. The rain had eased off and the wind was (mostly) behind us, so we made good progress. Passing through Bunbury and round Beeston Castle we arrived in Tarporley where Steve Hu carried on for home whilst the rest of us made the obligatory stop at The Old Fire Station. By the time we came out, it was raining hard again. Roy headed for Runcorn and home whilst Andy, Dave and I headed back to Rose Farm. From there, Andy would have a further 20+ miles in the rain before he reached Mold and home.

41 miles covered in less than ideal conditions and with a ‘mechanical’ which could have been terminal, but a good day out nevertheless.