As we were standing outside Delamere Station Café (officially “Delamere Station House”) listening to Dave H telling us the weather forecast was fine except for showers in the afternoon, some of us looked up at the angry dark clouds building up behind him.  It started to rain as the riders set off.  Steve T and I had both planned a route to Goostrey, and so between us we led George, Mike G, Andy and Steve Hu.

We rode out through Acton Bridge and into Comberbach. By now the rain had stopped. Here we avoided the busy and potholed road to Great Budworth by heading NE and then joining the road to Pickmere. Crossing the A556 and heading into Lower Peover, Mike suggested we stop at the “Tree of Imagination” which was created over 5 years ago and is well worth a look and a photo or two. 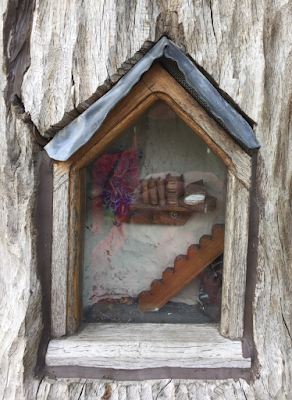 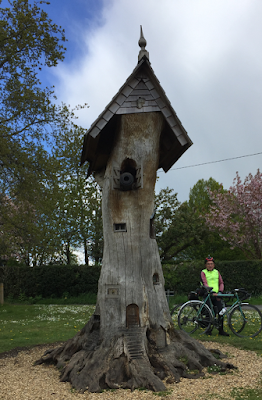 Next was a section of small very rough lanes where we met a road mending crew – they had an impossible job if they were going to try a mend all these surfaces. Crossing the A50 heading for Goostrey, we turned the corner at Boots Green, noting that the lane going straight ahead could provide an alternative way into Goostrey but would need exploring on a dry day as it peters out into a track.

In Goostrey we headed for one of the two pubs. Prior investigation suggested they might be open.  However, we found The Crown did not open till 3pm, although the Red Lion was open! Or rather it had an open door. Steve T walked in, wandered around, shouted out, but no-one was there.

Our alternative was to stop at the Trading Post for coffee and sandwiches. This didn’t go to plan either. George and I headed for the Trading Post, but lost the rest of the group.  They had been seduced into visiting another stop in the parade of shops – Pastimes.  I think this is a fairly new establishment and provided them with good homemade fare.  This is a café and has some very good reviews on the web.  Although the rain had stopped sitting outside in the cold did not encourage a long stay at either establishment, and soon we were on our way again.  My knee was playing up so we took a slower route back.

It was on our return that the weather worsened, the wind picked up, the temperature dropped and it started to hail. We took the ‘B’ road into Lack Dennis and then into Davenham. Steve T led us into Hartford and crossing the A49 on to the climb up Norley Bank, through Norley and on to Hatchmere. Here, we parted ways, with the rain and hail still falling.

We covered 42 miles on an enjoyable ride despite the afternoon weather.