Having braved the sheep muck section of Burton marsh Alan O presented a route from Ness towards Chester taking in the stunning sights of the Stanley Oil refinery.

When everyone was refreshed Steve Ha advised he had an appointment with hills in Wales, Jim and Trevor planned their own route and Peter & Dave M did their own thing.

Within five minutes of leaving the warmth of the cafe the intrepid crew were riding through Ness and skirting Neston via Little Neston on lovely small lanes. The leafy lanes of Raby were soon dispensed with as we approached Eastham. At this point George was regretting riding so close to Steve Hu who insisted on regaling George with a blow by blow account of all buildings points of interest and history of Eastham.

A sharp right off ferry road took the group down Bankfield drive and onto the service road which parallels the start of the Manchester ship canal. 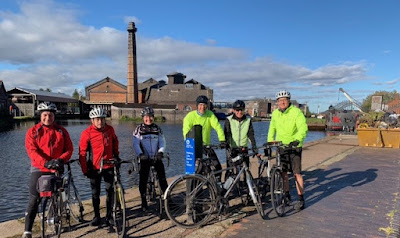 At Ellesmere Port road captain Alan led the group down to the boat museum and a glance at the Manchester Ship Canal. From here the ride took on a very industrial setting as we rode through the old Shell Stanlow site now owned by Essar. We were surrounded by fuel pipes tanks and some interesting smells.

A sharp right heralded the return to country lanes as we bumbled through Elton, Wimbolds Trafford onto Bridge Trafford for a pub stop at the Shrewsbury Arms.

Whilst most of the easy riders were trying to establish the provenance and make up of “Hunters Chicken” Andy B had removed his wheel removed a broken spoke, refitted a new one and re tensioned the wheel.

At this juncture Jim and Trevor arrived and bribed the kitchen staff to serve them first, on seeing Andy’s plight they also served him first leaving the rest of the group wondering “what do I have to do to get served here”

Replete with five portions of the aforesaid Hunters Chicken we rode the lanes into Upton Croughton to Little Stanney. This route provided many glimpses of Chester Zoo. A quick spin along the stunning section of the Shropshire Union Canal took us effortlessly to Blacon. At this time Bavarian Mike held the group transfixed with the design and history of the new Crematorium!

Now all roads were left behind with a blast along the Millennium Greenway, only stopping to notice the improvement in road surface when we entered the privileged land of our fathers.

As we approached the Toyota park the group finally split up with those returning to Ness Gds and others going further into Flintshire.

Thanks to Alan for finding a great route and Mike for adding tweaks to keep us mud free and safe.