The starting point for today’s ride was Meadow Lea, and a good number of members turned up.  I think three rides set off: a brisk one, a moderate one with Neil, Fiona and Elwyn, and one I led comprising Dave H, Andy B, Alan, Steve T, Trevor, Peter and Andy W. Daylight hours are shortening now we are in mid-November and there were concerns that we completed our route before dusk.  Andy B, who has the longest ride to our starts, was well-prepared with a new jacket featuring 6 LEDs front and back. 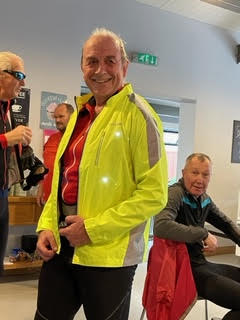 I had planned a route to the Salt Barge at Marston, a pub where we had enjoyed many good lunches, but which we hadn’t visited since the start of the pandemic. Our route out took us east up the A56 and then past one of our old start points, Manley Mere.  The road past here was as rough as ever, but it was good to travel the old familiar lanes: the Sugar Lane bend and the climb up past New Pale. A steady drizzle began to fall but then passed on. We sped down into Kingsley and took the quickest route to Acton Bridge. We said goodbye to Peter and Andy W and then we rode on through Comberbach and into Great Budworth. Then we took the lane to Higher Marston and finally crossed the Trent and Mersey Canal to arrive at our destination. Regrettably, we found the Salt Barge had stopped serving Thursday lunches, though the landlady suggested the Spinner and Bergamot in Comberbach. Although we had passed by this earlier, it was not far off our return route.

We passed through Marbury Park, exiting right onto Marbury Road and detouring by just over a kilometre we arrived at our new pub. We were efficiently served and were soon tucking into lunch – the favourite being the small fish and chips. I don’t believe we’ve ever been disappointed by this pub.

We continued back down Marbury Road, past the Anderton Boat Lift, over the canal again and the River Weaver, and right at the lights through the new estates of Winnington. Our route out passed several roadworks, none of which particularly inconvenienced us.  Now temporary traffic lights, combined with lots of traffic (and angry drivers!), slowed us and separated us. We finally cleared the congestion by turning off onto Hodge Lane. Then on to a dog-leg crossing of the A49, and a familiar return through Norley to Hatchmere. We sped downhill through Delamere Forest and on to Ashton Hayes. Soon we were on our outward route along the A56. We arrived back at Meadow Lea before 4 o’clock with 46 miles covered and in time for last orders.