It was a shame Neil wasn’t present when we decided on a route to his much-recommended café: No 18 The Park at Wrenbury.  We were starting from Alison’s in Tattenhall, where we had a good turnout of 12 members.  David M was resting, while Dave P was only riding out with us for part of the route because he had no lights and wanted to get back before dark.  That left 10 riders: Steve T, Steve Hu, Alan, Roy, Trevor, Andy B, George, Clive, Mike and myself.

We set out south-westwards towards Barton and then Stretton and Tilston. To avoid Malpas we turned eastwards before the hill, towards Cholmondley, at least most of us did. The follow-my-leader system broke down and Trevor and Andy carried on to Malpas.  Assuming they knew our destination and hoping they would meet us there, the main party continued from Chorley Bank, over the Llangollen Canal and into Wrenbury.  We cycled slowly through the village looking for our destination. We found it on the left beside the Primary School, just before the turn to Wrenbury Station.  We had arrived at noon having covered 18 miles in a “moderately brisk” pace.

It looked smart as we entered and they found space for the eight of us, just before the missing two, Trevor and Andy turned up.  Pleased to be re-united, we reconfigured our seating with three sitting outside and the rest around a large table. The food was a hit, with most ordering the Eggs Benedict. There was some disquiet inside when the outdoor party were served well before us, but we passed the time with reminiscences of earlier days in the club and George’s memorable first ride. Food was hungrily consumed and we thought that this café deserved future visits.  The only downside was when I got locked in the lavatory, only to be released by brute force. 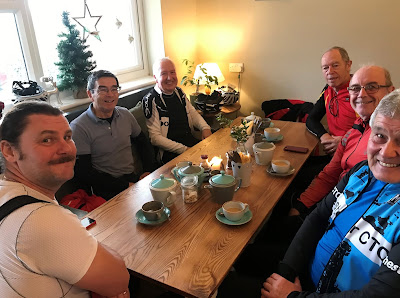 Our return took us to Ravensmoor, Swanley and Bunbury, where we decided not to stop at Tilley’s having only covered 10 miles after lunch.  We said farewell to some riders on the return journey and arrived back at Alison’s by 2:30pm, early enough, for once, to take refreshments.

Our total distance was 35 miles, which we had covered in mild, dry conditions.  Something about the day encouraged a relatively speedy ride: the surfaces seemed smooth; headwinds negligible and hills slight. An excellent day out on generally familiar lanes, with a new lunch stop discovered.