Approximately 19 of us at Meadow Lea today. The cafe was unusually busy, which slowed the service somewhat, allowing us plenty of time to form into 3 groups.

I offered a flat 40 miler to Commonwood Fisheries with the intention of lifting the pace for a change (wannabe brisk pace- Lol) This appealed to Steve Hu and Allan and after a bit of a discussion, Steve T as well.

Steve H mentioned the Bhurtpor Inn, much to the delight of Dave H, who claimed he never bribed Steve at all, despite the rumours- Lol. And of course the Brisk boy’s, which I think were 4, did their own thing to Holt.

My route started with a meander towards Cheshire Oaks at first, which prompted a shout from the cheap seats -  “the shopping ride”, which I suspect was Steve Hu or was it Allen? - Lol. Lovely quiet lanes circumventing Chester, past the very nice Rake Inn (another large Brunning & Price pub). It’s worth remembering, as it’s a good spot to wander off to while you wait for the Mrs to complete her shopping fix, as it is just across the main road, from Cheshire Oaks, in Rake Lane.

I think my little band of men were pleasantly surprised on how close we got to the infamous shopping centre without actually crossing or going on the main road. It wasn’t long before we slipping by Chester Zoo ( just out of sight) and passing through Saughall, heading for the old Saltney ferry crossing, which as usual showed us the true wind direction, although a light Southerly one.

I decide to go left after coming off the bridge over the river Dee, aiming to skirt the suburbs of Saltney & Lache via a nice little shortcut pathway that dropped us into Lache Lane, heading for Dodleston.

I think it was at this point that I raised the pace a bit more, after Steve Hu suggested we were breaking Steve T in too easily- Lol.

I took that to mean the pace was not high enough, so off I went, only to find nobody followed. It transpired that Steve Hu meant the opposite( oops- Lol).Steve T thought the pace was much closer to what the Brisk boy’s normally do, which prompted me to slow it down a bit. However, it wasn’t very long before Allan decided he wanted to lead and gave me a nice break from the now stiffer headwind    (truth be known my quads were feeling my previous days fast hilly ride- Lol).

We are now rolling through some favourite lanes, which took us through Rossett and halfway up Marford Hill, where I turn left, passing Pistol Hill, in order to take the direct and more scenic route to to Borras. As we pass Pistol Hill, I offered a diversion up said hill, which was promptly declined.

This prompted me to regale about the time I climbed Pistol Hill 5 times, when test riding  3 models of the Whyte bike range that I did eventually buy, although not from Alf Jones, where I was actually road testing from - naughty me- Lol.

We now only had a mile to drop down into the Acorn Cafe and my promise of a very nice halloumi wrap and in the case of Steve Hu, the team chips as well- Lol. Conversation was well varied, to the point that I can’t remember any of it. I must have been to engrossed in my wrap- Lol. However, I do remember the discussion about the difference between my hot chocolate and Steve T’s (we must be getting old- Lol). That said, the long and short of which is that it is one of the best hot drinks machines I have ever come across, just don’t get to close with your fingers- Lol.

So, off we trot, leaving the staff putting up bunting for the weekends festivities and both Steve’s asking, “ which way are we heading back?” We had done 26 miles to get to Acorn Cafe, so I figured a direct way back to Meadow Lea, in order to get just 40 miles in, as I had more to ride as usual. We quickly hit Holt and up through Farndon, heading left toward Aldford.  I lead us out through the small hamlet of Churton and Aldford, the latter being my favourite village. This gave me the chance to show Steve T the unusual decorative house with all the gnomes and animal figures on the lawn ( it was in fact the subject of one photo posted in the previous weeks blog)

Our brief interlude, admiring the colourful architecture within the village of Aldford, now over, we set off all commenting about how long it must take to mow that lawn. However, no sooner had we finished that little chat, when we pulled up suddenly to capture todays team photo, after Alan spotted the fairly grand guilded gates of Aldford Lodge (below) 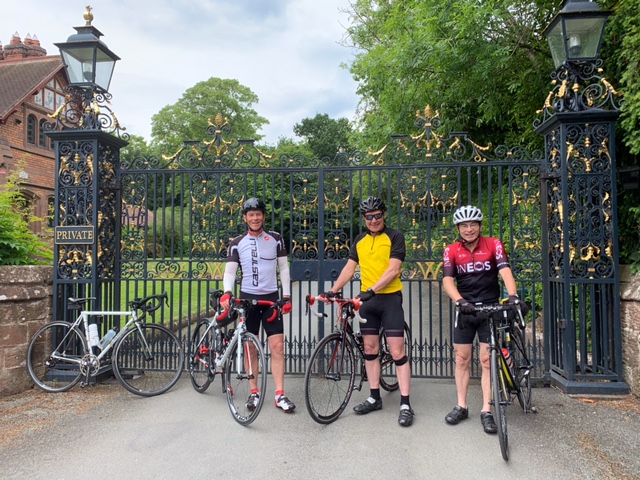 I pointed out that the amazing floods of 2020 had actually come up to the gates, right where we were standing, after the bridge walls had collapsed. I actually rode out on that day to inspect the floods at Farndon and Aldford bridges. Suffice it to say, I had to turn back at both of them, my route only ended up, a very wet, mucky, 20 miles that day- Lol. As usual I digress- Lol.

We are now cracking on a pace toward Saighton, via Bruera, with a good tailwind. Steve Hu decides to crack on up the hill, past the college, with us all on his tail. I suddenly realised why, as I spotted 2 cyclist ahead, that we were closing on. Steve clearly had his sights set- Lol.

Yet again I surprised Steve T, at the top, when I didn’t turn left toward Huntington, but headed through the village, pointing out the multi coloured rhino figure in the school yard, whilst admiring yet more of the Duke of Westminster’s traditional properties, all nicely painted in his red oxide livery.

This prompted Steve to mention that he hadn’t ridden through there before, which now surprised me- Lol

Barely a mile later we are crossing the A41 for Waverton. We head for the usual left turn that leads up to Vicars Cross and couldn’t help but notice it is another Rake Lane.

At this point I decide to turn back for home as Steve T confirmed he knew the way back for the last 4 miles.

I had 7 miles of light headwind home, which I was feeling, as mentioned before. All in all a great day, despite my slightly stiff legs.

The guy’s hopefully got back with exactly 40 miles done. Mine was 59 in the end. Thoroughly enjoyed the company and the day and look forward to next time.