Delamere Station was the starting point for today’s ride and quite a few Easy Riders turned up in the warm sunshine. Although a few mod riders were absent, we formed a small, but shrinking party. Peter was out just for a coffee; Andy B was out for the first mile or so as he had to be back to prepare for a trip to France; and David M was out until we passed a friend’s house where he popped in to say hello.  This left myself, George, Alan and Dave P on his own without Liz.

Our destination was The Dog at Peover Heath, one of our regulars. Given the good weather of the last few days, I decided to ride out to Acton Bridge along the path beside the Weaver Navigation. I remember one previous ride when this route was blocked by three horses with their backs to us, and it took us sometime to persuade them to move.  No barriers today, just a tranquil picturesque scene which demanded a couple of photos. 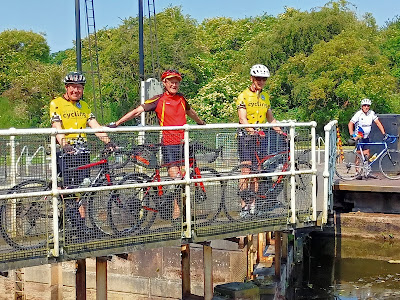 Passing the Leigh Arms, Willow Green Lane was full of vehicles and the place was swarming with teenagers carrying large backpacks – obviously the start of a DoE expedition. Weaving through, we passed onwards towards Comberbach, and continued northwards avoiding Great Budworth. Signs for the Cheshire Show were plentiful as we swung round to Pickmere and Higher Wincham, and after crossing the A556 arrived in Lower Peover. Despite the common name we were still seven miles from Peover Heath, as we turned left through Ollerton and then swung back to Marthall.  We approach the posh environs of Over Peover and turned into The Dog at Peover Heath.

Always a popular destination, today many were sitting outside enjoying the sunshine. We chose to sit within, similarly busy, and were shown to our table. Our waiter took our drink and food orders without writing them down, and delivered them correctly to each of us – an impressive memory.  Weetwood beer was popular and most of us ordered from the light bites menu – all fairly substantial items for less than £10!  Good value is becoming something of a rarity with today’s rising inflation.  We wondered how so many other customers of working age could be present at midday – they were unlikely to be railwaymen currently on strike. We spent some time discussing Switzerland where one of Dave P’s daughters has been teaching for many years, a wealthy country doing quite well for itself and with many foreign workers from the EU and elsewhere.

Soon it was time to go. Previously when I’ve ridden back from The Dog, the route had been south into Goostrey, west through the village and then back north and on to Lach Dennis – that is the long way round a rectangle. There is a bridleway that cuts out this loop and given the dry weather, today was the day to try it. This starts a couple of kilometres north of Goostrey near the Blackden Lane/Red Lane junction.  Alan pioneered the way forward, steering a narrow winding path between high nettles and other vegetation. Overcoming exposed roots and dips in the track we emerged after about a kilometre onto a stony drive, which eventually gave way to tarmac, and before long we were at Boots Green and back on our usual route home. This is worth riding as a novelty and it cut about 2.5 miles off our journey, but it would not be viable on road bikes in anything other than the conditions today.

Our route took us onwards through Lach Dennis, Davenham and Hartford. Then it was the dodgy crossing of the A49 south of Weaverham, the steep climb up Dog Lane into Norley, and then back to Hatchmere where the group split.  Our return had been equally warm but the skies had clouded over. Total mileage was 47, on an excellent day’s cycling.